2017 sucks, everything’s scary, America’s crumbling into ruins and taking the rest of the world down with it, blah blah blah; this we all know and, if you don’t, well, I’m sorry to break it to you. But what do we have? We have eloquent essayists and brave cartoonists and that incredible kid who set her grandpa straight at Thanksgiving when he complained about Canada taking too many refugees. We have millions of women in pussy hats. And comedians. We can’t underestimate how much the comedians mean right now, if only for their inspiringly insubordinate refusal to shut up. The Second City Toronto is a tourist spot where nice middle-aged folk from southwestern Ontario stop in for a show on their big city trip. Those who wander in under our planet’s current circumstances will find themselves lulled into a nice sense of amusing security by a catchy intro song and a fun sketch about how hard parenting is. Then the real work begins. The night’s many big laughs serve as the spoonful of sugar that makes the medicine of incisive cultural criticism go down. 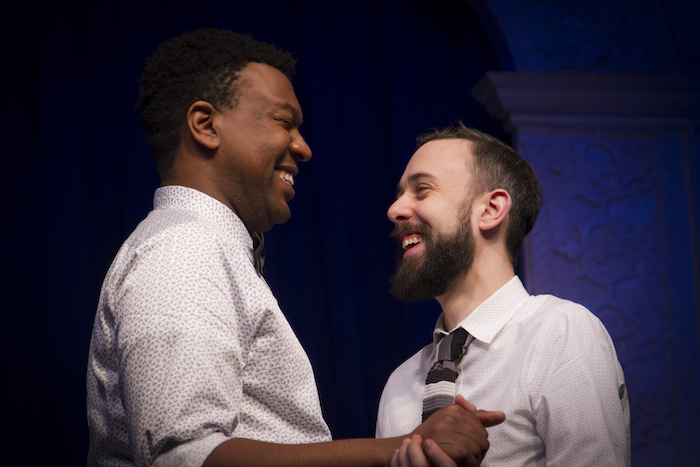 Everything is Great Again builds on the edgier, more socially aware ground broken by its predecessor Come What Mayhem and delivers a swift, smart and expertly constructed night of comedy that’s to date the best thing I’ve seen at Second City. Returning cast members Brandon Hackett, Lindsay Mullan and Ann Pornel are joined by Paloma Nuñez, Colin Munch and Devon Hyland. The rewards of inclusivity are seen throughout the whole revue. Nuñez, who thanks her husband and son in the program, anchors a pair of sketches about the realities of marriage and parenting (a perspective rarely heard on the singleton-skewing stage) then plays the embodiment of Mexico singing a ballad to his cruel former lover America. Hackett and Munch play a pair of would-be lovers awkwardly navigating the extremes of modern relationship expectations brought on by Grindr and monogamy culture. Nuñez, Hackett and Pornel go on a drug trip that makes them reconsider the parts of their cultural heritage they’ve turned their backs on (Pornel’s uncertainty about the correct spelling of “The Philippines” is a particular highlight). Munch wears a “Make America Great Again” hat to career day and gets grilled Spicer-style by a group of diverse schoolkids. Pornel gets shit done while her white boyfriend (Munch again) rants self-righteously on her behalf. Nuñez and Pornel play lifelong best friends in an Up-like silent montage that literally made me cry (positive female friendships and sad adult realities and contemporary disconnection and the slow march of time! *sobs*). Longer pieces are followed by short stabs of pure comedy (“I wanna know who Doug is”!) and complex political scenes are juxtaposed with absurd, physical bits like the aquarium joke that keeps popping into my head and making me laugh at inappropriate times.

Unlike so many artists in this city, the Second City mainstage cast isn’t preaching to the choir. Their audience (opening night aside) isn’t the usual suspects who’ve already liked these points in a Facebook post. Second City shows used to be mostly Celine Dion jokes and Don Cherry references and there’s a non-zero chance that that’s what a lot of the audience is still looking for- easy, familiar, non-threatening laughs. But this cast is too smart (and maybe a little too scared for the fate of humanity) to give them anything less than the truth. That’s great. Everything else might suck, but Everything Is Great Again is great. This “again” shit is ridiculous but, at least in this one arena, things are actually kind of great in a way that they weren’t as much before. Thank god for the comedians.