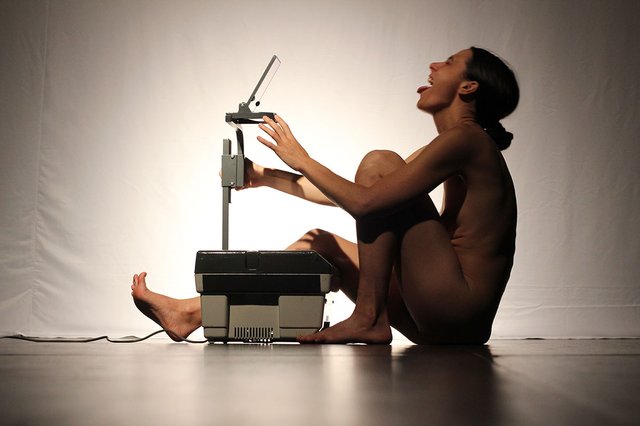 Multiple Organism (A-)
Puppetry, shadow-play, nudity, digital cameras, tooth brushes and breast-filled vistas all combine to make the most surprising and playful show I’ve seen at Fringe so far. Imagine if South Park were less about libertarian politics and more about the sexual adventures of a young woman and two of her toothbrushes, and was being animated live in front of you, and you may have an idea of what watching Multiple Organism is like. Jessica Gabriel and Chloe Ziner of Mind of a Snail use projectors, cut-outs, and their own bodies and voices to create a surreal and sexually exploratory work that skips its way into struggles over gender, orientation and acceptance, without ever losing its light touch. It begins with a hilarious projection of Ziner’s lips onto Gabriel’s chest, whose nipples are covered by eyeballs. It’s inherently silly but expertly pulled off, the body itself as our guide and sometimes conflicted protagonist. After a hilarious monologue which includes a use for dental floss that you have perhaps never before imagined, we are lead through a series of sequences set variously in a bathroom, the toilet itself, and a mystical landscape reached only through plumbing – these settings are projected onto a screen at the back of the stage. All of this is accompanied by a mostly original electronic score, which provides a funky, playful backtracking – – kudos also to the strong sound work. Much of the pleasure of the show comes from watching the duo, who work off of each other extremely well (both are responsible for manipulating cutouts, with Ziner provides a range of voices and Gabriel frequently being placed smack dab in the middle of the cutout landscape). Their work is confident yet extremely playful, and while this might seem an odd comparison to make, there’s something about their aesthetic that makes the whole thing feel like a queer performance piece from the 20s – it feels like we’ve stumbled into some Berlin nightclub at the height of the Weimar period. Questions of dysphoria and belonging are referenced by the increasingly vulnerable body character, and then blended elegantly into the cutout work, leading to a simple but moving final image. This is genuinely scrappy, vibrant fringe theatre, and a pleasure to watch.

The Miserable Worm (B+)
The plays of Anton Chekhov are seen by many theatre artists as primary texts of modernism and naturalism, and for good reason: when performed with the right balance of sensitivity and humour they become deeply alive works whose characters exhibit dissatisfaction, aspiration and contradictory behaviour in ways that are profoundly recognizable. The young cast, under the direction of Patrick J. Horan, has brought one of the writer’s earliest and most challenging works to the Fringe in a production that modernizes and localizes the text while maintaing a distinctly 19th century Russian energy, and often succeeds in manifesting Chekhov’s unique theatrical energy. A contemporary adaptation of his famously lengthy and ungainly Platonov, writer Justine Christensen (who also plays the title role in a production that casually flips the gender of nearly all of the characters) has both the luxury and the burden of choosing material from the massive original to mould into her own creation. Even the most naturalistic productions of Chekhov tend to maintain the original turn-of-the-century settings of his works, but here Christensen has hauled the story into the present, queered many of the characters, and set it in Toronto no less. All of this she achieves with admirable elegance, adding slang and loosening up the dialogue without letting it lose the necessary ennui. While you can feel the teeming energy of the other material that has been kept offstage in this brief version, the adaptation does a good job of streamlining the many interpersonal dynamics of its eight-person cast into a short and sharp comic tragedy. The story centres around a reunion of friends in the large house of Anna Petrovna (Tymika Mckenzie-Clunis), a widow and one of the few officially uncoupled characters in the play. The status of these relationships prove to be quite flexible however: nearly everyone is having an affair with each other, or are seriously considering doing so. At the centre of it all is Platonov herself, obsessed over by many but unable to reconcile her intelligence and charisma with anything approaching sustained contentment or kindness. Even in its distilled format, the actors have a wealth of material to get through, and the performance I attended (one of the first) often seemed to be spoken at lightning pace, particularly by Christensen’s Platonov. This is probably in part a race to keep the play under the Fringe time limit, and also a means of highlighting the lightning wit of the show’s characters, but there are a few occasions where it works against the show, as moments that could have used an extra breath or two go speeding by as another line is unfurled (and sometimes swallowed) at a crackling pace. Scenes are interspersed with songs performed by the cast ranging in genre and era (music direction by Lucas Penner) – although they lend a nice edge of mysticism to the evening, there are one or two instance where the music breaks threaten to interrupt the flow of the show. Still, all actors all do strong work, both as an ensemble and in their solitary moments – to my mind Mckenzie-Clunis and Viv Degraves as a puckish romantic whose energy masks a deep melancholy, brought the most interesting energy to the show. Taken as a whole the intelligence and vitality of this production and the work of its young cast are exciting to witness, and clearly stems from a deep appreciation of Chekhov’s writing and his humanism.

Universal Horror (B)
Hollywood is currently attempting to revive the monsters made most famous in cinema by the Universal horror series of the 30s and 40s (the recent The Mummy reboot apparently acting as the kickoff for an interconnected universe of famous baddies), and this atmospheric dance show has its sights set squarely on those original adaptations from the Golden Era. Carlene Brick, Christina Plaschka, Jessica Round, and Dyana Sonik-Henderson of the Broken Rhythms Dance Company perform a series of pieces based on various movies and scenes from the classic horror genre, with relevant imagery projected onto a cinema-sized screen behind them. The first piece, a Lon Chaney Phantom of the Opera-inspired piece set to Philip Glass’s ‘Metamorphosis Four’, is backed by silent-film inter titles, appropriately scratched up to match the era; a Boris Karloff The Mummy homage set to Robert Henke’s [_Exit] and Kimmo Pohjonen’s ‘Ohimo’ features their moody dance backed by black-and-white shots of pyramids and tombs. Such visuals (videography by Michelle Munkittrick) make for an effective contribution to the mood of the night, but mostly your focus is on the quartet of performers, who are excellent dancers and have created distinct, imaginary routines for each concept. Indeed there are moments when you wish the screen wasn’t quite so prominent: despite the evocative imagery projected onto it, it can sometimes feel like a visual impediment to the fluid and dynamic onstage movements. The projections for the final sci-fi number introduce a blast of colour, and it suddenly became easier to imagine a version of this show that is more dynamically coloured, and it made me wish there had been a little more visual fluidity between the screen and the performers. None of this takes however from this troupe’s strong dance work, or their fun and varied musical selections. Highlights include the afore-mentioned Glass piece and an eerie duet between two scientists – though perhaps the most memorable, for obvious reasons (you’ll know when you see it) is the Invisible Man bit – kudos to lighting designer Emma Dickerson for an amusing joke to break up the more intense action.