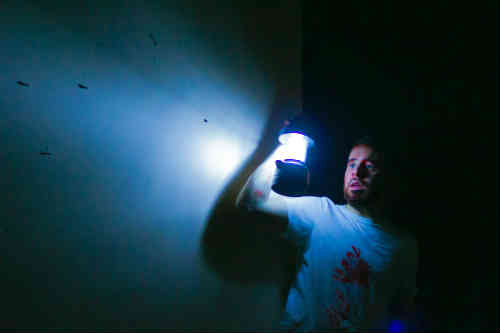 Show Your Flames (A)
I have no idea what this show was. A combination of performance art, comedy, lip synching, pop culture, dance and mash ups, this is an artistic expression that will confuse the hell out of you. Show Your Flames moves fast as an exceptionally energetic one-man show. There is no rhyme or reason for why he does anything (Why did he eat a tomato? A bagel?) but it doesn’t matter because it defies logic and somehow works. Devon Sanclemente, writer and actor, is a self-proclaimed weirdo, delivers an hour of absurdity, that should only be executed by cartoons. (Is Devon a real life cartoon?) If you want questions and want to escape any semblance of sanity, than get yourself to this eccentric showing.

Singing to My Left Kidney (B)
Inspirational survival stories are a genre that I can’t stand. I don’t like words like survivor or beat or fight or hope. Singing to my Left Kidney could have been just that: a made-for-TV tearjerker. Instead, it was a comedic telling of Ada Balon’s experience from cancer diagnoses to cure. It flits between hilarious to raw, causing moments of discomfort. But it’s cancer, not a magical pony ride, and it should be uncomfortable. The play is comprised of a cast of one, switching between herself and people from her cancer journey. There’s the Russian ultrasound technician, someone you really don’t want to be responsible for probing you; a seemingly good natured friend, played by a sock puppet, who turns into a Valley girl nymphomaniac; and a saucy personification of her cancer that was bitter and tenacious. The litany of characters is impressive and each uniquely created. Balon dug into what made each character tick and brought them to life. Best of all, and completely unorthodox, was her kooky kidney surgery interpretive dance.

Becoming Me (B)
Becoming Me was upbeat, fun, and energetic. It’s a musical (yes, with all original compositions written by the talented Stacy Collins) that narrates the challenges of depression and anxiety. The after-school special feel is endearing and the ensemble has the wholesomeness of the Scooby Gang. (Unfortunately, without a dog). It concluded with a good, yet expected, message that it’s OK to not be OK.The stand out performance was Alexandra Reed, the therapist, who carried the show with her phenomenal pipes, providing support for other weaker singers. Unfortunately, not all the cast had the chops for the musical complexity. The acting was adequate with a few characters, Michelle, played by Jessica Watters, and Liam, played by Kevin Doe, that executed their roles as if they were written for them. Where it fell short was the lack of depth with the subjection matter. Sure, Andrew, the lead character, felt sad and anxious, who wouldn’t with an abusive father, but his array of emotion stopped there. Because of the lack of grit, the story often lacked direction.

D&D Yoga (C)
What I liked about D&D Yoga was the innovative approach to yoga and Dungeons and Dragons. The show, which is a debatable term for this one, was an interactive yoga experience through a D&D storyline. At the start of the experience, we selected our characters and through the journey, which was enhanced by yoga poses, we killed a Gollum and a dragon, hid from goblins, and fell into chasms. Unfortunately, it fell apart on execution. The yoga distracted from the D&D and the D&D (score charts, dice rolling) distracted from the yoga. Although this was presented as a class, I still expected the instructor to provide a high quality dungeon master experience, which was sorely lacking. There is potential for this as a novel marketing tool for yoga but as a fringe show it failed to meet my expectations.