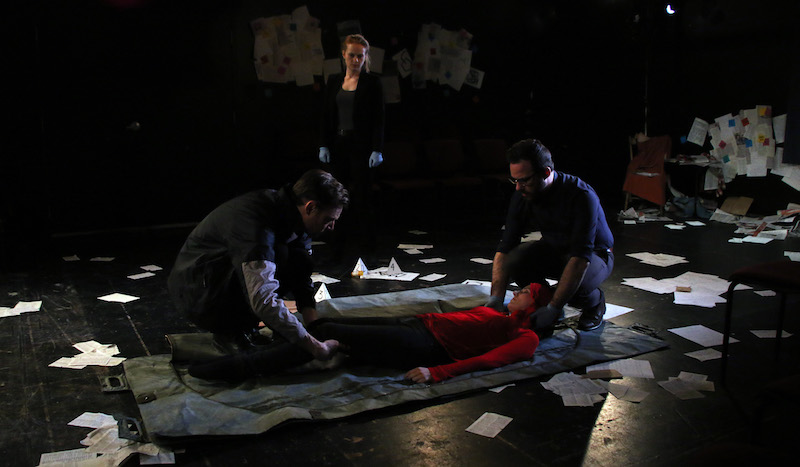 Walking into the theatre, the audience also walks into a crime scene. Chairs line the walls of Tarragon’s upstairs workspace, facing the middle of the room where a woman in a red hoodie lies on the floor, surrounded by pieces of paper. We’re in her apartment, but what has happened?

The pre-show for Circlesnake’s remount of Slip (currently nominated for three MyTheatre Awards for its original 2016 production) sets the scene and directs the focus of the audience right from the start. “Tell me a story,” says Lynne (Alex Paxton-Beesley), as she enters the apartment with her partner Mark (Daniel Pagett).

The first line sets up the theme: this play is about stories. But why do we tell stories? To explain? To comfort? To entertain? To challenge? All of these iterations come up again and again in different ways as the two detectives try to ascertain what has actually happened to the victim.

Paxton-Beesley and Pagett have amazing on-stage chemistry. From the start, they portray their work relationship with a level of depth that communicates both affection and history and gives the show an excellent emotional texture. Their final scene together is some of the most intense and moving theatre that I have seen in a long time.

The rest of the cast is incredibly strong too – Mikaela Dyke and Anders Yates do an excellent job of balancing the serious and comic elements of their sibling relationship. Nicole Stamp, the only performer who wasn’t in the original production, fits in well with the rest of the cast as both the victim’s girlfriend and the police Sargent.

The play was devised using a process of prompts and improvisation and initially created for The Box space downtown. It works fairly well transplanted to the Tarragon, though the bifurcated audience means that the sightlines and volume levels are sometimes patchy, and several jokes are lost on sections of the audience. Nevertheless, the storytelling in this production is so strong across the board, it’s very easy to be forgiving of these minor glitches.

*Spoiler alert!* The only thing that doesn’t quite sit easily with me is the very unlikely parallel between the victim and Lynne- their coincidental medical connection is poetic but not overly plausible. Having said that, it’s never entirely clear if Lynne’s final explanation of what happened is actually accurate. And we, the audience, might well ask: why is she telling this story? Is this coming from a special place of insight Lynne has, despite how fast she’s losing touch with the rest of reality? Or is this projection, is she telling the story of what it means to lose oneself and seeing her own story in a set of crime scene clues that don’t add up logistically but rather existentially? The play never really gives us the answers.