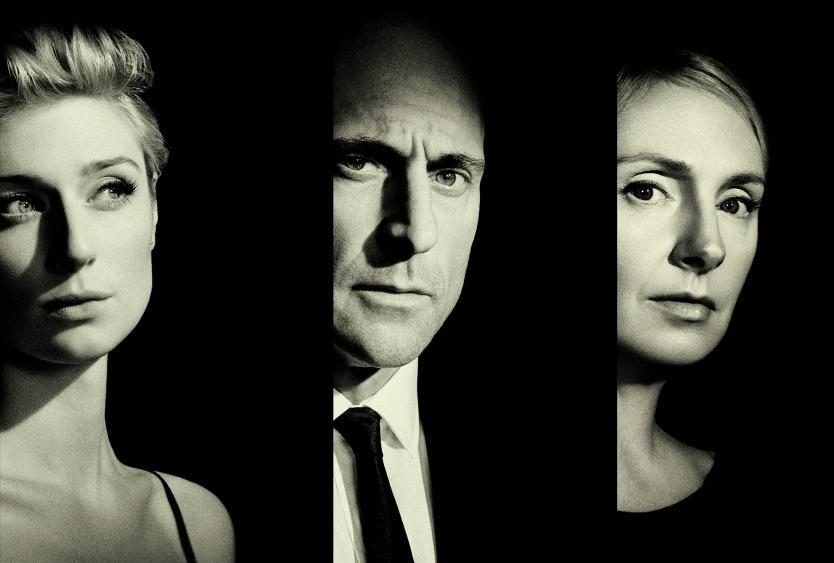 The Red Barn at the National

Big British playwright David Hare offers The Red Barn, a new work which adapts La Main, a novel by prolific Belgian Georges Simenon. Simenon was a guy who wrote thrillers and he wrote a lot of them, and Hare mentions in the programme that his novels generally concerned those at the ‘bottom of society’. For some reason (although we know what it is, buried and insidious: that the NT audience won’t empathise with characters who could never afford the 50 pound tickets they’re paying), instead of deigning to put poor people onstage, the playwright picked a more rarefied source for the drama.

1969. Big-shot lawyer Donald Dodd (Mark Strong) and wife Ingrid (Hope Davis) trudge back to their Connecticut home amid a vicious snowstorm accompanied by their friends Mona (Elizabeth Debicki) and Ray Sanders (Nigel Whitmey). Donald, Ingrid and Mona get home safe, but they’re one short and beyond Donald searching for Ray, there’s not a lot they can do to find their friend. Their other member and their night are therefore gone for a burton. The remaining 100 minutes are a dissection of what occurred that evening and, in bitter revelations, what didn’t.

The Red Barn sits stolidly in the upper-middle-class, mid-life crisis, ennui-ridden, moribund-high-fliers-at-dinner-parties genre. It could be a French New Wave film. Indeed, the book it’s based on was published at the right time, 1968, and it’s director Robert Icke, who’s now a byword for West End sleekness, appears aware of the inherent filmability of it all. I guarantee that his direction (which I’m reductively creditting to him rather than to a complex collaboration) will end up the only enduring part of this production—it’s peremptory but true. Four black partitions enclose parts of the stage and hone in on certain scenes like a jet fighter’s targeting system; this means Icke directs in confines, not colossal space. The Lyttelton, despite being one of London’s caverns, is squeezed into select boxes this way. There’s no physical depth to the environments. It’s insular. Like its characters. And it should be noted that despite my reservations about its use, the effect is spectacular, with a Christmas Day feel to the way each new scene unwraps another area of the stage. Icke with designer Bunny Christie and lighting designer Paule Constable excel in this respect but, and it’s a great but, the upshot’s a touch too cinematic and a touch not dramatic enough to justify its existence. The four partitions work essentially negatively by blocking the space and becoming a camera shot, though not in a voyeuristic Hitchcockian sense because the scene’s in full relief which means it’s flat in cinematic terms.

The production makes for embryonic film. It lacks the tools to serve it’s own style (or at least the way David Hare wrote it). A camera necessarily blocks sections of the view and a novel has the privilege of first-person narration. Theatre just can’t do the focus and expositional dump the story needs without heavy editing.

But is the story actually relevant? Nope. Engaging? It starts very slow, and not enough emotionally or intellectually or anythingly happens until the characters start reflecting on their nothingness. Donald’s hamartia is inaction, but a kind of authentic, man-vs.-the-world’s-expectation style inaction, which is cool, though it’s not developed enough to earn his grand climactic monologue on powerlessness and choice. The script just isn’t too rich in anything. Nothing happens and the non-events don’t amount to events in themselves; it’s not The Trial. The language proffers some half-hearted innuendo, the sort you’d expect in a dinner-party drama and otherwise fails to form texture. The plot unravels as the Huronian Ice Age did, to the point where the ending invites a ‘finally’ rather than ‘oh no’ reaction, and is made worse by the superfluous scenes crowding Donald’s arc. These look born out of lax adherence to the source, like Donald’s meeting with his father. Forced inertia can work, but not here.

Mark Strong’s good; they’re all good, really, but that doesn’t need saying. Debicki looks like she’s doing a duff job in the opening though you soon learn that’s on purpose. Hope Davis in underused, which may be following Donald’s subjectivity who doesn’t really think of her through his downfall, yet it still comes off as harsh.

The set and lightning, on top of the camera effect, are gorgeous and bleak, with late 60’s excess space and bubble chairs. It’s period appropriate, and that’s all it is, apart from the painful camera flashes which connote the documentarian, camera-hole style as talked of earlier.

I would like to say in my haughty writer’s way that there is a better character to focus on than Donald, or a better narrative to latch onto the story yet, while I’d say Ingrid is underused, the people of The Red Barn are so dead that any focus would be a slog.