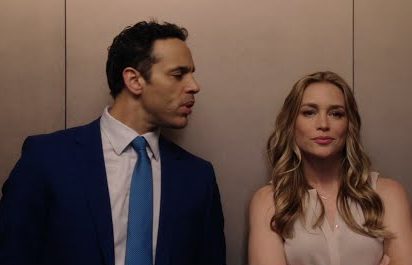 Notorious is a fine show. It’s not good but it’s not offensively bad either. It’s a little bit fun (mostly Kate Jennings Grant as a randy but capable news anchor), a little bit charming (Ryan Guzman might prove worth rooting for), very pretty to look at (Daniel Sunjata and J. August Richards as brothers? I’m in) and, if the strangely fractured premise of half behind-the-scenes cable news drama/half legal soap holds up after the first major plot is wrapped, it might even have staying power. Notorious doesn’t make me angry like some of the fall’s most misguided efforts (Kevin Can Wait, This Is Us), it just fills me with a distinct sort of disappointed sadness.

With Kerry Washington’s pregnancy pushing Scandal to midseason, Notorious is stepping into a very specific space. It’s a non-Rhimes show that needs to fit seamlessly into ShondaLand, ABC’s “TGIT” thursday lineup that starts with Grey’s Anatomy, ends with How to Get Away with Murder, and generally sets the tone for the network’s entire dramatic slate. Pulpy workplace dramas with over-the-top sexualization and unearned girl-power bravado, such is the world ABC has chosen to force almost all of their dramas into and that is very much what Notorious is forcing itself to be.

I’m not an overall Shonda detractor- there were intermittent seasons when I loved Grey’s Anatomy and anyone who tries to say those first two years of Scandal weren’t addictive is lying to themselves but her brand is her brand and it shouldn’t be anyone else’s. In search of Shonda-like popularity and a guaranteed home on ABC, showrunners seem to be flocking to a style that’s built on superficiality and improbable drama rather than building something new from their own point of view, their own signature, their own storytelling priorities.

I didn’t care so much when Joshua Safran Shonda-fied Quantico, and the hints of said style that informed Callie Khouri’s Nashville never managed to overpower that show’s well-constructed characters, but I hate to see this happen to Josh Berman, a personal favourite producer who owns “created by” credit on Notorious but seems to have gotten lost in it.

Berman has credits across genres but I associate him most strongly with Lifetime’s open-hearted second-chance dramedy Drop Dead Diva. The only Berman-created show to date that’s lasted more than one season (it lasted six), Diva was funny, character-centric and more than a little fantastical. It’s telling that all the other failed series trended more towards generic crime dramas, rarely capitalizing on Berman’s quirky humour, and deep-seated empathy. Those are his strengths, the qualities that made Drop Dead Diva special in a sea of sameness. Notorious so far doesn’t lean on Josh Berman’s strengths or even come near them, it’s too busy trying to fit into Shondaland.