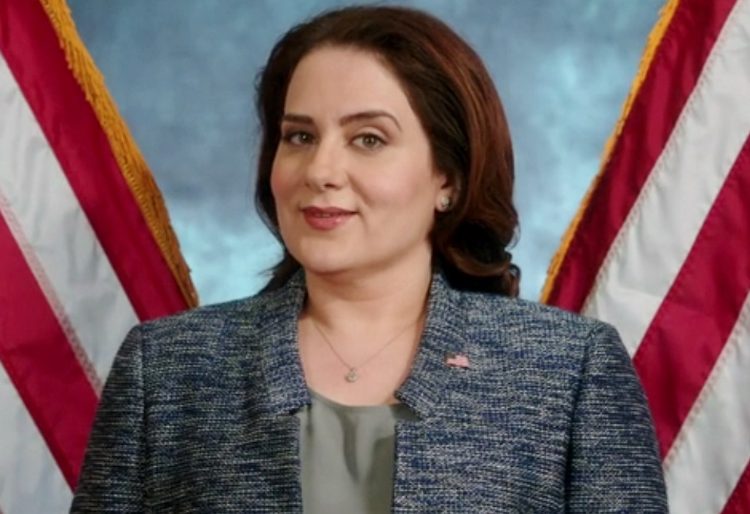 Back in March, the great and wildly underrated Artemis Pebdani won the MyTV Award for Outstanding Guest Actress for her role as refreshingly un-corruptible politician Susan Ross on Scandal. With the dramatic fifth season (and *spoiler alert* Susan’s run for president) wrapped, Artemis took a few moments to answer our burning questions about Scandal, her breakout role on It’s Always Sunny in Philadelphia, and more.

Do you remember the first theatre/tv/film experience that really affected you?
I watched a lot of TV as a young baby child. And it was much more sitcom/Dynasty-based rather than, say, Sesame Street-– which I’m sure in itself left its own special mark on who I am. I think I was maaaybe four when I saw this episode of Three’s Company (which I now know was called “Up in the Air”) where Jack took tranquilizers because he was scared of getting on a small plane. I believe he also drank when he finally got to his resort destination. He ended up doing this amazing dance on the bar, off the bar, with a lamp, with plants, falling, disappearing, reappearing. I thought it was just the best thing I had ever seen. Even though I barely knew what acting was at the time, I definitely was able to recognize “craft” in what was happening. And it was the first time I took note of the fact that something [was] making me laugh even though there were no words or talking.

When did you know you wanted to become a performer?
Some time around the age of 11 or 12 I figured out I was “good” at acting. I mean, who really knows at that age, but I was receiving enough positive feedback to keep me going, and I was just very comfortable on stage– performing and rehearsing. I just loved it all. When I was 16 we were doing Godspell (like every good high school), and we travelled to a theatre festival in Denton, Texas. We pulled into Denton very late at night. I remember our tech rehearsal being at like 2 in the morning or something crazy like that. Everything was a mess around us. People were building sets, other shows were loading in, we were still trying to mark choreography, plus there was the rest of the chaos that accompanies a technical rehearsal. Everybody was completely exhausted, and I just remember feeling fully content and happy. I was totally down for all of it. This is definitely how I wanted to spend the rest of my life.

Your background is in theatre. What have been some of your career highlights on the stage?
I used to be in a performance art collective with a lot of friends called The Discount Cruise to Hell. We played the entertainment on a discount cruise ship on its way to hell. There was a lot of live music- covers and original songs. The scripts usually were about our characters’ stories of how they ended up on the ship–usually. Sometimes it was more abstract and sometimes it was more artistically and literarily based. But it was ALWAYS loud and as balls-to-the-wall as anything I’ve seen or done since. A lot of hand constructed costumes and wigs. More glitter than you’ve ever seen in one place. Our first few performances consisted of just a song or two to pre-recorded music and our goal was to go out and fail as big as we possibly could. I feel that shaped a lot of who I am as a performer today.

Professionally speaking, probably the most “pro” and most fun I’ve had on stage was doing the It’s Always Sunny in Philadelphia touring show of “Nightman Cometh.”  We did the show in a handful of cities on the east and west coast and it was a blast! The audience was of course packed with fans that knew the whole episode and we got to play venues from the Beacon Theatre to The Troubadour and The Palladium, which felt super rock and roll. It was a unparalleled experience!

How did you make the transition into television?
Very slowly. When I came out to LA, I immediately started doing improv and sketch comedy because it was the fastest way to get on stage. TV and film was just what you kept auditioning for in the meantime. Sunny was definitely my first big jump into TV. Then there was still a whole lot of waiting around and auditioning in between seasons.

We first fell in love with you on It’s Always Sunny in Philadelphia. How did the character of “Artemis” come about and are we likely to see her again?
When the Sunny boys first started their show, they shot a couple of episodes on their own and it was called It’s Always Sunny on Television. The guys were playing similar assholes to the ones they currently play, but they were actors instead of bar owners. I was living with Mary Elizabeth Ellis [The Waitress] who was dating Charlie Day. In that particular episode, they sent out a “casting call” for a movie or something, but really they were just looking for hot girls. Rob McElhenney asked me to write a monologue to perform at the “audition”. Any actor will tell you, getting to perform badly is one of the best joys in life. So, super serious actor Artemis Dubois showed up for the casting call, but instead of showing up in a bikini, she performed the crap out of a dramatic monologue—cancer and wigs and bald caps and a surprise suicide twist all in about 2 minutes. Luckily Artemis survived the jump from Hollywood to Philadelphia, and she’s been able to keep her artistic intensity.

The writers are also the stars on Always Sunny, does that lead to a more collaborative environment? What’s it like working with that cast?
As far as the episodes go, they are written way in advance of shooting. There’s really not that much improvising — maybe little bits and lines here and there, but not much as I think people expect. It’s collaborative in the same way as any show. You have a whole bunch of inventive people who are really good at what they do (writers, costumes, sets, props) and they all bring their super powers together to make Sunny happen. By now, getting on set and being with the cast and crew is like being with family. The kind that you don’t see nearly enough and are actually excited to get to see and play with.

What are some of your favourite memories from working on that show?
I remember a couple of times sitting back and watching the cast learn choreography (“Nightman Cometh” and “Frank’s Little Beauties”). Those always struck me as infinitely entertaining and remarkable moments. Also, shooting “Who Pooped the Bed” was so fun to shoot, because the first half of it we were playing fake Sex in the City with the ladies (Dee, The Waitress, and Artemis). It was great to be in an episode where the ladies’ strengths were truly highlighted. We got to see The Waitress be drunk – and Mary Elizabeth Ellis plays one of the best drunks EVER. Kaitlin [Olson, who plays Dee] once again pulled out her physical comedy prowess- I stood there and watched her ram head first into a car door, and oh my crap if that wasn’t one of the funniest, most terrifying things I have ever witnessed.

You won the MyTV Award this year for your work on Scandal. What can you tell us about your experiences working on the show with the all-star cast and most powerful showrunner in network TV?
Yay Scandal! The whole experience has been unreal! This has been such a different game for me, because even though I’ve worked on one-hour dramas before, I’ve never worked on a twisty-turny serial before. So just as an audience watches every week to be shocked at what’s going to happen, I show up to every table read with the same sort of anticipation. It’s always possible that your character is going to make a huge turn or maybe even get shot in the head—who knows? It’s the nature of the beast. I am perpetually in awe of Shonda [Rhimes] and all of the writers’ gift of creating full characters and constant suspenseful drama. It’s just not a muscle I have, and I have no choice but to sit back and enjoy it as a fan.

How do you think being a single mother has influenced Susan’s approach to politics and effectiveness in office?
I think that nearly every move Susan makes is to ensure the world [becomes] a better place for her daughter. That’s truly the guiding [light] of any decision for her, and it seems to me like it’s been working so far.

If you’d had a vote between Mellie or Susan for the presidential nominee, who would you have picked and why?
Well, I guess I’m biased since we’re pretty good friends, but I would totally vote Susan.

This past season we saw Susan start up a relationship with David Rosen. Word on the street is that Josh Malina is the set prankster. Have you been his target yet?
I haven’t been the target of a prank yet. Maybe that’s the measure of being truly initiated into the fold. I’m waiting, Malina! But actually, I’m not. I hate practical jokes and pranks, so please no.

Do you have a dream project you’d love to work on or someone you’d love to work with?
At the moment, I have a project that I’ve written with Mary Elizabeth Ellis, that we originally performed on stage. It’s called Mother May I Dance with Mary Jane’s Fist: A Lifetime Original Play. We just adapted it into a screenplay and are about to go out and try to find the right place to shoot and show it. It’s nuts and broad and intense and getting it fully produced would be a total dream.

I’m also kind of itching to get back on stage in a more traditional sense. I’ve never been an ingénue and I’m finally aging into all the roles that I’ve coveted for so long. So if anyone is looking to cast Lorraine in Lie of the Mind or a Martha or Queen Margaret or Constance or a—you get the idea—call this bitch.

If you could pick one definitive moment in your career up to this point, what would it be?
It’s weird but I think a very definitive moment for me came pretty recently when I had to turn down a job that I really wanted. I mean, I didn’t really have a choice as it was dictated by my schedule. But that was the first time that anything like that has ever happened to me. And though it sucked, it’s nice to be busy and wanted. Let’s hope it lasts!

Do you have any other projects on the horizon?
Yes! I’m also working on a semi-animated show called Son of Zorn. It’s so hard to explain because it’s unlike anything on TV like ever. But it’s so funny and brilliant and it’s going to start airing on Fox this coming fall.

Is there anything you’d like to add?
Holy crap, thanks! It’s an honor [to have won] and I can’t believe I’m listed in any category at all alongside [fellow Outstanding Guest Actress nominee] Brooke Shields!