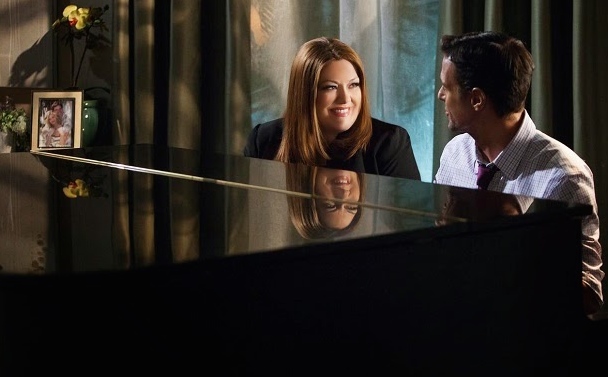 After 6 years and a pretty epic battle to stay on the air, an old sentimental favourite finally left Lifetime’s lineup last night.

Back in season one, Drop Dead Diva captured my heart with its high-concept deliberations on the limitations of beauty- the refreshing image of a size 16 strutting around with the confidence of a model felt like it could do the world some good. My first article about the show attracted the attention of series creator Josh Berman and, ever since, the show has- above all others- been wonderful to us at My TV, participating in exclusive interviews and even inviting us to tour the writer’s room as they closed out season two. It hasn’t always been perfect, or even close to it- the procedural elements grew occasionally tiresome, a few of the arcs strained honesty- but Drop Dead Diva was always a special show for me and I’m very sad to let it go.

The mark of a somewhat overdue goodbye is a final few seasons that don’t match the first few in quality, and that was certainly the case here, but at least Diva left us on a note that defined what the whole thing had always been about- a love story.

Mind you, I didn’t know it was always a love story. I thought it was a story of one woman learning to love herself, with a few detours for bittersweet love triangles and tales of best friendship. A part of me will always prefer that version, the bushy-tailed but always moving dramedy that saw the spirit of aspiring model Deb learn to embrace the body of Jane with all the thrilling intelligence, doughnut cravings, and unromantic realities that came with it. That version played down the show’s complicated mythology unless it was thematically helpful (mostly as it pertained to Fred, what a great character!) and focused more on the emotional journey of a woman who feels beautiful when the rest of the world refuses to see it. It also explored the reverse side of the story as Jane’s newfound intelligence and serious job threw her best friend Stacy’s life as a model into the harsh light of vapidity. But, at some point, those characters had to reach the end of their journey to self-acceptance. But no one (a few actors aside) wanted to say goodbye to the show. What then?

Then came the pot-stirring. The constant threats of “revealing Jane’s secret”, the actual revealing of Jane’s secret, the bizarre fiancé-swapping (Really? Was it necessary to keep Owen on the show after Jane broke his heart? He wore out his welcome very quickly and Definitely never made sense paired with Stacy), the awkward casting shifts when actors inevitably wanted to move on (Ben Feldman’s goodbye was perfect- and his cameo in the final season the perfect callback- but Josh Stamberg’s Parker was written off with zero grace and 100% too much Brandy). The last few seasons of Drop Dead Diva were filled with shenanigans that had nothing to do with the thematic sophistication of its earlier incarnation. But when you think about it, the thematic sophistication only had a season or two of runway- the show had to go somewhere, shenaniganville was somehow inevitable.

The addition of Justin Deeley as new guardian angel Paul helped. He didn’t really contribute much to the actual stories (or Jane’s life, for that matter) but he highlighted the final season’s best episode “Identity Crisis” and proved just fantastically charming enough to balance out the full-blown obnoxiousness Margaret Cho seemed to have been building up to gradually in her work as Teri. But even in the questionable later seasons, you could always count on Diva for some strong and strange court cases and a great guest star or two (Rick Springfield as an ailing rocker being kicked out of his own band? Hells yes).

The final run of episodes made a truly bold move- they killed off their leading man. Brazen, thematically appropriate, and I never saw it coming- bravo. Save a few brief flashbacks and hallucinations, the pretty face of Jackson Hurst was fully absent from the final 3 episodes of the series. Grayson was instead played by the differently handsome Jeffrey Pierce (doing a fair Jackson Hurst impression) after Fred let him press the “return” key. By this point all character-expanding love Grayson had managed to build up (realistically or not) for Jane had been well simplified by his finding out that she’s really Deb (and somehow not getting any mental health professionals involved) so all it really took to line the lovers up for their happy ending was him getting in touch with Jane, her getting him off of death row (because she’s Jane, she does in a matter of hours what “Ian Holt”‘s attorneys couldn’t do through multiple appeals over many years), and them adamantly ignoring the pleas of “He’s a con artist! You can’t just run off with a man you don’t know! You need to grieve for Grayson!” from the sensible, if annoying, friends (well, Kim and Owen- not really Jane’s friends) who weren’t in on the “everyone is someone they’re not” silliness. For one of the most complicated final plots of any series I can think of, the whole thing was remarkably neat and easy. Stacy gave birth to her twins with Owen (whom apparently she loves?) by her side, Kim found a nice guy who undermines her pretensions, Teri left to go be a musician (yeah, okay), Paul… um… I don’t know what became of Paul, and Grayson as Ian discovered his equivalent of Deb inheriting Jane’s IQ- he can sing and play the piano (though he also gets to be super handsome still, which seems kind of unfair). It’s all tied up in a pretty, but strange, bow.

As Jane stood beside Ian at the piano (bizarrely not singing along- did somebody forget that Brooke Elliott is the star of this show?!), his rendition of “It Had to Be You” (the When Harry Met Sally theme song, btw) became the backdrop to a montage of Deb, Grayson, Jane and Ian’s journey over the course of the series. One of the may reasons I hate it when fans decry a series finale as somehow unfitting (here’s looking at you, Lost) is that you don’t really know what a show is until it’s over. The finale of Breaking Bad made it clear that it was Walt’s story all along, not the Jesse/Walt duet I’d hoped it was; the ending of How I Met Your Mother put the whole series into an entirely different context (somewhat annoyingly, but still); The Sopranos‘ closer forced us to go cold turkey because Tony’s story had always been bad for us; Seinfeld reminded us that this was always a story about terrible people; The OC refocused on its founding themes of family and belonging; Lost had always been more about faith than numbers. It turns out, Drop Dead Diva was a love story. It may have been created as a story about feeling comfortable in your own skin (or maybe it wasn’t, but I’ll always believe that it was) but ultimately it was about two people whose love transcends life itself. I know that now.