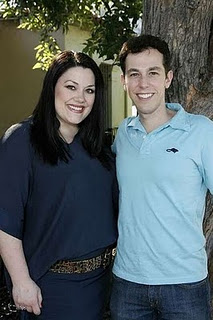 The My TV Nominee series is back, this time for a conversation with the man behind the 4x My TV Award nominated series Drop Dead Diva. Read on to find out what the charismatic writer has to say about the best comedy series/best new show nominee, getting the series off the ground, life in the writers’ room and his 2x nominated leading lady, Brooke Elliott. The sweet and delightfully generous Josh also drops an exclusive tidbit of news about a big guest star in the season premiere, officially announced here before anywhere else.

Take it away, Josh…

Can you describe the process of writing a typical episode?
Generally the other executive producer and I brainstorm an emotional arena for Jane to deal with then look for a legal case that will represent that well. We then take it to the writers room and weeks, sometimes months later we’ll have the story fully broken.

Wasn’t Drop Dead Diva originally conceived for FOX?
It was actually bought by FOX but before I had even finished writing it the writers went on strike. During the strike FOX dropped all their development so it became what’s called a “freeball” script. So we took it to Lifetime and they fell in love with it immediately so it was a no-brainer for them. They’ve been really supportive ever since.

Where did the idea for Drop Dead Diva come from?
It actually came from a low concept idea. It came from my grandmother, who’s name was actually Deb. She was a Holocaust survivor. She was overweight and only 4’11’’ but she acted like a supermodel after what she went through. So I just started thinking about how to represent my grandmother. So I thought of someone who looks like Jane but carries herself like Deb.

How involved are you in the day to day production of the series?
I work in LA and the show is produced in Georgia but I travel back and forth a lot. I’m actually heading there this week. So I’d say I’m very involved.

Perhaps my favourite thing about Drop Dead Diva is how you treat all your characters equally, holding them to the same standards as human beings with no special treatment or prejudice based on physical appearance or intellect. Is that something that’s important to you?
Absolutely. Stacey is just as insecure about her persona as Jane is, it just comes from a different place. In my experience, no one is without insecurity, so we try to represent that.

Fred was an early favourite among my writing staff, is there any chance we’ll be seeing him again in season 2? What was the reason for his sudden disappearance from season 1?
He’s a series regular now, he’ll be in every episode from now on. Viewers adore him and we love writing him. The only reason he left the show was that he had a deal to be in an ABC show. When it fell through I was on the phone with him right away, arranging for him to come back.

We at My TV were also really big fans of Jane’s boyfriend Tony. Will he be returning for season 2?
He’s definitely coming back. That relationship becomes crucial for Jane really early on in the season.

Is the man at the end of season 1 really Jane’s husband? Was that a twist you had planned all along or did it come to you mid-season?
Jane has a lot of secrets from Deb, and we’re constantly mining them. We always knew there’d be people from Jane’s life coming back, her husband just seemed like a natural choice. It’s definitely her real husband.

The finale also brought lots of ambiguity to Jane’s career. How will her decision to report the evidence last season affect her career?
We start the season with her having left her law firm. I don’t want to give anything away. There’s a big twist that you won’t see coming.

Season 1 featured a ton of great guest stars, is there anyone interesting signed on for season 2 already and are any old favourites returning?
There are lots of great things coming, we haven’t announced them yet. I can announce here for the first time that Paula Abdul will be in the season opener.

What are some things you think audiences would be surprised to learn about your cast?
How close they are. On a lot of shows actors are cordial but just do their own thing, but on Drop Dead Diva they really are close. Some of them live together. They’re all happy to be at work. I’ve never worked on a show before where actors will call me directly with ideas for their characters and the show. They are all very supportive.

If you could hire any anyone to come appear on your show who would it be?
Bette Midler or Cher.

Do you ever have time to watch TV? If so, what are your favourite shows of all time?
A lot in the legal genre: ‘The Practice’, ‘Boston Legal’. I really liked ‘Six Feet Under’, when it was on. And ‘The Office’ is still funniest thing on TV.

Do you have any advice for an aspiring showrunner?
Learn all you can, work 7 days a week and learn everything you can about production.

Is there anything you’d like to add?
This show is on Lifetime and doesn’t always get very much attention. I’m just so grateful to sites like this that are really supportive of our show.

Winners of the 2009 My TV Awards will be announced and notified in March. Drop Dead Diva is nominated for Best New Show, Best Comedy, Best Actress in a Comedy (Brooke Elliott) and The Be-My-Best-Friend Award (Brooke Elliott).

The new season of Drop Dead Diva premieres in June on Lifetime.