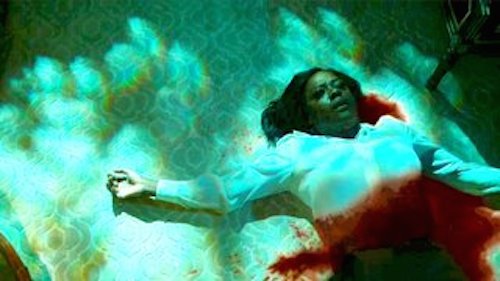 Getting Away with Another Murder

I hate to be the Debbie Downer of all things Shondland but I really was looking forward to the premiere of How to Get Away with Murder. Viola Davis was hot off her new Emmy win and I couldn’t wait to see what season 2 had in store for Annalise and the Keating 5. Alas, I was severely disappointed with the premiere.

First, we were given an answer to the question of who killed Rebecca? Last we saw her, Rebecca was tied up by Annalise and the 4 of the Keating 5. Wes had killed Sam and Rebecca was apparently innocent but Frank and Annalise found her dead in the basement. They lie to the others and pretend Rebecca escaped. We already knew Frank killed Sam so he was easily safe from having also offed Rebecca. The premiere episode largely focuses on the assumption that Wes is to blame. Frank starts tracking his moves but then begins to watch the other three students when Annalise professes her belief that Wes is innocent. In the end, we find out Bonnie is the culprit. I find this not very shocking and a little dull. So now both of Annalise’s minions are killers and she is left to pick up their pieces.

It seems like the first of our season long mysteries revolves around some new characters. We have a set of adopted siblings whose rich, white parents have died. Their aunt is the key witness in their trial and believes both siblings killed their parents. Annalise ends up trying to get the case and by the end of the episode we learn that the aunt has been killed. This all leads to our new “flash forward” of the season where Wes is seen running from the sibling’s mansion, a gun is fired, and Annalise is found shot on the floor (but still alive, for now).

We’re also introduced to Eve Rothlow (Famke Janssen, a favorite of mine!). Last season, Annalise framed her boyfriend Nate for the death of Sam but then gave him a phone number to call for help. Turns out that number belonged to Eve. Eve quickly catches on that Annalise had something to do with Nate’s incarceration and finds out that she’s protecting whoever killed Sam. She’s ok with it though because apparently she and Annalise used to be lovers and Annalise left her for Sam. So Eve ultimately trusts Annalise and knows that if she’s protecting someone, he must be morally innocent. I always find the surprise lesbian stories to be a bit odd. I get that sexuality is fluid and it’s perfectly reasonable that Annalise could have dated a woman. I just feel like it’s a random plot development which often comes out of left field given our prior understanding of the character. In this case I won’t really complain because I love Famke Janssen and if being romantically connected with Annalise means more airtime for her, then I say bring it on.

Not much is happening with the Keating 5. Asher is dating Bonnie but is secretly working for the prosecuting attorney in Nate’s case. Wes is trying to be all dark and badass by talking back to Annalise during class, but in reality he’s just sad over his girlfriend’s death. Connor is dealing with a dry spell in the sex department since Oliver found out he’s HIV positive. Laurel is being a bit bullied by Michaela after she hid her engagement ring to scare Micaela into keeping Sam’s death a secret. Michaela is trying to figure out what “eggs 911” means and texts the number back. But she’s too busy to see the response because all four are at a night club with Annalise dancing? I can only hope the impromptu dance club trip was Annalise’s way of creating some sort of alibi for her students…at least I hope so because her weird parental/sexual relationship with Wes is getting confusing. My first instinct was that perhaps Annalise had the aunt of the siblings killed and she’s taking her closes student’s out so nobody suspects them off offing the key witness for the prosecution. But then we get a scene where the daughter is painting a creepy picture of her aunt, so I’m probably wrong.

I’m less excited for the remaining season but hopeful that the show finds its groove again. At the very least, we can all enjoy the amazing acting talents of Viola Davis.