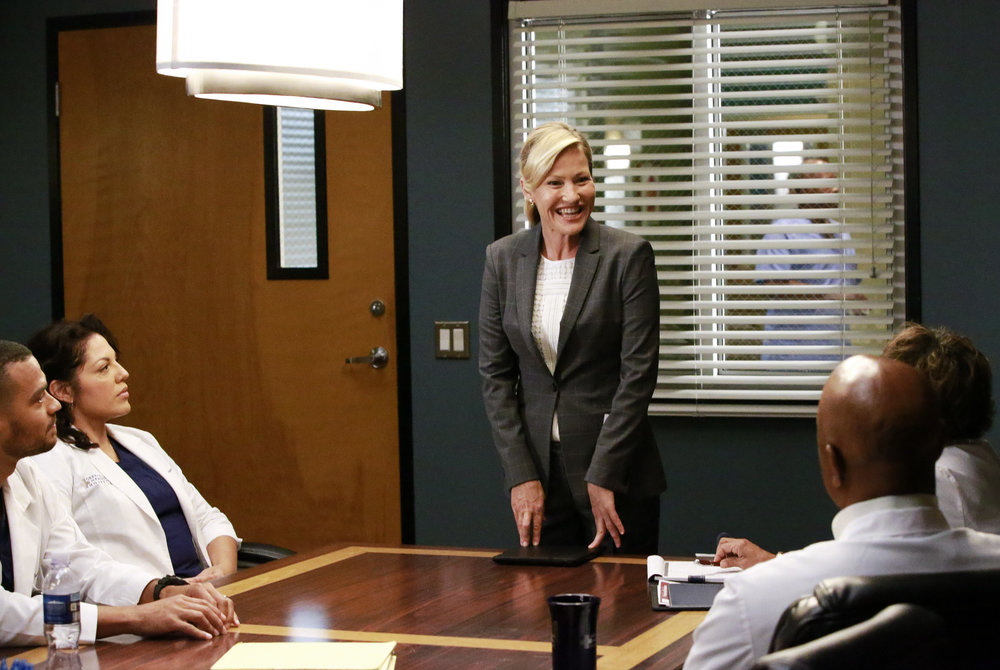 Meredith’s voiceover brings us right into season twelve of Grey’s Anatomy. She sets us up for a new McDreamy-less life by saying, “I’ve been here before, this is old hat…but everything has changed.” As the episodes progresses, I’m realizing that really nothing actually has changed.

Right away, we see the same tension between Meredith and her sister-in-law Amelia. Meredith is back in her old apartment and back living with two colleagues (this time both members of her extended family: Amelia and half-sister Maggie). Maggie is stuck in between the two as they bicker and complain to Maggie about the other. This feels all too familiar. When we ended season 11, Amelia was the emotional one who couldn’t get past her brother’s death or Meredith’s decision to pull the plug. It seemed as though they had resolved that issue, but alas tension again.

Meanwhile, Bailey continues her campaign for chief. In a not-so-shocking storyline, Catherine Avery feels Bailey isn’t the one for the job and brings in her own candidate: Dr. Tracy McConnell (played by Joey Lauren Adams). Dr. McConnell worries Bailey as she’s clearly a good fit for the position. She even steps in to offer Meredith some surgery advice and helps to save a patient. In the end though, Bailey decides to give her spiel about her love for the hospital during her own surgery and wins the coveted spot as new chief. I love me some Shonda, but her complete biased love toward Bailey drives me a bit insane. I feel like Bailey can do no wrong in Shonda’s eyes and personally, I would have preferred seeing Dr. McConnell get the job and bring some new life into the series.

Our next subplot focuses on April’s impending return to Seattle after leaving Avery to work overseas. Avery is still mad. April is clearly still impacted by the loss of her child. She returns, he broods, and we all wonder why this is a couple we still care about. Same old, same old.

Not much happens with our other doctors. Arizona has a throwaway plot where she’s trying to find a roommate but nobody wants in. Apparently she’s notorious now among the interns and everyone’s afraid of her (first Bailey, then Meredith was “the mean” one for a while, and suddenly now Arizona is the feared doctor? I don’t buy it). Andrew (the new intern who mistakenly let everyone believe he was a doctor in the finale) decides to move in with Arizona. He too has no friends since all of his intern pals are mad about the whole “fake doctor” thing. They apparently agree to move in together.

For all the boringness that was the premiere, we at least got a somewhat interesting medical-case-of-the-week. Two girls arrive at the hospital after being hit by a train. Come to find out they are secret girlfriends and hurled themselves in front of the train because they wanted to be together either dead or alive. We get to see the different reactions from their parents (one who wishes he knew his daughter better, and one who wants to send her daughter away to camp to turn straight). The episode was essentially about bullying and culminates in Maggie punching the evil mom in the face (even though all signs would have pointed to Callie being the one who flips out). It was a fine plot but not new territory for the series which loves a good family drama focused on social issues.

I gave up on Grey’s once before and it’s starting to feel like it could happen again. If there’s one thing the exit of Patrick Demspey means, it’s that they can afford new actors and thus we get new characters to meet. I’m hoping some of the new interns become great additions like so many of this cast (Owen, Callie, Arizona, Maggie) but I’m not sure if Grey’s can recover after 11 (somewhat) solid seasons.