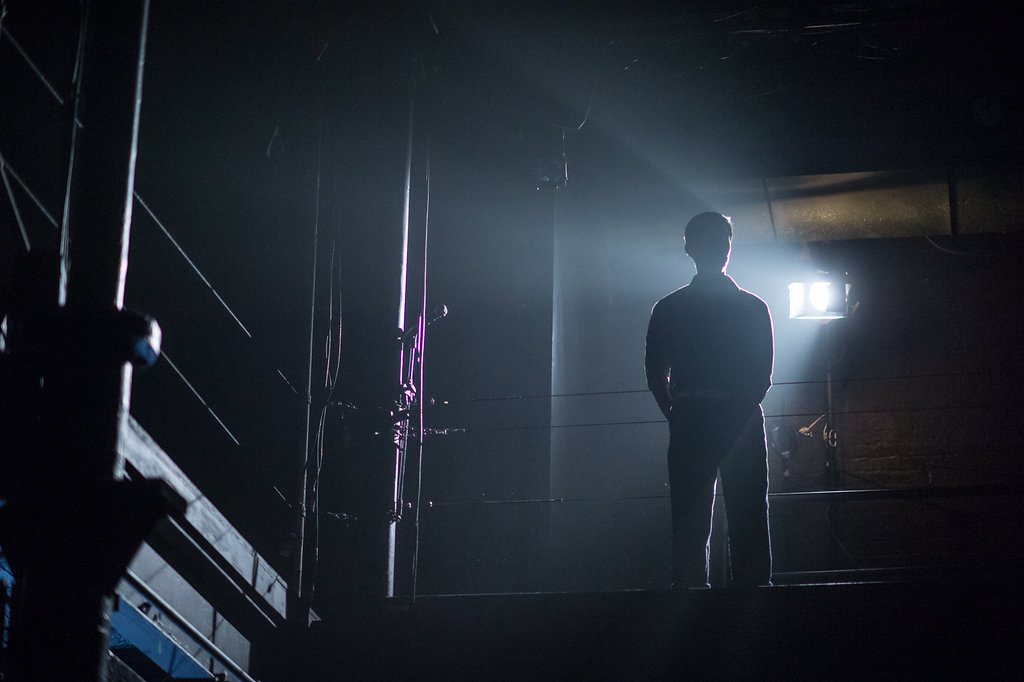 This new adaptation by Matthew Thomas Walker (who also directs) of Aldous Huxley’s dystopian masterpiece written 84 years in the past and set 524 years in the future is big and bold for a company only on its third project. The script is a little bloated, full of draggy exposition that could certainly be shown rather than reported, but the production itself is a stunner.

Walker and minimalist set designer Patrick Lavender open up the TPM Mainspace and use every inch of real estate available to turn a fringe theatre into a sprawling dystopia without adding much at all. The usual upstage curtain is gone and the utilitarian staircases it hides become a part of a factory, a lighthouse and more. The audience has been re-arranged at an angle that turns the deadspace between the stage and the steps to the upstairs bar into a “savage” world where disaffected community member Bernard finds the outsiders, John and Linda, he’ll bring home to disrupt the miserable peace of his caste-dependent world. Even the catwalks are in use, creating an almost-immersive experience within a traditional seated theatre environment. Lavender’s inspired lighting does wonders in defining the play’s world and tone while Nick Storring’s soundscape adds the foreboding underbelly to a seemingly all’s-well atmosphere.

The cast is an excellent one, highlighted by Eli Ham as tragic wanderer John, perfectly blending aggression and vulnerability to capture the famed character’s conflicted spirit. The position of all-powerful leader Mustapha is refreshingly reshaped as a woman of colour in the form of the spookily calm Nehassaiu Dagannes and Zoë Sweet brings intriguing thoughtfulness to Lenina, the somewhat under-developed leading female role. Jesse Dwyre plays an intelligent and understated Bernard, an antihero caught between his Alpha Plus status and a crippling inferiority complex, though the adaptation oddly seems to lean away from the character’s darker attributes. Sophia Fabiilli is the lone cast member who doesn’t seem to quite fit, approaching both her roles (Fanny and Linda) with a heightened, almost satirical, style that seems at odds with the naturalism of the rest of the cast.

Brave New World is deceptive in its simplicity. The scope of Huxley’s world-building seems daunting but his story is ultimately surprisingly focused. Walker captures that quality perfectly with a character-dominated production that steers clear of bells and whistles but his text needs to embrace the same philosophy, clearing out the filler so the audience can see clearly to the centre of things.