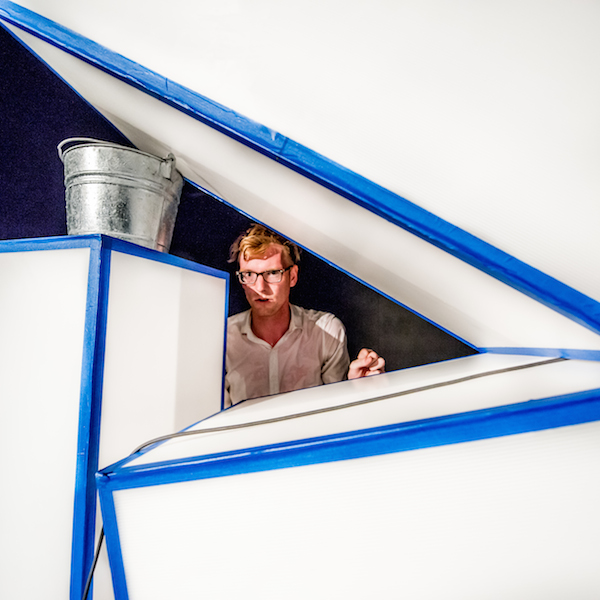 Depression is our generation’s plague. AIDS, tuberculosis, the actual (as in bubonic) plague, they’ve all cut down generations before us, but clinical depression, that’s what is attacking the great minds of right now. Millions at a time, it’s taking our thinkers, our emoters, our connecters, our seers; depression’s reach is monstrous and widespread but there’s something about our artists, the plague always finds them. Bold, inventive, insightful playwright Thomas McKechnie is one such artist, diagnosed at the age of 18 with depression that has followed him ever since and likely always will. 4½ (ig)noble truths is his honest, poetic expression of what that means.

The hour-long solo show is structured as a lecture, a presentation (with slides!) about the causes and effects of, and possible aids in dealing with, clinical depression. And, no, no matter how much you’ve read about the subject, you don’t already know everything- or anything, really- that McKechnie has to say.

Director Michael Reinhart accomplishes the rare feat of infusing grand metaphorical visuals and engaging action into a solo production. A glimpse into McKechnie’s mind during a routine social interaction is recreated using eggs that McKechnie frenetically arranges and rearranges on a table, the fragility of the situation and stressful chaos of keeping the eggs from breaking creating the perfect accompaniment to the stream of consciousness/spoken word-like storytelling style. The seeming carelessness of how McKechnie proceeds to break all but one of the eggs is a startling, effective contrast. The lone remaining egg is the one that’s been representing himself. Its strength is then tested as McKechnie piles all his props and elements of scenographer Claire Hill’s set on top of this small, symbolic, vulnerable thing. Its resilience is shocking, as is the pitch-perfection of Reinhart’s innovation here, physicalizing McKechnie’s text without literalizing or detracting.

McKechnie is not an actor; he’s a writer first and you can tell. Impeccable precision (and perfect annunciation) is required to deliver the tripping speeches in his bone-shattering script, performance precision he does not have. It’s nevertheless important that Thomas McKechnie play the role of Thomas McKechnie, messy though the result may be. It’s his story to tell and the emotional impact of the script’s brutal exposure might be diminished if we were one more degree removed from its source. More importantly, the audience needs to see in person someone depression is threatening to take away from us. This, both written and performed by Thomas McKechnie, is not a theatrical approximation of an artist’s depression, it’s a depressed artist making art in the hope that it might help us understand and help him, somehow. It feels reductive to use the over-used word “brave” but if this isn’t that then I don’t know what is. 4½ (ig)noble truths is moving, intelligent, funny, helpful and goddamn brave; you need to see it.