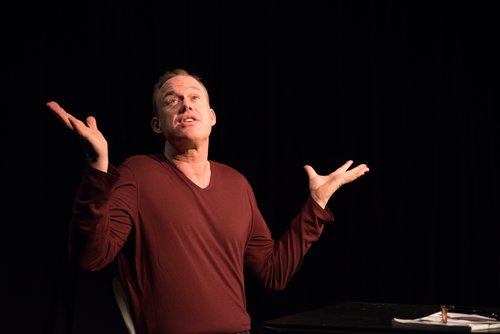 A Minor Mid-career Retrospective (A)
James Judd performs his stories from a collection from the last 10 years of his career. It is advertised that each night is a different pick of stories and after seeing this show I’m tempted to see them all. From the very minute Judd arrived on stage, we were charmed. He has a perfect balance of eloquence, wit and humour. The stage is mostly bare, but Judd has enough presence to command the whole space. His characterisations are all clear and nuanced, his energy is spot on never leaning into over-bearing. Do yourselves a favour and go see this man in action. It is quite something.

Doomed (B)
Jorge Moreira has Attention Deficit Disorder. Jorge grew up in a Porglish-Speaking household. Jorge is single. Jorge has a sense of humour about it all. In Doomed, Moreira switches between directly addressing the audience, sharing anecdotal highlights from his ADD-tinted life and fantastical responses to the true events. This switching actually highlights nicely the inner workings of an ADHD mind. Jorge is truthful, funny and endearing and he is most at ease when he talks directly to us. The surreal scenes are often very funny but a little sloppy in pace and stage craft, which lets the show down. The material of the show has such potential and with some tightening and maybe even a move away from the reliance on props and costumes this could be a really successful and tour-able one man show.

The Art of Being Alone (B-)
Stephane is having a passionate love affair with Keira Knightley. Oh wait, that’s just a vivid fantasy. The brutal reality is that he’s just come out of an unreciprocated love and feeling broken, sad and…alone. Fittingly this is a one man show and Stephane Garneau-Monten is certainly talented & entertaining.  He instantly gets the audience on-side with his quick unsuspecting gags, cultural references and total charm. We’ve all been that miserable, whisky-swilling sap post-break up. The laughs are eruptive early on in the piece and weaken as the story progresses. Stephane tries his hand at leaving the house and even approaching another female. Well, that was quick. There are many asides between Stephane and Stephane and Stephane and he slowly negotiates which voice is the best one to keep around for getting him out of his slump. The premise and characters are set up beautifully in this show so it’s saddens me that it lost me somewhere along the way. We don’t delve properly into any real truth nor do we stay in the ridiculous comedic elements. A stronger dramaturgical hand would help this promising show. Still fun.

Oh, Sarah! (C)
Based on the life and memoirs of famous actress, Sarah Bernhardt, Oh, Sarah! is a retrospective of her life during the lead up to her death. Bernhardt was such a prolific actress of her time and Edith Acker relishes the role. As a performer myself, I hang on the words of older actors when they decide to pull out a tale from their early days. That is the only thing that kept my boredom at bay in this show and I’m sad to say if you’re not in the business, you may not be entertained. Acker spends most of the play behind a desk writing and speaking slowly, sometimes for very lengthy periods of time, so the potential of the text isn’t fully realise. The play really comes to life when Acker is up on her feet but unfortunately these moments are short-lived. There are some clunky sound cues and the play ends unceremoniously. The story is a gem, this production is not.

La Cucina (C)
Returning from Canada, Elia visits his newly acquired family home in Italy. It is rundown and neglected, like the memories that echo within the walls waiting to erupt. We flashback to the past and view the events that occurred and the heartache that still exists in the current day. The reveal of the plot points isn’t fully realised and falls a little flat, not carrying the dramatic tension needed for an audience to feel fully satisfied but I admired their efforts all the same. There is a bit of excessive stage business but mostly the play moves along swiftly. The accent work and vocal clarity has space for improvement and a little story was lost due to this. The cast all bring a lot of heart to the roles, except the nazi officer who directly addresses us with strength and presence. John Bressan, who plays Bruno also wrote La Cucina. An admirable effort on both parts. Marisa bressan, John’s real life wife is also in the play and “would like to beg the audience’s indulgence as she strives to remember her lines.” A real family affair for this production.