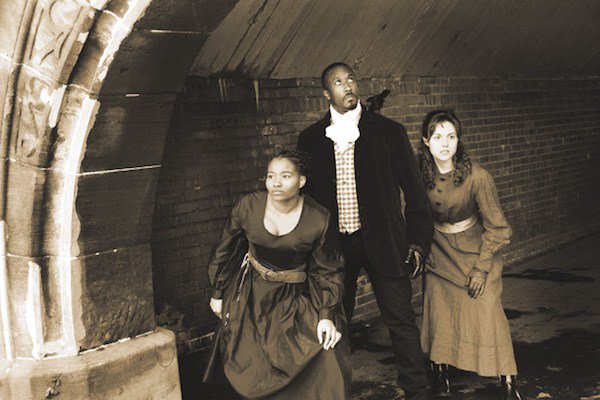 It is February in New York again, which means it is time for the annual Frigid Festival in the Lower East Side, celebrating its tenth year in existence. The festival boasts a diverse line-up of off off-Broadway theatrical productions, and this year is no exception.

Emily Dickinson: Paranormal Investigator
The greatest flaw in Todd Brian Backus’ play Emily Dickinson: Paranormal Investigator is not that the premise is bizarre. It is, to be sure. However, we live in a time when a sizable portion of the country tunes in every Sunday to watch a group of weary men and women develop basic survival skills while avoiding flesh-eating zombies. So, bizarre fits right into cultural demand. No, the greatest flaw of Emily Dickinson: Paranormal Investigator is that it borrows heavily from well-known visual and literary work to craft a vaguely spooky period piece that seesaws back and forth between a well-structured ode to gothic-lore and a convoluted drama. That is not to say that there are not kernels of real promise in this play – there absolutely are.

Presumably set in the early to mid 1800s, Emily Dickinson is told from the perspective of Ms. Dickinson’s good friend (and potential love interest) Helen Hunt Jackson who has recorded Emily’s adventures as a paranormal investigator. She is the Watson to her Holmes, so much so that she even comments on one of Emily’s studies that is curiously similar to Sherlock Holmes’ study on tobacco ash. Emily accepts an invitation to investigate some witch-related activity and is reunited with her former mentor, Edgar Allen Poe, who is also investigating the matter. Poe and Dickinson share a “gift” that both cultivates creative thinking and plagues them with dark thoughts. Their work takes them to New York where their exploration of symbology and spiritualism culminates in a fight for their lives.

Emily Dickinson suffers from its playwright’s efforts to do too much in a short time frame. Relying upon the audience’s underlying knowledge of 19th century literature and elements of spiritualism, including the rise of the Fox Sisters who claimed to engage in spiritual rapping or conversing with the dead, the play crams so many allusions and complications into such a short time span that many of the elements are not given the proper care and attention to develop organically. The intriguing main plot explores the creative “gift” shared by both Poe and Dickinson, which conveys creative genius on those who have it and simultaneously drives them a bit mad. Natural talent is a gift desired by many, and the play explores the lengths that some people might go to in order to acquire it (assuming that such a thing is possible). However, this central plot suffers from a sub-plot that focuses on Dickinson’s handling of witch possessions, magical Kitsune, and other spooky specters – a sub-plot that infuses action into the play but ultimately feels like an underdeveloped distraction. The entire paranormal-laden trap set for the main characters seems overly complex given the end goal of the play’s villain. Moreover, the play suggests that Poe and Dickinson have a fractured relationship while also indicating that Helen and Emily may share a bond that goes beyond friendship; however, neither of these relationships are well explored or explained – the playwright opts instead to focus on the mythical and mythological elements of the play. Unfortunately, while much of the plot takes itself quite seriously, the end jeopardizes the integrity of the play by introducing an unlikely and cartoonish villain that actually uses the monologuing line from The Incredibles.*

Acting highlights include Marina Shay who enthusiastically embraces the absurdity of the situations that her character is placed in, engaging in convincing combat and injecting some much-need humor into her performance. Briana Sakamoto’s role as all of the Fox Sisters is one that could slip into shtick, but Sakamoto crafts distinct and interesting personalities for each of her characters – plus she demonstrates some pretty wicked rapping skills. Joining the cast as brooding alcoholic Edgar Allan Poe, Daniel Morgan Shelley brings an authentic gravitas to the role but also introduces welcome levity at key moments.

While Emily Dickinson: Paranormal Investigator suffers from its playwright’s fervent pen (and the occasional line of dialogue borrowed from popular culture and literature), Backus has crafted an intriguing tale delicately woven together with gothic literary allusions and historic elements that, with some thoughtful editing, has great potential.

*Note to playwrights – there is a fine line between paying homage and plagiarizing. Walk that line with great care.

The Extraordinary Fall of the Four-Legged Woman
One of the classic representations of “otherness” is the Freak Show. From the 1932 classic Freaks featuring Daisy and Violet Hilton to the 1997 musical Side Show about the Hilton sisters and Ryan Murphy’s 2014 television hit American Horror Story: Freak Show – freak shows are often used as the setting to examine human struggles with isolation and ostracization, and the desire to be accepted despite one’s flaws. Lily Ali-Oshatz’ musical The Extraordinary Fall of the Four-Legged Women is no exception, and therein lies the problem – it fails to distinguish itself from its many predecessors.

Extraordinary Fall features a cast of “freaks” – Myrtle Corbin, a four-legged woman,* a sword-eater named Lola, and Simon-Elizabeth who goes by a gender fluid name and prefers pronouns like “their” as opposed to “he” or “she”. The final “freak,” a man named Oswald, has an ambiguous ability that distinguishes him from others – something to do with singing and engaging in fancy footwork that is reminiscent of William Barfee’s dance moves in 25th Annual Putnam County Spelling Bee. This troupe of misfits is led by a morally questionable ringmaster, M, who either cares deeply about her troop and protecting them from the harsh attitudes of the outside world or simply wants to keep her show profitable by protecting her commodities (i.e., keeping her entertainers). Myrtle catches the eye of a wealthy and well-dressed doctor, Clinton Bicknell, in the audience one night who begins to court her. He comes back repeatedly to see the other performers as well and eventually asks Myrtle to marry him. Myrtle declines after the ringleader convinces her that the outside world can never truly accept her – that the members of the show are the only ones who can possible identify with her. However, her friends convince her otherwise, telling her to pursue the man she loves and live the life that she longs for.

The simple premise of Extraordinary Fall carries emotional weight but adds little to distinguish the plot of this musical from that of any similar dramatized story set at a freak show. The show also fails to widen the scope of the discussion around “otherness.” In addition to the pitfalls in the book, the musical elements of Extraordinary Fall are presented a capella, complete with a pitch pipe before each song, which feels like a gimmick – and, at times, a poorly executed one at that with consistent pitch problems amongst the cast.** While none of the songs are particularly memorable, there are moments of beauty within them. Madeline Bugeau-Heartt is a particularly strong vocalist whose sonorous solos are quite striking.

Extraordinary Fall works hard to make its characters and plot seem exceptional but, ultimately, it suffers from being exceptionally ordinary in an entertainment industry that has visited the same plot time and again.

*The characters of Myrtle Corbin and her husband Clinton Bicknell are based upon real people.

**To their credit, it is difficult to sing an entire show a capella with only a handful of singers.

So Amazing
Walking through Boston one evening on my way to law school, I was suddenly approached by two young women who complimented me on my wardrobe and asked me if I attended church. As a committed Humanist who was late for class, I tried to push past them with a casual “I’m an academic.” One of the girls held up her hand to stop me and replied, “me too! Have you ever heard of God the Mother?” Perturbed, I shoulder-charged my way through the pair with the sternest glare that I could muster. That night had faded completely from my memory until this past weekend when actor and playwright Diana Brown told a very similar story in her autobiographical play So Amazing. The only difference is that she was courteous enough to listen to their pitch. That decision would lead her to the World Mission Society Church of God – a religious institution that has been labeled by many, including Ms. Brown, as a cult.

Ms. Brown has done an admirable job of crafting a short play that distills her experiences at the church, discusses the psychological pressure they placed upon her and how that pressure transformed her way of thinking, and recounts the deprogramming process that allowed her to cut ties with the organization. The play comes across as deeply personal and, unsurprisingly, quite serious; however, Ms. Brown’s impersonations of her friends, family, and church acquaintances add a welcome element of humor to the plot and serve to highlight the absurdity in many of the interactions that she had with the people in her life during her time at World Mission Society Church of God.

Despite a strong premise and a convincingly passionate lead actress, So Amazing suffers from a self-identity crisis. Although billed as a play, So Amazing sometimes feels like an advisory piece for potential, current and former cult members. Interspersing re-enactment sequences with monologues that tear the fourth wall to shreds and using PowerPoint slides as a teaching mechanism, Ms. Brown’s play occasionally transforms from a staged drama into a collegiate lecture, and the piece could benefit from additional creative direction that would help it grow as an artistic work. Moreover, the narrative would benefit from being more fleshed out. The building blocks of Ms. Brown’s experiences are in place to forge a compelling tale, but the plot moves along in fits and starts, which makes So Amazing a promising but underdeveloped account of one woman’s harrowing journey into the world of a sinister religious sect and the people who helped release her from its clutches.

The Frigid Festival runs through March 6.