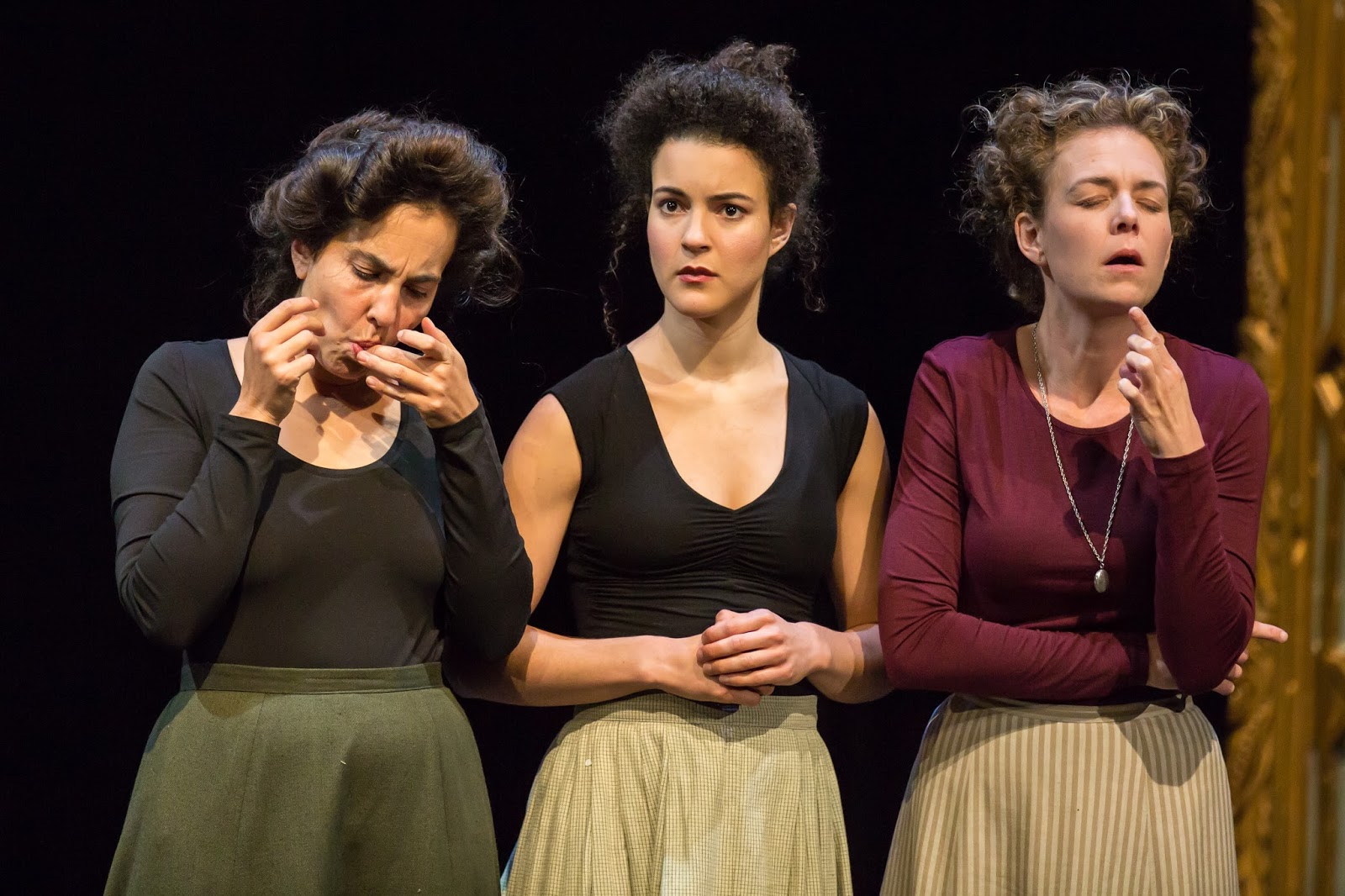 On Stage in TO: Sex & Ambiguity

Age of Arousal (Factory Theatre)
The best thing I’ve seen at the Factory Theatre in ages, Linda Griffiths’ Age of Arousal is funny and sad and executed with plenty of pathos to balance its slight lecturing vibe. As the lone man in the play, Sam Kalilieh is the exact kind of charming that leaves you unable to fully trust him but unwilling to write him off. Marie Beath Badian is less nuanced as the grating and wishy-washy Rhoda though much of the problem comes from her stiff and unnatural accent work. Julie Stewart is sadly somewhat missable in a role designed to loom effortlessly large (a former suffragette who now runs a school for “odd women”) but the trio of sisters who form the heart of the play are unforgettable and make Age of Arousal what it is. Leah Doz as the young, pretty sister Monica is a ray of curious, restless, irrepressible sunshine. It isn’t until her first scene (a quickfire flirtation with Kalilieh) that the play really starts to pick up power. Juno Rinaldi and Aviva Armour-Ostroff play her spinster sisters with wild quirk and deep humanity. Rinaldi, in particular, forges a sublime performance out of deep-seated melancholy, downtrodden stubbornness and organic oddity that encapsulates both perfectly time high comedy and slow-creeping sadness. Griffiths’ text is deft and complex- asking infinite questions about feminism, womanhood and sex without falling for the trap of attempting to answer them all- but its the performances at the heart of the piece that really pulled me in.

The Trouble with Mr. Adams (Tarragon Theatre)
This world premiere by the ever-bold Gord Rand is a deeply divisive, scarring, ambiguous, uncomfortable play about a panicky, selfish, cowardly but not really villainous man (Chris Earle, perfectly pitiable) and his relatively innocent but arguably abusive relationship with a teenage girl on his volleyball team. The story plays out in three intense, wordy scenes between Gary and his wife, his lawyer, and the girl in question, respectively. Charlotte Dean’s overly sexualized costumes don’t help the cause but Philippa Domville, Allegra Fulton and Sydney Owchar all deliver excellently as the tough, complicated women who easily out-merit the man who unites them (though I certainly could have done without the incessant “Mr. Adams”-ing of Owchar’s dialogue). The Trouble with Mr. Adams is about personal responsibility, self-preservation vs. self-gratification, self-loathing and selfishness. It’s about how inch by inch we creep over lines and how a seemingly small move can destroy a life. It’s imperfect but impactful and, though the play makes no room for absolutes, I believe the latter is always worth the former.

Cabaret (First Act Productions)
The second Cabaret to hit Toronto stages in a matter of months distinguishes itself well with an intimate, immersive atmosphere (complete with shirtless bartender and cabaret tables) and a strong ensemble that balances the usual group of female Kit Kat dancers with male counterparts who help to drive home the eventual pink triangle fate of all but four characters in the show (director Nicole Strawbridge’s clever staging of the final moments furthers said tragic reality). Danik McAfee is a sly and mercurial Emcee who deploys his moments of nuanced sincerity perfectly (my heart broke into a thousand pieces when he uttered a final “à bientôt”), the glimmering Debora Joy is wonderful as a guarded but joyful Fräulein Schneider, and Brian Bishop, though a little wooden, is a kind and principled Cliff with a pretty singing voice (a rare bonus in the largely non-singing role). Christie Stewart, however, is woefully miscast as an over-directed and insincere Sally Bowles. Stewart has a gorgeous voice but she’s forced to fight its natural placement, awkwardly reaching for belt notes she doesn’t have but could hit perfectly if she wasn’t so adamantly avoiding her head voice (this feels like a music director decision so let’s not place all the blame on Stewart; really, it’s just a casting issue more than anything). Character-wise, Sally is admittedly a difficult beast but Stewart and Strawbridge choose to emphasize her artificiality above her humanity, which does her no favours. I spent the entire production wishing she would just pull off that terrible flapper wig and show us who she really is. In this regard, the forced nature of Stewart’s belt range actually has an intriguing effect, replacing her usual vocal perfection with a sort of strained intensity that suggests a rough reality underneath the fading razzle dazzle. If this quality permeated the larger performance, I would have called it a fascinating take on the character, hinting at a complex backstory we’re never really privy to. But Stewart hides too consistently behind a posh accent and flighty blocking in the scenes between her more engaging musical moments, making the performance’s rougher elements seem like execution flaws rather than the character insights they might otherwise have been. I hold First Act to a high standard because they are usually able to meet it. Their productions are smartly executed and generally well cast; here they are just one or two choices off of excellent but those choices were crucial ones.