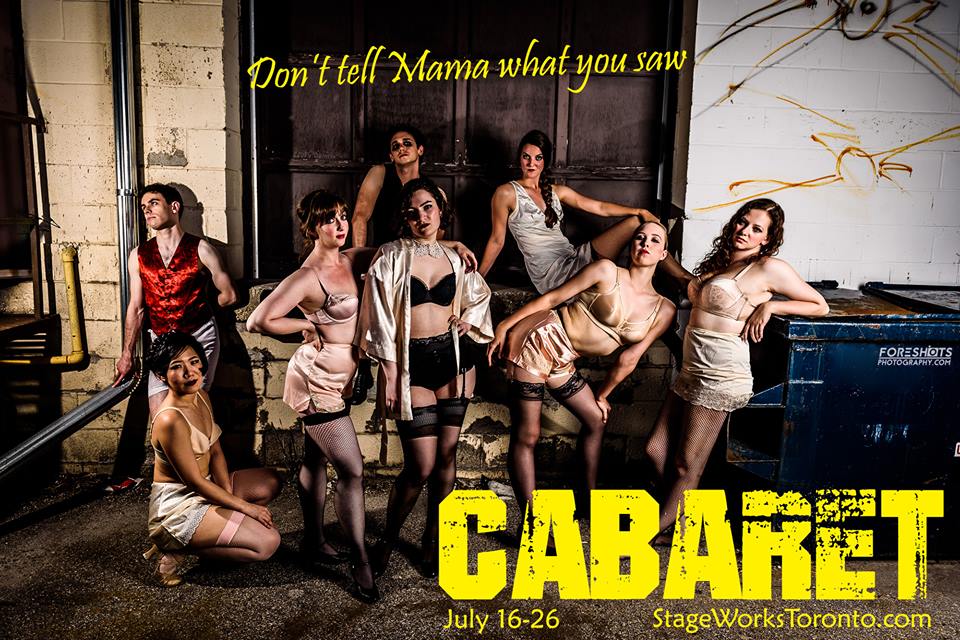 Every year, StageWorks Toronto takes some sort of step forward in the quality of their musical production. In 2013, they tackled one of the most difficult scores ever written; 2014 featured their strongest cast ever with an across-the-board excellent ensemble; 2015 is the year they finally eliminated blackout set changes! While that key feature is of immeasurably importance to me, it’s merely symbolic of Michael Yaneff’s generally strong directorial work on this year’s show- Cabaret. One of the most over-produced musicals in the canon, Cabaret feels like a strange choice for the company that usually favours lesser-known work with an emphasis on music and story over dance but Yaneff makes a few key alterations that give the under-written book more punch, including a wallop of an ending.

Smooth transitions help to keep the story moving even as Yaneff refreshingly carves out time to explore oft-overlooked characters like Bobby (a beautifully open-hearted Danik McAfee) and Herr Schultz (Buck Delaney whose bittersweetly giddy performance steals the show). His only purely directorial missteps are an over-reliance on the spotlight (turning a few too many songs that might have been important relationship moments into soliloquies) and strangely inorganic use of nudity (there are random flashes of skin that feel gratuitous when a sort of omnipresent bare-ness would have been the stronger choice).

I might go so far as to say that Cabaret is the best-directed StageWorks production thus far but a grating Sally Bowles makes the show hard to truly appreciate and the problem lies as much in Yaneff’s unhelpful choices for the character as it does in his casting of Shai Tannyan who can handle neither the character’s demanding vocals nor her easy allure and authentic emotional journey. The rest of the cast fares alright (Jean-Paul Parker is a fine if fairly standard Emcee and Melly Magrath an enticingly layered Fraulein Kost) but only Hugh Ritchie’s superb turn as a judgementally principled and hesitantly charming Cliff is able to make up some of the ground lost by a disappointing Sally.

The cast is uneven and thus the show is too but, with Cabaret, StageWorks has taken a major step towards the right kind of direction.