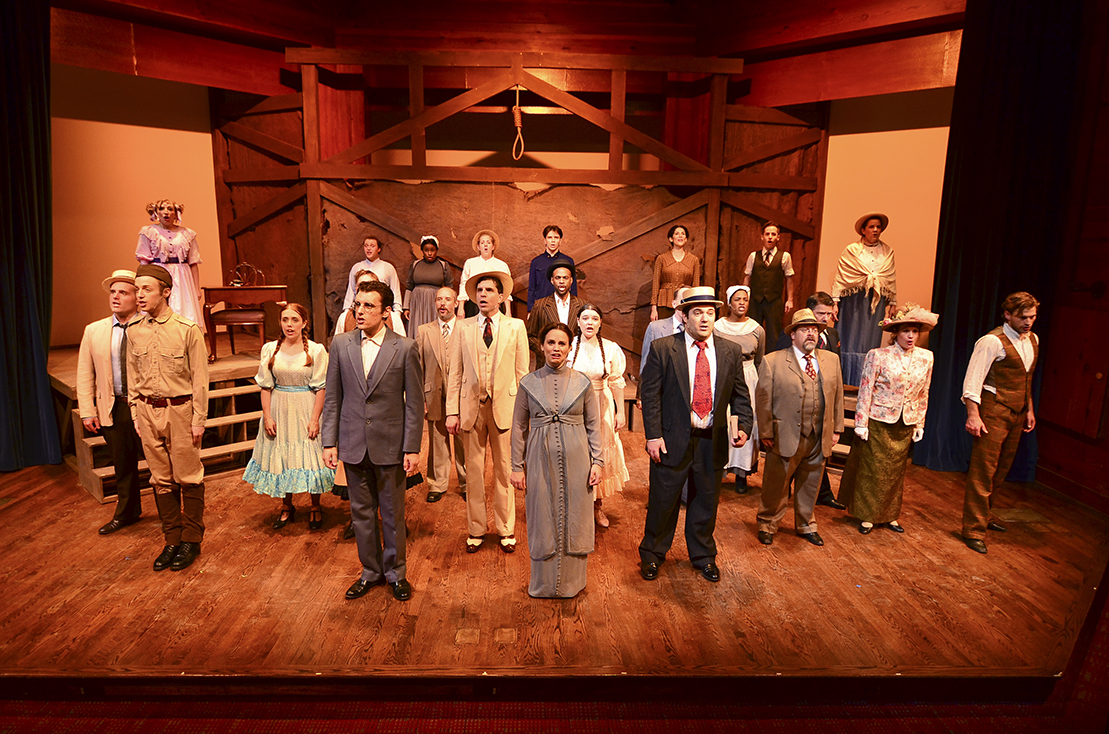 In my opinion, Parade, as a text, is a grand achievement in musical theatre. The fact that it is only Jason Robert Brown’s second (arguably third) best work is therefore astounding but we’re not here to discuss the composer or Alfred Uhry’s book (again).

StageWorks Toronto was coming off of Urinetown when they chose Parade and the leap is a fascinating one. Urinetown is sly, self-referential and silly (personally I hate it, but such feeling are controversial); it is also, in a broad-strokes sense, fairly simple to execute (which StageWorks did, effectively). Parade shares themes of corruption, prejudice and power with Urinetown but is otherwise a completely different animal. It’s a dark-as-pitch true story about a horror show of hatred and sadness in 1913 Georgia. Everything is more complicated, from the character arcs to the vocal arrangements, set and period costumes. But it’s worth it. Parade is a giant mountain to climb but, if you can make it, the view is spectacular.

StageWorks does a fantastic job for a community theatre company, a merely decent job for a professional-calibre indie company (it’s unclear which identity the relatively new company wants to claim). Big-deal director/choreographer Lorraine Green-Kimsa drops the ball quite dramatically with a very awkward use of the George Ignatieff Theatre’s fairly decent space, shuffling the ensemble off single-file to the wings at the conclusion of group scenes (and why are there blackout set changes? WHY?!) but capable music director Tom Kerr leads his band through the crazy-hard score with only one audible mishap and somehow- between sound designer Matthew Hyslop and the theatre staff on the sound board- the balance is as close to professional quality as I’ve heard in a long time from a big musical in a small venue.

Performance-wise, most of Parade rests on the shoulders of Scott Labonte as accused murderer Leo Frank and he handles the challenging role well. He’s charming enough to reel the audience in without being so winning as to ruin the credibility of the plot. His voice is pretty if imperfect and shines particularly bright in his heartbreaking rendering of “It’s Hard to Speak My Heart” (Leo’s timid self-defence at his trial and a centrepiece of the character). He’s also believably slimy in the fictional recounting of his office affairs (aided by a particularly haunting Kelan Brown leading the trio of excellent factory girls) and develops pretty good chemistry with his Lucille (hesitant at first then gradually warmer, as it should be). In Leo’s all-important wife, StageWorks co-founder Lauren Lazar finds a part that fits wonderfully in her well-trained vocal range. Her acting skills are far out-matched by her vocal ones but she emotes beautifully whenever the music gives her a little backup. The production’s most well-rounded performance comes from Luke Witt who stands out as the young, heartbroken and unspeakably angry Frankie Epps (nailing both the vocals and the taxing emotional demands of one of my favourite numbers in the show “Funeral: There is a Fountain”). David Michael Moote starts the show on an incredibly strong note with a stirring performance of “The Old Red Hills of Home” (one of the hardest pieces Brown’s ever written) then brings invaluable intensity to the ensemble, though the hardest parts of that key song do elude him a bit. Twaine Ward’s captivating crumpled ball of a Newt Lee transforms dramatically into a spirited take on Jim Conley (perhaps a bit too spirited for the man largely presumed to be the real murderer of Mary Phagan) but his first-rate baritone works well in both parts. Most of the small roles (including Andy Ingram as a desperate reporter and Kelly Lovatt Hawkins as the strong and sympathetic Governor’s wife) are filled out with excellent thought and come together to form an ensemble that sounds great together (even as they shuffle horrifically into the wings single-file). I should also point out Luke Slade who continues to be peculiarly fascinating in whatever small role he takes on (he’s particularly striking in the well-choreographed chain gang scene) and Marlo Alcock who does a beautiful job with the tragedy-laced but comparatively small role of Mrs. Phagan.

Again, it depends what context this show is meant to be seen in. If it’s community theatre, the strong execution of incredibly hard material needs to be massively praised then ultimately overlooked in favour of the indescribable emotional punch of Brown and Uhry’s show and the effect it has on its audience. If this is a company of young artists looking to make their mark on Toronto theatre in a professional way, then I’ll say that the execution could have been stronger. Even the company’s best voices falter a little and the pedestrian direction is just plain unacceptable (if you can’t think your way out of the necessity of blackout set changes that jarring then you need to resign and let the company find a new director). The acting in the songs is excellent but the lines themselves need more truth. The fury needs to come through more viscerally from the ensemble members looking to put a man to death for the crime of being unpopular and Jewish in the American South. Everything needs to tighten. Everything needs to simmer. But mostly I think that StageWorks just needs to pick a show as good as Parade for their 2014 season and I think they’ll be just fine.