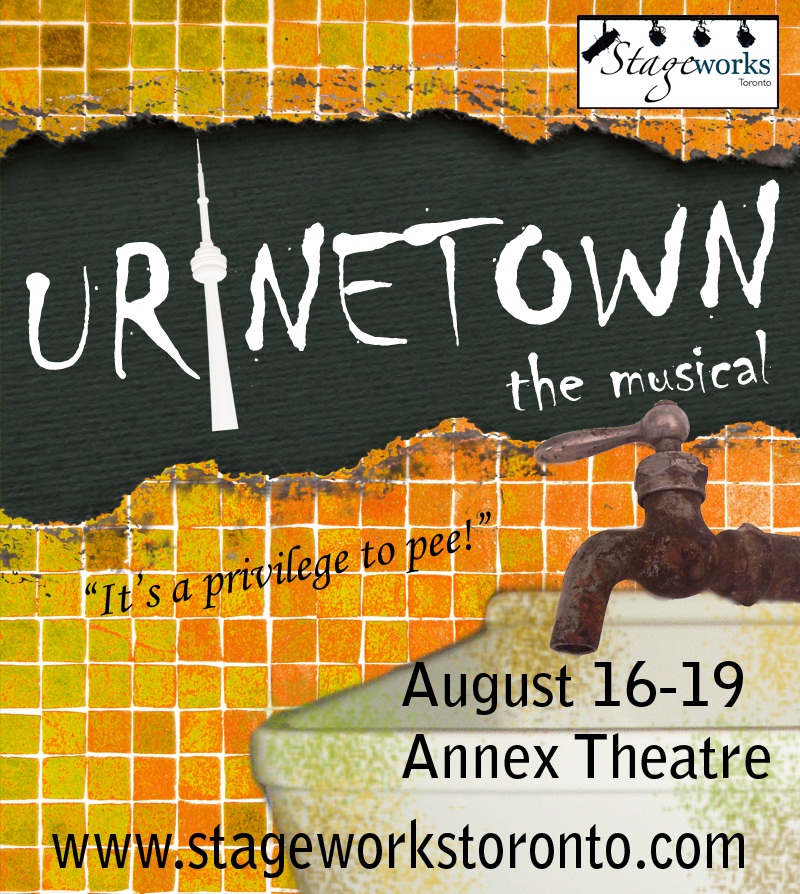 It’s a Privilege to Parody

Heads up, the first part of this article will be about Urinetown itself. I’ll tackle the production later on. Don’t take the opinions in the first part as a reflection of my feelings on the generally good Stageworks show. If you want to read only the review, it starts by the production photo so just scroll down and start there.

Stageworks Toronto’s recent production of Urinetown sparked great debate between me and the friend I took with me. She’s a real comedy person, someone for whom satire for the sake of satire is worthwhile if done well. She’s also a musician, who listens to the music and cares less about the words. I’m the opposite. Story story story, if you’re a regular reader you know this already. If you can tell me a compelling story full of compelling characters and also manage high satire, go for it. If not, then I’d rather you drop the irony, please. Full disclosure: I went to see Urinetown because I had a friend in the cast, otherwise it isn’t something I would volunteer to evaluate. It just doesn’t suit my tastes. All the characters are caricatures, mocking (lovingly, but still mocking) the conventions of a medium I highly respect and, being unmoved by broad comedy as I am, the jokes aren’t mindblowing enough to make up for that. The songs, similarly, each mimic a specific style, from the love ballad (the particularly criminal “Follow Your Heart” lampoons sincerity) to the act two gospel ditty (“Run Freedom Run”, which is one of the play’s best despite not making any sense) to the rousing inspirational group song (“Look at the Sky” inspires the poor by, I guess, making them look at the sky). Many of them (especially “Follow Your Heart”) are purposely bad, or at least sport horrendous lyrics that actively make fun of the singers. The friend I was with protests that the songs’ musical sophistication makes up for their woe-ful lyrics (and I’ll admit that some of the melodies are actually pretty good, also all the counterpoint sections) but I think there’s no coming back from “no anger or badness just laughter and gladness”. After *Spoiler Alert* Bobby dies, the show drops the attitude ever so slightly and pays him tribute with its best song “Tell Her I Love Her”. It’s still intercut with comical bits about Bobby’s senses shutting down but that’s comedy from within Urinetown and its story, it’s not comedy from bad versions of other people’s work. I enjoy the meta charm of Officer Lockstock and his self-aware narration but, beyond that, every time Urinetown takes a swipe at West Side Story or Kiss me Kate it loses sight of its own point, so when it comes time to really say something in the end no one believes the characters (no girl silly enough to sing “Follow You Heart” in earnest could lead a revolution. Just no). Or at least I don’t believe the characters, though I know I’m not a typical audience member, I’m far too grumpy for that.

Okay, on to Stageworks’ actual work.

Let’s start with the director, Lorraine Green-Kimsa, who does a really great job of staging a big show in a small venue. The Annex Theatre is actually a really cool space and Green-Kimsa makes a point not to waste the awesome balcony and staircases. She also makes a point of Toronto-izing the story, making its final point a little more relevant (the revolutionaries hide out in the ruins of Bathurst station and the CN tower takes the place of the “i” on the poster). The director is also the choreographer and finds a way to use the dancing to nod to other musicals without detracting from her own story (or making it funnier by making it terrible). Music Director Tom Kerr sets the singers (and especially the strong chorus) up for success and leads the capable but small band expertly. Vocally, many of the leads have strong technique and spectacular top notes (particularly Lauren Lazar as Hope Cladwell and Ashlie White as Penny Pennywise) but stumble with middle range. Andrew Soutter’s Bobby Strong is goofily charming enough to pull off leading the makeshift revolution and to carry the lovestory but his voice, though pretty, isn’t as strong as Bobby needs. Will van der Zyl, on the other hand, isn’t a singer at all. Officer Lockstock is a mostly un-sung part and van der Zyl delivers the wry confidence well, but when he does sing he simply can’t keep up with his costars (all of whom have strong voices, even if I’m picking on them).

All the acting is sort of like the singing in that there are plenty of highs (including Oscar Moreno’s hothead Hot Blades Harry and our very own Leeman Kessler being creepy-funny as Mr. McQueen) but the average is mostly just decent. The exception to that would be Sarah Butler whose Little Sally is spunky, clever and adorable instead of annoying like most renditions. The highlight of the production, however, is hands down the chorus (or rather the 4 “ensemble” players as well as a pile of tiny characters with names like Soupy Sue and Billy Boy Bill). It’s an incredibly strong ensemble and you can tell that the smaller roles were tackled with the dedication of a star vehicle. Paul Silvestri stands out along with Moreno, Carly Hall and Nicole Strawbridge (the triple threat who most stole my attention and deserved a much bigger part). I also really loved Robyn Ship as Tiny Tom and laughed almost every time he said a line. Little details- like Carly Hall being touched that Hope said criminal records don’t matter or Butler’s Sally looking to her teddy when it’s declared that they can do anything with Anyone- make the production better than its source material. These characters, however written, are detailed and honest and that makes all the difference.

I’m usually a “content is king” kind of girl but in this particular case it seems that a great cast and strong direction really can make all the difference.