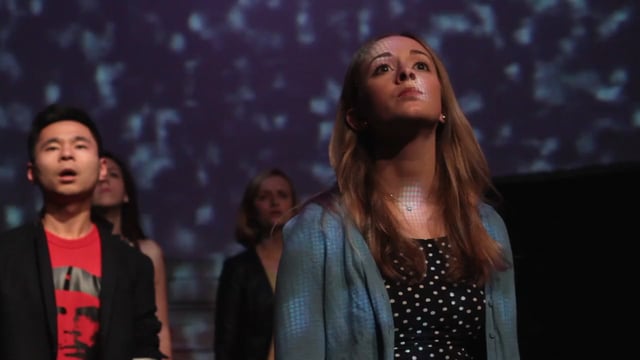 Casimir & Caroline, Up For Discussion

Workshop productions aren’t really supposed to be reviewed, especially when they’re only playing for one weekend and the reviewer can’t make it on opening night. So, I suppose, you shouldn’t really call this a review. It’s more of a monologue about Holger Syme’s wonderful new adaptation of Ödön von Horváth’s Casimir and Caroline with The Howland Company. Let’s call it my after-the-fact (expanded) contribution to the lively talkback that followed the show (refreshingly less of the usual “here’s a personal story” and “how did you make the props?” from the audience and more “how did you feel about the adaptation’s gender politics?” from Syme and the cast).

The original play was written in 1930s Germany but it begins with a stage direction that states the setting is “now”. Presenting it as a product of its time was therefore deemed, by Syme, untrue to the text as it was meant to be experienced. Thus, the play’s small German village becomes a large company in Toronto, the vapid language of our time is introduced to replace Horváth’s original satiric dialogue, two underwritten prostitutes become fully formed modern women, the character ages are altered to more pointedly focus power dynamics and tell a single-generation story, 1932 becomes 2015… and a chicken-selling cart is written out because it’s “gauche” to have a cart onstage, obviously. If you knew absolutely nothing about this play going in, your only clue that it is anything other than a completely contemporary piece of new work would be the question of “who the hell names their kid Casimir?”, making Syme’s structurally identical and remarkably faithful adaptation all the more impressive. With the developmental help of the fresh and ambitious voices at Howland, Syme has created something distinctly here and now out of something very much there and then.

The central issue discussed at the talkback came up when one savvy audience member read into Courtney Ch’ng Lancaster’s instruction to speak up with any criticisms of the play and turned the question around, asking Syme and the cast “what are the elements of the production that you feel still need improvement?”. Cameron Laurie, who portrays the play’s only real “nice guy”, responded that the gender politics still don’t sit very well with him, despite how far they’ve come from the brutal misogyny that pervades Horváth’s original. This led to a fairly involved discussion that mostly centered on the characters of Ellie and Mary (though, had the talkback lasted longer, I would have been very interested to get Lancaster’s take from the point of view of her trod-upon but sneakily ferocious character Amanda).

Mary and Ellie are the aforementioned prostitute characters whom, with the help of actors’ improv, Syme has converted into what one could dismissively call office bimbos. Played with killer comedy instincts by Sophia Fabiilli and Ruth Goodwin (the latter is particularly well cast, playing to her strengths in her funniest role in ages), Ellie and Mary function mostly as comic relief through the first half of the play, holding down the majority of the “look how vapid we’ve all become” cultural commentary as they gossip about hot guys and dissect text messages (a rhapsody on “haha, yeah” is particularly masterful). The distinctions between and relatable humanity of Ellie and Mary only become apparent as the play moves along and they become the prey of Mishka Thébaud’s captivating Shaw (a character whose true nature is insightfully hard to decipher throughout most of the play as you’re constantly judging him against the man beside him).

Though all the women in the play suffer at the hands of men, the worst is felt by Kristen Zaza’s sincere Liz. Costumed in extremely skimpy clothes with a floppy sweater she wears like a security blanket, Zaza’s engaging vulnerability makes her mistreatment at the hands of her boyfriend Frank (a volatile and frankly terrifying Jesse Nerenberg) incredibly affecting. The couple share just a few moments of real fun and connectivity during the party that forms the basis of the play but they, combined with the deep insecurity layered into Zaza’s performance and the threatening undercurrent in Nerenberg’s, are enough to make her tragic attachment to him feel truthful.

If anything, I might argue that the company’s conscientiousness when it comes to the female characters has created something of an imbalance of humanity in the subplots. Ellie, Mary, Liz and, to a lesser extent (one standout scene excepted), Amanda are well fleshed-out while I think the more simply dark male characters like Frank, Shaw and Michael Man’s pathetic and powerful Rankin are the ones who need a bit more authorial attention. The women, though certainly put-upon, feel very real and thus illustrate the difference between a text about misogyny and a misogynist text, but the effect would be all the more startling if the men felt just as real.

This is illustrated perfectly in the main plot wherein Alexander Crowther’s pained and torn Casimir thoroughly hurts Hallie Seline’s sensitive Caroline less out of malice and more out of simple human failing. Just as Shaw is masked a bit by Rankin’s icky shadow, Casimir is also judged by the men he stands next to (an incredibly realistic insight). Contrasted with Frank’s harshness and the imbalance in his relationship with Liz, what one notices about Casimir is the grounded charm Crowther brings to the role and his effortless chemistry with Seline. When he’s compared to Laurie’s sweet and goofy Sanders (another male character who could use some fleshing out), on the other hand, he appears hostile and moody. Of course, anyone would appear hostile and moody when compared with the utter glee of Laurie and Seline together on stage (I could watch an entire play of them just dancing and doing karaoke) but the contrast is notable and makes Casimir the lone man on stage who truly feels like a real person rather than a representation of something bigger.

This perfectly cast workshop is, by nature of being a workshop with a very involved feedback process, open to be picked apart. But it needn’t be. The collaborative development process has ironed out most of the company’s concerns, especially Laurie’s observation about the tricky representation of women, to the point where I think they’re mostly in their head. Some characters could still use a bit more humanity but most don’t need it. I would argue that Holger Syme’s funny, sad, riveting version of Casimir and Caroline is ready to face the world (and the critics) unaccompanied by a workshop asterisk.