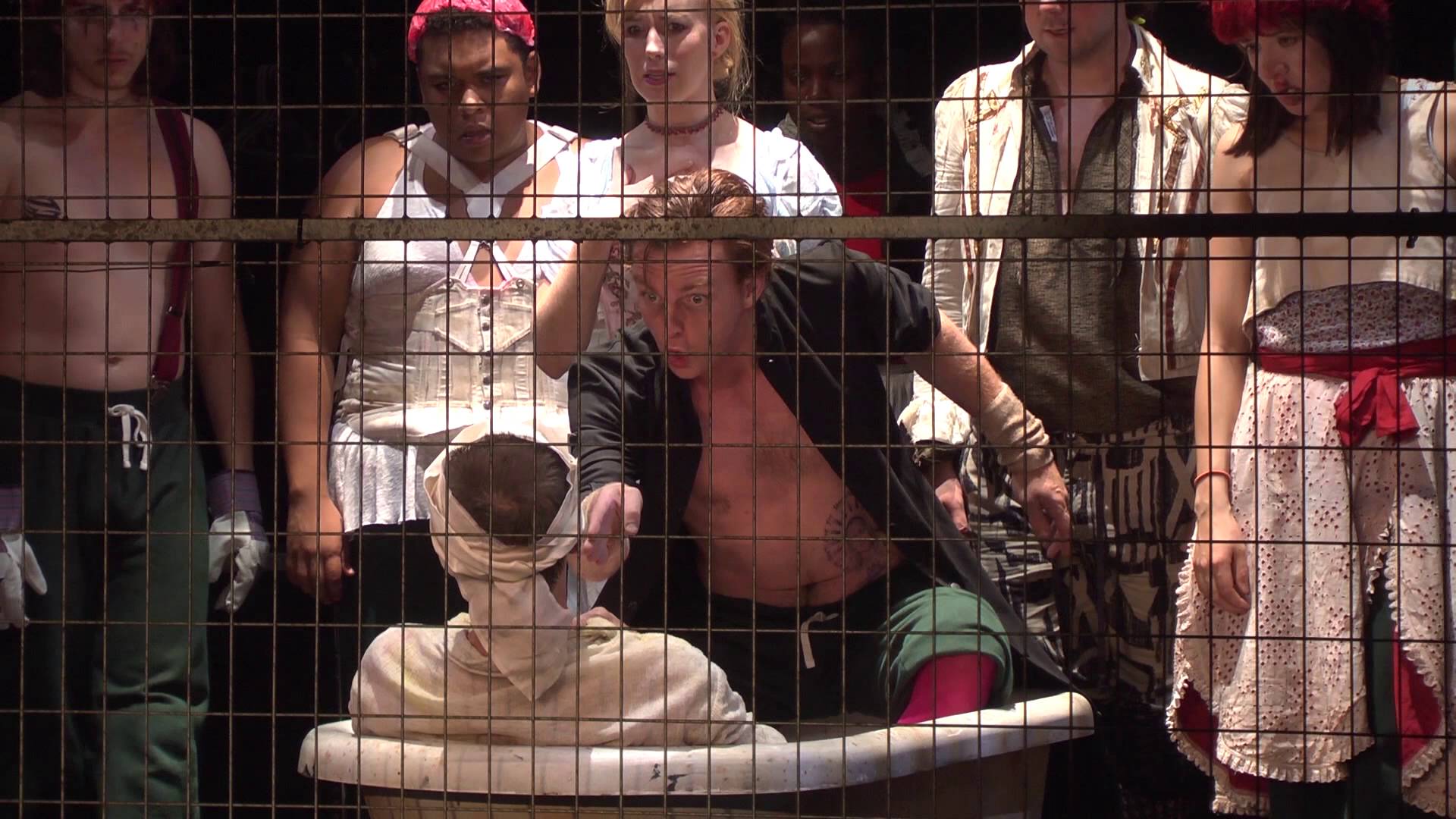 After a summer off to make way for Panamania, Toronto’s biggest repertory company has returned to regularly scheduled programming with a diverse slate of four new productions running now through the 18th, soon to be followed by returning favourite Spoon River. Here’s the lowdown on their latest:

Marat/Sade
This weird, bold, complicated, controversial, thoughtful, accusatory, uncomfortable display of pure theatrical guts takes its audience into a literal and philosophical prison full of toothless punk rockers and unapologetic socialist themes as “The Inmates of the Asylum of Charenton” perform “The Persecution and Assassination of Jean-Paul Marat” as directed by crazy fellow inmate “The Marquise de Sade”.

None of the many familiar faces in the large omnipresent cast appears in a context in which you’ve seen them before (grounded Oliver Dennis is a loudmouth scamp, sweet Derek Boyes a brutal guard, gentle Richard Lam has a buzz cut and short fuse, reserved Gregory Prest plays a ridiculous letch, sunny Hailey Gillis has dead eyes, black lips and an electric guitar) but everyone is working at full steam, the stage filled at any given moment with a thousand careful choices worth analyzing (my favourite detail- the brilliant Frank Cox O’Connell’s fanatical Jaques Roux literally bangs the drum for his cause throughout all of the production’s plentiful music before becoming the very last man to surrender). In concert with the ace creative team of director Albert Schultz, designer Lorenzo Savoini, and composer Mike Ross, the intense ensemble makes Peter Weiss’ abstract text (translated by Geoffrey Skelton with verse adaptation by Adrian Mitchell) into something entirely new.

Forever Yours, Marie-Lou
I’m going to level with you, I didn’t feel much for this Michel Tremblay quartet (performed by Genevieve Dufour, Patricia Marceau, Christian Laurin and Suzanne Roberts Smith, three of them properly Quebecois). I found the characters hard to connect with and the monologue-heavy structure unhelpfully distancing so I ended up intellectually processing smart creative decisions like setting the play amongst the literal wreckage of its central disaster instead of really investing.

It was intriguing, then, to hear my mother share her strong feelings about the show as we made our way out of the theatre. She talked about the complexity of the characters and how everyone was more than the other characters reported them to be. She talked about conflicting narratives, how Tremblay subtly divulges backstory, the roles of religion and psychology in the text, what Carmen’s silly costume revealed about the character’s cultural influences in 1970s Quebec and how Smith layered her with just the smallest dash of true contentment to separate her from her trapped family and their uncompromising world views.

To clarify, my mom doesn’t do this; she usually limits her commentary to “I enjoyed that” and would almost rather be watching Guys & Dolls. So why am I telling you all this? Because Forever Yours, Marie-Lou is about viewpoints, how two people (or four) can look at the exact same thing and see something completely different. I saw nothing special but my mom, she saw more than she’s ever seen before.

Happy Place
Pamela Mala Sinha’s new play as directed by Alan Dilworth begins on designer Lorenzo Savoini’s brilliantly blank white stage. It’s a cell or a padded room or a blank canvas – whatever it is, it’s also nothing. Then Oyin Oladejo enters as a character named Samira whom we will soon learn has been institutionalized for trying to kill herself and she begins to redefine the world around her. She finds doors and windows where there were once just walls, a TV is opened like a cupboard, a couch appears, a table, a hallway. Everything is stark white but it’s something now, it’s the place where six depressed women are trying to recapture something remotely resembling happiness.

Throughout the play, Samira and only Samira will continue to adapt the space for each new scene. It’s an intriguing detail that pulls the brilliance of that opening moment through the rest of the 2 hour 35 minute running time but it’s not really reflected in Sinha’s narrative, which doesn’t suggest Samira as a window or even a truly central focus but rather is about the equal and unique ways in which different women can suffer from the same thing. The across-the-board excellence of the ensemble plays into the egalitarian side of the script but Dilworth’s direction never quite finds the same balance.

The Play’s the Thing
This is the deal, we know this by now– the payment due for the daring thrill of a Marat/Sade and the intensity of a Forever Yours, Marie-Lou and a timely new work like Happy Place is at least one trifle every couple of months. This is that. Diego Matamoros and the adorably earnest William Webster are a writing duo who become accomplices to their leading lady (Raquel Duffy, frothy and fun)’s affair and hatch an elaborate scheme to cover up her indiscretion and save her engagement to their musical collaborator (Gordon Hecht, dull in a pretty thankless role). Gregory Prest is a hoot and a half as a high strung manager and the script has some fun metatheatricality and hilarious passive aggression but, generally, The Play’s the Thing is not my thing. Smart, commercial means to a bold, artistic end in a fall season that could never be called anything but ambitious.