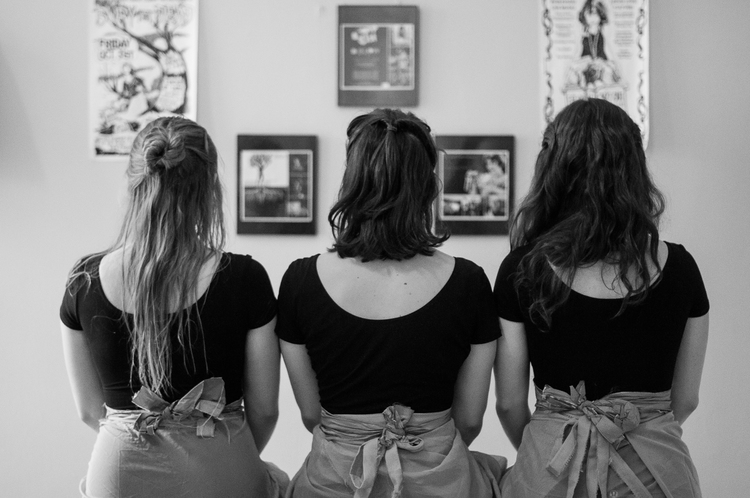 As I sat at Ted x Broadway last winter. I was baffled as Leslie Koch spoke animatedly about an apparent art oasis stationed in the middle of New York harbor, about five minutes by boat from my apartment. Having lived in the city for three years now, it was unfathomable to me that there was anything like that in lower Manhattan. Yet, Governor’s Island was out there and it was Koch’s responsibility to say yes to sculptors, painters, musicians, actors and others who wanted space to create and present their art.

This week, I ventured to Governors Island to see just such a creative endeavor in the form of Exquisite Corpse Company’s production Secession 2015. Despite both the name of the show and its setting in one of the many historic homes adorning the green space of Governors Island, a former military outpost, Secession 2015 does not recount tales from the Civil War. Rather, it evokes the spirit of the Secessionist art movement in Vienna at the end of the 19th century. Bucking tradition and conservative art norms of the time, the Secessionists were radicals pushing away from historical grounding. However, this sort of inhibition had its pitfalls (causing relationships to crumble, for example). The movement was also hindered by the political realities of the time period, including social constructs that prohibited women from holding prominent positions in the community (thereby making it difficult for them to become respected artists in the movement).

Directors Tara Elliott, Tess Howsam, Katie Lindsay, and Ashley Brooke Monroe have staged Secession 2015 as a progressive, immersive theatre experience, encouraging the audience to follow actors from room to room. Each scene depicts a different Secessionist’s professional experience, muse, motivation, and/or struggle with social conforms. Part biography, part emotional exploration, Secession 2015 is an intriguing and multifaceted look at a community of artists and the radical views that defined their movement; however, it relies heavily upon the audience’s knowledge of the Secessionist movement as a starting point. Painters and their muses are sometimes unidentifiable, leaving the audience to wonder which characters are based upon real people and which are, perhaps, fictional creations representing a muse or a painting or some other important aspect of an artist’s life. However, this uncertainty does not prohibit a patron from enjoying the spectacle. Some artists, such as Egon Schiele and his life-size female doll, are compelling subjects due to their eccentric behavior but are also ideal lenses through which to explore themes of feminism and social construct, elevating the play beyond simply life history of famous artists.

Some sequences are, however, better executed than others. In one particularly long-winded display, an artist* and his lover engage in an exaggerated battle of words best summarized as a “we should be together” versus “we cannot be together” argument. While humorous, it is unclear both who the people are and why their relationship calls for such drama. If there is social commentary tucked away in the scene, it is undetectable.

Capitalizing on the creepy spirit of the old house in which the show is staged, the directors utilized the entire space available to the performers (including spaces not generally accessible to the audience, like closets) and developed fluid transitions between performance spaces to tell distinct but interrelated stories about various artists. It was a nice touch to showcase fine art by a variety of local artists on the walls, which added character to the otherwise empty rooms but did not distract from the performance.

Members of the small ensemble each had an opportunity to play the principal in at least one scene, and all members of the ensemble were powerful performers capable of conveying great emotional vibrancy (in a small space, no less). The cast included Lee Collins, Anya Krawcheck, Stephen Godleski, Blaire O’Leary, Max Henry Schloner, Emma Walton, and Anna Young. O’Leary’s performance as muse-turned life-size doll was particularly striking. She slowly transformed her natural movements into a rigid and structured ballet, as if she was being manipulated by an outside force, and the result was both horrifying and beautiful.

Taking full advantage of the ethereal quality of the old homes on Governors Island, the Exquisite Corpse Company has crafted an emotionally charged experiential production that conveys the radical soul of the Secessionist movement while simultaneously considering the social and political climate in which the Secessionist movement existed. In totality, enthusiasts of art history and novices alike will find something worth pondering in this show, and it is well worth the ferry ride into New York harbor.