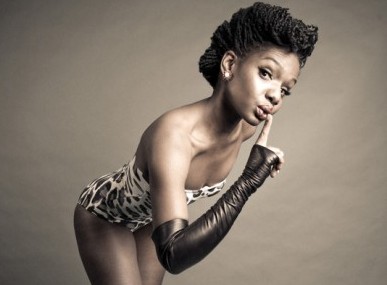 The Emancipation of Ms. Lovely (A-)
Almost every play that I have seen at Summerworks this year has involved characters and events that transcend whole decades, and sometimes centuries. In An Evening in July, two women seem to be living simultaneously in the early 70s and in 2015; in The Marquise of O- a 19th century text is faithfully performed and perhaps lived by characters who appear to also be living in the present; in Ayelen at least one person appears to be thousands of years old and another turns out to be a spirit whose temporal location is unknowable, and probably irrelevant. In The Emancipation of Ms. Lovely, Ngozi Paul performs scenes from the life of the titular character, which naturally necessitates jumping back and forth between moments in time, from childhood to adulthood.

This narrative fluidity is given an extra layer, however; Paul interweaves Ms. Lovely’s modern-day story with that of Sara Baartman, a South African woman who in the early nineteenth century was sold to the city of London and exhibited around the country for her large buttocks under the name the “Hottentot Venus”. Following her death in 1815, Baartman’s brain, bones and genitalia were displayed in museums for over a century. It’s a tragic and symptomatic story of a black woman who, along with being bought, was not only reduced to her body, but through it made into something strange and other. Paul, speaking as Baartman, takes the story back and gives it to her subject, presenting her as a canny and highly aware person who tried to forge a life for herself while knowing that she was considered by most who surrounded her as something exotic and strange, and fundamentally lesser. Ms. Lovely meanwhile is a woman negotiating the more subtle but still insidious ways that such a perspective informs her life as a black woman in modern-day Toronto. The histories of both women run alongside one another; one more quiet and ostensibly dour than the other (whenever we jump back to Baartman, the lights go down and the tone is always more careful and serious) but each focused on finding a place to settle themselves and their identity.

Director d’bi young anitafrika has surrounded Paul with nine mirrors that enlarge the Factory studio space and display both to her and to us Ms. Lovely and Baartman’s many angles, a device that works both as a thematic choice and also as a staging device. When Paul cloaks herself in a massive black synthetic blanket meant to symbolize a black hole of depression and insecurity, she practically vanishes from those mirrors, all aspects of her character vanishing with her. The energy of the piece rarely flags, though the transitions into the Baartman sections occasionally feel a little mechanical – – I wonder if there’s a way to pull them off without the same lights-down/soundscape shift, as the execution of these sections begins to feel a little repetitive as the play progresses. The leaps through Ms. Lovely’s life are more organic, such as when scenes of romantic discord as an adult are juxtaposed with reflections on realizing as a child that she was thought of as peculiarly different by her white friends and crushes. For the most part anitafrika and Paul have fashioned a focused work that feels like it could constantly be re-developed and re-arranged. That would be fascinating, particularly since Paul is a wonderful actor who seems to be able to do whatever’s required of her, seamlessly transitioning from childhood self, to teenage self, to adult self, as well as her family members, friends, lovers, and of course, Baartman. She converses with herself and her audience with equal ease, and her more choreographed moments are pulled off beautifully. With strong musical backing by onstage musicians Waleed Abdulhamid and L’Oqenz (AKA Non), The Emancipation of Ms. Lovely is a chance to see excellent performers performing in a passionately wrought production.

Ayelen (B+)
This is a story about a woman, Ayelen, who tries to free herself and her community of miners from the life-draining overlord Kemé (Marcelo Arroyo) who literally lives off the blood of his labourers. We are in a forest, location unnamed, following a genocide. Ayelen and her friend El (Manuel Rodriguez Saenz), thousands of years old, plot to overthrow Kemé, partly to free themselves and partly to ensure that Ayelen’s child, with whom she is pregnant, will have a freer life than she. Gilda Monreal, who wrote and directed the play, has developed a play with a strong mythological tone- – Ayelen’s story is partly narrated to us by a fourth character, Trayenkö (Lido Pimienta), who alternates between speaking in English and Spanish and who seems to be manifesting the story onto the stage. Her identity proves central to the plot and to the play’s themes of greed and capitalistic excess squeezing the lives of its massive amount of unseen players, and raises the question of what kind of freedom is really possible for workers trapped by the intense and seemingly endless limitations placed upon them.

The small Theatre Passe Muraille backspace has been given a minimalistic but convincing jungle-like ambience by Shalak Attack, Bruno Smoky (who have also done some great costume and makeup work for the play), André du Toit, and the sound (credited to “Shalak, Fiya & Cito”) and music (by Brandon Valdivia) is executed menacingly throughout. Huizi nicely balances self-doubt and fear with a growing revolutionary confidence, and Pimienta is a commanding presence who, though relegated to downstage left for the entire show, manages to make her sections dynamic and mysterious. Arroyo is convincingly menacing whenever he sits silently upon his throne, and equally tyrannical when engaging with Huizi and Rodriguez Saenz, though his rage can be a little monotonous and unshaded at times (perhaps this is a requirement of the parable-like nature of the story). Rodriguez Saenz is hugely energetic and in touch with the more animalistic aspects of the character, though he too could serve to have given more nuance to the characterization. In general Monreal could work on developing the tone of the play, as it seems a little unsure as to whether it should be played with the formality of a parable or the messiness and dynamism of a more modern piece. Still, the story is often engaging and the mythological atmosphere created by the cast and crew compelling.

Aperture (B-)
The AMY (Artists Mentoring Youth) Project is an educational program which uses theatrical training to bring together young women (teens to twenties) who work with one another and their teachers/directors to develop their understanding on a variety of ideas and topics, ranging from feminism, race, gender, and technology – – in short, vital social issues that are arguably being examined with greater intensity than ever before. The members of the Summer Performance Program branch of the project typically develop a piece based on these discussions and exercises, and this year the result of their collaboration is Aperture, playing at the Factory Studio Space.

Director Sarah Kitz has wrangled an energetic cast of eight young performers, all of whom seem to be playing versions of themselves and who, in the play, have come together following a massive crisis in which women around the world have all been struck down with a strange disease. Ensconced in what appears to be a film set, complete with lighting and a video camera that is traded amongst the cast, each performer is given a chance to deliver a performance piece related to their experience of growing up in a world that reflexively categorizes them based on their appearance. The cast is in constant movement, performing dances or moving the lights around, and the pace rarely dissipates. There are also some particularly striking moments delivered from the actors, particularly Bessie Cheng, who discusses being a young gay women with interests in theatre whom people constantly expect to be interested in aspects of Japanese pop culture despite the fact that she is Chinese.

Indeed the whole cast ultimately works well together, but the emphasis on discourse and realms of experience means that there isn’t a whole lot for the audience to discern that isn’t blatantly discussed in the play. That’s not a negative necessarily, but it does mean that there’s little nuance to be found or much dramatic urgency animating the piece. Of course the urgency attached to the unfair precariousness that comes with negotiating the world as a young woman is an essential issue, and the fact that there is so much for these young performers to have mulled over, and to have had to mull over, is proof enough that watching them work through this in a fairly straightforward way is still important. But the theatrical impetus driving these monologues and conversations still feels thin (the crisis that instigates the discussion is, so far as I could tell, quickly forgotten). The play can’t help having the occasional after-school special vibe to it, with characters quite literally countering each other with lines like “But hey! What about . . .”, or having to be distractingly vapid at certain moments to make a point about pop culture’s banality, like when Saba Akhtar’s character says that all this discussion is boring and she’d rather be watching Kim Kardashian. In short, it’s an intensely earnest play, and while that doesn’t de-value the discussion at hand, it does mean that its emphasis falls more on the side of educational than theatrical. Kitz and her cast are aware of this I think, which is why, towards the end, the audience is asked to contribute their experiences and impressions while the play is still in action.

Some of the raised topics are under explored as well – intersectionality is brought up a few times, and was discussed more in-depth during the show’s official talk-back afterwards, but it wasn’t examined as thoroughly as it might have been in the play proper. It was certainly implied, but an extensive discussion on the subject never really manifests. Given the range of experiences and performers depicted onstage, a more focused discussion of this particular issue might serve to animate the action a little more, while keeping the emphasis on specific perspectives of these young women. Still, despite these issues, the cast acquits itself well, and Aperture’s ambition to encourage frank discussion is vital.