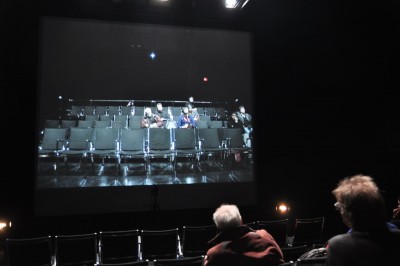 Offending the Audience (A)
Offending the Audience, originally written in 1960, and here conceived by Christian Lapoint, is, if nothing else, an experience. An extended, poetic, contradictory monologue, the piece is, for the most part, an hour of taking the rules of theatre and turning them on their heads. This play (which is not a play) is for a certain kind of theatre go-er: maybe one who doesn’t like going at all, or one who goes too often. A kind of hybrid between theatre and performance art, with Offending the Audience, you come into the theatre with expectations, experience it meditatively, and leave, with any luck, offended.

We enter the theatre. Lights shine on the empty seats. We navigate the space, finding our seats, politely aware of how difficult sharing the space can be. Politely aware of our affect on others. Maybe we see (as I did) someone who we know. We choose to politely ignore, or politely wave, given the context, the mood, the energy, the moment. The piece starts. Three synthetic voices—what sounds like a young woman, and older woman and a man— speak metatheatrically about who we are, why we are here, and what we are going to (not) see. Slowly, a screen is revealed, playing a live feed of… us. The audience. Siting, as we are trained to do, politely and quietly. This is the experience of Offending the Audience: taking Aristotle at his word, and holding a literal mirror up to the audience—pushing the unities of time, place and action to ask what conventions we have built around theatre, and what harm/good they do us. Speaking against realist conventions, and working closer to what we often imagine brechtian theatre to be,Offending the Audience promises the negation of theatre, and a dialectical return to the body, taking away from us the conventions of space time and action, while simultaneously returning them to us, through the concept of presence.

Very similar to John Cage’s 4:32, where the music became the absence of music, and as such, the noticeable nonabseance (presence?) of music through everyday noises of the audience, Offending the Audience takes away the spectacle of the theatre, and turns it back on the spectator. Making us a unity, striping us of our individuality, turning us into insidious objects, returning our individuality, calling us beautiful, telling us we’re untheatrical, calling us bitches, asking us to reflect on the time we’ve taken out, denying us a slice of time… these are but few of the dialectics that this performance piece attempts to explore through the long, boring, fascinating monologues. The point is that it can be both contradictions at once: that in the moment they ask us not to blink all we can think of doing is blinking. This is the tension that Offending the Audience attempts to achieve.

I say it again: attempts. It’s difficult for me to access what effect this truly had on the audience. Played originally in the 1960s, audiences we’re literally trapped in the theatre. Today though, you can pull out your phone, you can get up, you can move around. While these things are considered ‘rude’, they happen: the conventions of theatre don’t hold the same sway over audiences that they once did, as discussed in recent news stories on phones in the theatre, to give only one example. In my experience of Offending the Audience, phones were the first thing to come out, as one man in the front row took a picture of our projection/mirror. This opened a (polite) floodgate of texting, tweeting, selfies and, in my case, some casual sexting. One audience member moved about a bunch. One ordered some food (sushi, I believe). Some chatted quietly. One fixed her makeup. One left. But even given this, we were a pretty good audience. However, it begs the question: how uncomfortable are we likely to get nowadays, when the first thing we do when we wake up is grab our phones? How much do we allow ourselves to be bored? To be present? How much are we used to be watched—to observe our own ‘self-conscious’ performance? This is not a weakness of the show, but rather, though this tension, its provocation.

My only criticism of the show is that while it balances well the performance art/ theatre hybrid, it is, in terms of performance, doing nothing new.Offending the Audience, while is certainly an enjoyable and provocative experience, is replaying performance art ideas that are decades old. And while it doesn’t claim any kind of novelty, this piece would almost be cliché in the performance art context. But it is a play. That, however, doesn’t make it any less cliché. As someone who genuinely enjoys performance art, I genuinely enjoyed this performance. I was not offended. And that is, annoying, paradoxically, perhaps the point.

The Hum (B+)
“Can you hear it,” Julia asks in the opening of The Hum. “The hum of the earth?” The Hum is an endearing exploration of family, environment, music and art. Julia, John and their daughter Jenny talk about their family canoe trips, sing their favourite songs, and reflect on the world around them. The strength of this show is in the outrageous amount of love that flows across the stage between family members. The Hum is a family friendly show, but good reminder for us cynical theatre-goers too.

The family dance together, sing together, ask each other questions. They hang out on the couch. All of this is thematically linked through concepts of ourselves in nature: simple ideas like looking at the stars or knowing the names of flowers are given quiet meaning. There is a quiet innocence to the performance. A sweetness that spreads into the audience. A series of performative moments, from asking Siri existential questions, to asking a tree how it communicates, are all explored as a family, through music and art. It is with a child-like wonder than we are asked to watch The Hum,and through this, there is a kind of utopia for the future.

It is a utopia that I fear might be naïve. And the few moments that took me out of the story struck me as such. But over all, they managed to maintain innocence, happiness, thoughtfulness, and curiosity without descending into the cliché. Not an easy feat. One moment, when the father and daughter danced together, was so simple, sweet and loving that it brought me to tears. There were many such moments in The Hum. This performance is the perfect antidote to all thoughts pessimist, cynical, and nihilist. It’s quiet. It hums, and breathes, along with the audience, with an openness and a love, that is infectious.

Mapleman: The Canuk Crusader (B)
Mapleman: The Canuk Crusader is a satirical musical comedy of Canada’s super hero: Mapleman. A play entirely performed by high school students from The Woodlands School in Mississauga, Mapleman was good for what it was: a high school play. The script was tight, if a little two-dimensional, and the performances suffered from the same plight as many teenaged performances: inexperience. That said, in an effort to avoid sounding condescending, I think Mapleman offers an breathe of fresh air in the Summerworks cannon. It was funny, energetic, and well worth it!

The story is about Mapleman, the Canadian super hero, who, on his way to a date, is kidnapped by his nemesis, The Broker. What’s set up is good, polite Canadian values versus the big bad capitalist world. Most of the jokes played on bad Canadian stereotypes: we are all eh-saying, hockey-playing, maple-syrup guzzling, peace keepers. Yet they didn’t pack quite the satirical punch I was hoping for. In effect, many of the jokes were a little old, focusing on what Canada used to be, and localized in Ontario Canada. They were mostly jokes we’ve heard before, ones that ignore our colonial history and current political climate.

Besides that, the performance was entertaining. The Canadian Baritones were probably the strongest in both their acting, singing, and comedic performances. Mapleman too was a charismatic, funny performer. There was a freshness to the energy, and excitement in the room. They also gave us timbits at the start, which was a creative way to create the tone for their piece.

Overall, I’m thrilled to see this kind of work in Summerworks. And while certainly an enjoyable performance, with the upcoming election, and today’s political climate, I would have appreciated a satire with a little more bite.