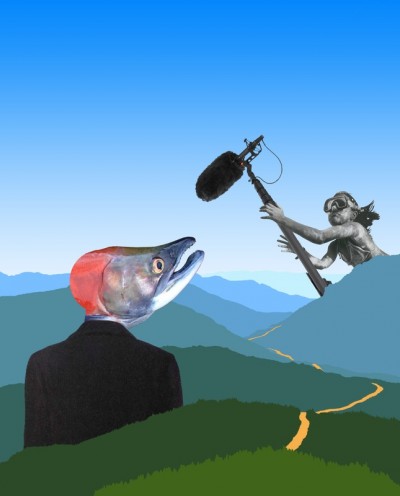 Like There’s No Tomorrow (A+)
Like There’s No Tomorrow tells the story of the Northern Gateway Project, and it effect on people on First Nations’ communities in Northern British Columia. Based on interviews conducted by Architect Theatre in 2012 and 2013, Like There’s No Tomorrow is the gentle juxtaposition between Canadian bureaucracy and the personal voice of an elder. As such, it is the clash of the oral histories and physical documents, project reviews and environmental concerns. This re-performed review panel is a documentary meets movement piece meets puppet show. It attempts to tell the story of the Northern Gateway Pipeline both through visual metaphors and through the voices and concerns of those affected by it directly.

This show is visually stunning, through the incredible puppetry/ projection work of Jesse Or, and the movement work of performer Georgina Beaty, Paul-Jean Prudat and Jonathan Seinen. Visual metaphors and landscapes weave in and out of one another in shockingly beautiful ways. So too, the voice of the elder and narrator is grounding and moving. Her voice is all that is needed to tell the story, and the performers don’t get in its way, but rather find a way to honour and illustrate it. This was the most recognizable aspect of the show: it was honouring. Honouring to the audience, to the First Nation’s communities, to the performers themselves and their own positionality. It is rare to find work that so beautifully balances the personal and the political, while still maintaining ethical and artistic integrity.

Like There’s No Tomorrow exemplifies what theatre can do artistically, politically and ethically. It offers a way into talking about the very difficult conversation of the Northern Gatway Pipeline, and it’s effect on the First Nations communities. By injecting the personal into this difficult, topical situation,Like There’s no Tomorrow, brilliantly explores how we tell the stories of other people, and the power that can yield. Visually moving, intellectually stimulating, and personally and politically heartbreaking, Like There’s No Tomorrow is not to be missed.

This is Where We Live (A)
This is Where We Live is the unlikely love story of Chloe (Jenna Harris) and Chris (Tim Welham), teenagers living in small town Australia. This stylized script, with dialogue that includes dense description, poetic lyricism, and even their movements and actions, would be difficult to pull off at the best of times. However, the energetic performances of both Harris and Welham lend themselves to this form. What results is a heartwarming coming of age story, and a classic love story with a twist.

Chloe is illiterate self-aware has spina bifida and a rocking bod. Chris is smart, odd, and the English teacher’s son. Chloe lives on the wrong side of the tracks, her white trash mother in love with another abusive man, her wit, razor sharp and her fuse, short. Chris is laughed at by his pontificating father, and protected, half-heartedly, by his drunk of a mother. He is shockingly well-read for a 17-year-old, and in love, unrealistically, but devotedly, with Chloe. Chloe from the underworld, he calls her. This Is Where We Live is the modern-day Orphesus/Euridice tale, where life and death is social standing, and the stakes are just as high.

The strength of the show was the chemistry of the performers. The writing, while at time very flowery, rings like music through Harris’ delivery, where other performances might have fallen too easily into cliché. The only draw back for me was the stage design. The lighting and set seemed almost as stylized as the script, which was too much for me at times. The stage, littered with ladders, a metaphor of the social ladder, perhaps, was contrived, though well executed. Finally, I found the costumes to be a little too stylized as well. While the script may have affected a certain lyricism, there was no need to have such poetry in all aspects of the show. As such, in an attempt to be both realist and poetic in design, the show succeeded at neither. This, overall though, was a small problem.

Face Value: West (B)
Face Value: West is a theatre-photography collaboration, where actress Tracy Hoyt looks at the evocative photography of Kate Ashby, taken in the west end of Toronto, and uses them as inspiration for improved scenes and characters. This west end edition of Face Value (previously Face Value: Lesliville, which was part of Crow Theatre’s Performance Crawl), while interesting conceptually, was, in practice, ethically problematic. I appreciate the talent of performer Tracy Hoyt, as well as the detail and beautiful physicality of her work. I’m in awe of Kate Ashby’s stunning photography, and enamored by the simple formal conventions of the improvisation. I can’t however ignore the ethical implications of a performance that, in this instance, lampooned the homeless and played on racial stereotypes. While I’m sure this performance had the best of intensions, it was first and foremost offensive.

The form goes like this: Hoyt looks at one photograph at a time, improvising different characters in the scene, as well as imagined ones related to the scene. She does this for 6 photos, occasionally coming downstage to tell her own stories. Once she has performed all 6 images, she then closes the evening by returning to a few, concluding these stories. This is rich ground for an interesting performance. And perhaps on other nights, it was. But the night I saw it, two of the images were of homeless people, and one, a karaoke sign. This lead to three incredibly insensitive scenes, two where homelessness became the butt of the joke, and a third, where Hoyt sang a Asian pop-style song, which I’m assuming, wasn’t in any particular language, but was rather an Asian stereotype. I was ready to give here the benefit of the doubt as the scene continued, but she decided to close the entire evening by singing another Asian-style pop song, in another Asian-style language, inviting the audience to join in at the end. Which many of them did. Yes, let’s sit in the Theatre Centre, in the increasingly gentrified space of Queen West, and laugh about Asians and the homeless.

What’s difficult in reviewing improv, is that every show is different. As such, I’m hesitant to ward against attending Face Value: West; maybe the next one will be good! That said, the form, while simple, was ultimately uninspiring, and Hoyt herself, clearly an incredibly powerful performer, both physically and in creative energy, lingered in the safe and problematic space of stereotype. “Can you accept what you see at face value?” the back of the program asks. “Can you see what else is there?” A provocative question. If this performance is any indication of the answer, however, it is a loud and resounding no. If there is anything thing beyond face value, Hoyt was unable to make that visible. Gone are the days that we can seamlessly re-perform the identity of another without some serious questions about the ethical implications of that performance. It’s irresponsible, and quite simply, a form of appropriation that erases power dynamics by claiming that we are living in some kind of post-racist, post-political world. Tell that to the homeless people that you imitated. The ones that are probably sitting on a stoop not 5 minutes away. The ones we will all probably pass on our way home, after the show.