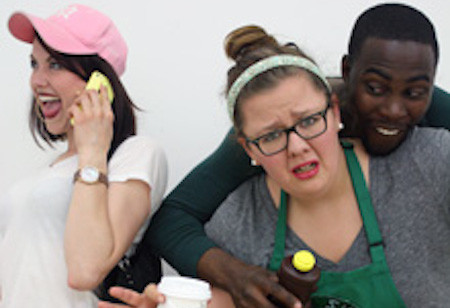 How May I Hate You? (B+)
The service industry is a torturous waiting room inhabited by increasingly older and more qualified employees, and How May I Hate You? bluntly but trenchantly spoofs the attendant frustrations that come with this reality. The series of sketches that make up the hour-long show are presented as skits performed at a training seminar for new employees, of which we the audience are the damned attendees (with the charismatically soulless Emcee (Connor Wooldridge) arranging name tags for everyone in the lobby before the show begins, and overseeing the event proper). The main trio of performers (Kelsey Johnston, Jenna Naulls, and Kano Wilkinson) are all very strong and committed to a range of ludicrously plausible scenarios. These range from employee Stella (Johnston)’s terrible first day in retail to a job interview that gets derailed by the interviewer’ (Naulls)’s assumption that because the candidate (Wilkinson) is black, he must be there are as a result of affirmative action (which at first seemed to me to be a musty-seeming piece of social satire, but which almost certainly does still speak to a lot of white interviewers’ implicit assumptions). Curiously, though all five performers (including occasional appearances by Christopher Coombes) are great, it is Naulls who I found the most funny even though she adheres to the most similar characterization throughout, simply because that character is caught in such a grimly hilarious pattern of accepting her inevitable defeat at the hands of corporate and customer indifference. The sketches also do a nice job of showing how service employees are at the mercy both of overworked, unhappy managers and manipulative customers whose poor review of an interaction can end someone’s employment. The jokes are often crude but rarely aimless, and How May I Hate You?’s brash energy and committed cast make for a snappy sixty minutes in Hell.

Starry Notions (B+)
Ryan G. Hinds is a Fringe institution who I am sad to say I had never before seen in performance, and who is currently offering up a very enjoyable and at times moving sixty-minute set at the Annex Theatre. Having performed with Debbie Reynolds, Sky Gilbert, and Liza Minnelli, Hinds has an experience and presence developed from hoofing it around North America. This particular performance is made up of ten songs interspersed with personal anecdotes and some fun improvisations when opportunity allows (an audience member was brought up onto the stage to talk about the Fringe show (Big Love) he was appearing in, and quickly thrown off again when he revealed that it was taking place in the same theatre as Starry Notions). In the tradition of great cabaret stars of yore, Hinds appears to be deliriously exhausted before the performance has even really begun, splashing down the Annex stairs to join musicians Mark Selby (piano), Julian “Fatsound” Clarke (percussion) and Jeff Deegan (bass). The acoustics of the Annex theatre are not the best for mic’d singing, at least from where I was sitting, and Hinds did sound a tad fatigued vocally, but his vibrancy and unique charisma went undiminished throughout. His selection of ten songs cover the expected musical theatre back catalogue, including a beautifully rendered “The Origin of Love” from Hedwig and the Angry Inch, a part of which he delivered to a single audience member while maintaining (indeed, increasing) the energy and emotion of the song. We also get some Evita, some Steven Tyler, even some Carmen. His concluding anecdote is an ultimately tragic one that affirms the need for support of outsiders and acceptance of self-expression, to which the show, with its songs about owning your image and dreaming big, more than lives up.

Hey! Good Lookin’! (B)
Another in a series of two-person shows written by their stars, Hey! Good Lookin’ is low-key but charming look at the relationship between two estranged sisters who reunite under strained circumstances. Angela (Jillian Rees-Brown) is an apparently successful stage actor who abandons a matinee to fly home to be with Mary (Jorie Morrow), whom she has seen little of in the last few years, after their mother suffers a stroke. Mary lives within walking distance of their mother and so has essentially been her care-taker, while Angela has been living a live of comparative glamour and fulfillment. It’s no surprise then that resentments and revelations follow fast upon their reunion, though in general both their frustrations and discoveries (Mary’s feeling abandoned while looking after their mother, Angela’s hatred of her family’s history of alcoholism and realization that a revered aunt was actually not an aunt at all) are played off with a fairly low degree of sensationalism. Both Morrow and Rees-Brown have wonderfully natural and experienced stage presences (though Morrow has an odd habit of often looking out into the audience while delivering her lines, which partly makes sense because that is the direction in which their mother’s private room is located, but which also proved at times distracting). Each also gets a chance to show off their range, with one or the other sister always finding an excuse to leave the room so the actor can come back in the role of a nurse, or an imagined relative (though Rees-Brown is tasked with doing much more of this this than Morrow, who only switches roles once, early on). The play quietly marches through its story and then ends quite abruptly, with only a vague sense of some resolution having been reached. An unnatural conclusion should obviously not a requirement of any story, but the suddenness of this particular work’s ending doesn’t really cohere with the modest but fairly conventional play by which it has been preceded.

Two Girls, One Corpse (B-)
Sustaining the energy of a comic situation for longer than a couple of minutes can be a real challenge, which is what the sometimes charming but fairly thin Two Girls, One Corpse struggles to do. Like The Real Housewives of Murder, the play revolves around two close friends who are convinced that they’ve accidentally taken part in a murder, and their frantic attempts to find out what happened and cover it up, exploring the dynamics of their relationship in the process. Whereas the former play could depend on its sketch comedy foundations and reality-show satire to spiral off into a series of outrageous jokes and isolated gags, Two Girls is more committed to grounding its story in a quasi-realistic scenario that depends on the affection these two best friends have for one another. This works in sections of the play, especially early on, with Michelle Blanchard and Marissa Caldwell (the play’s stars and co-authors) creating a comfortable, lived-in energy between the two as they prepare for a friend’s wedding (which itself is depicted with deadly accuracy as a bare staged event featuring obnoxious strobe lighting, set to the kind of playlist interchangeable with any celebratory event). It’s when they wake up, hung-over and with little memory of the night before, to find a body lying in one of their beds, that things get a little shakier.

Blanchard and Caldwell have a difficult time balancing the comic momentum of the premise and the more grounded dynamic of the protagonists’ friendship. The crux of the play is about being a hot mess in your mid-twenties and worrying about your future, which, though ever-pertinent, has gotten a lot of stage-time and air-time at this point. Still, it’s a theme that both actors are able to wring some recognizable laughs out of (their respective Netflix addictions lead to them trying and failing to adopt various TV detective personas, like Jessica Fletcher and Veronica Mars). And the play’s final revelation about what actually happened the night before slyly touches on how often it’s young women whose quarter-life crises are played up as an embarrassment, while young men are a little freer to “find themselves” while also blithely identifying their female friends’ many problems, as happens here. Blanchard and Caldwell also have an endearing chemistry that often sells their panic, of both the existential and we-might-be-murderers kind. But while both actors have some solid moments, the energy too often falters when it should be flying, and too many comic moments don’t land with enough verve. Also, even for the purposes of a comic scenario about inept detective work, the investigative skills of both friends are distractingly awful. In its attempt to bridge farce with an affectionate depiction of a friendship, the play definitely has its moments – – it just needs to sharpen many of of the others.