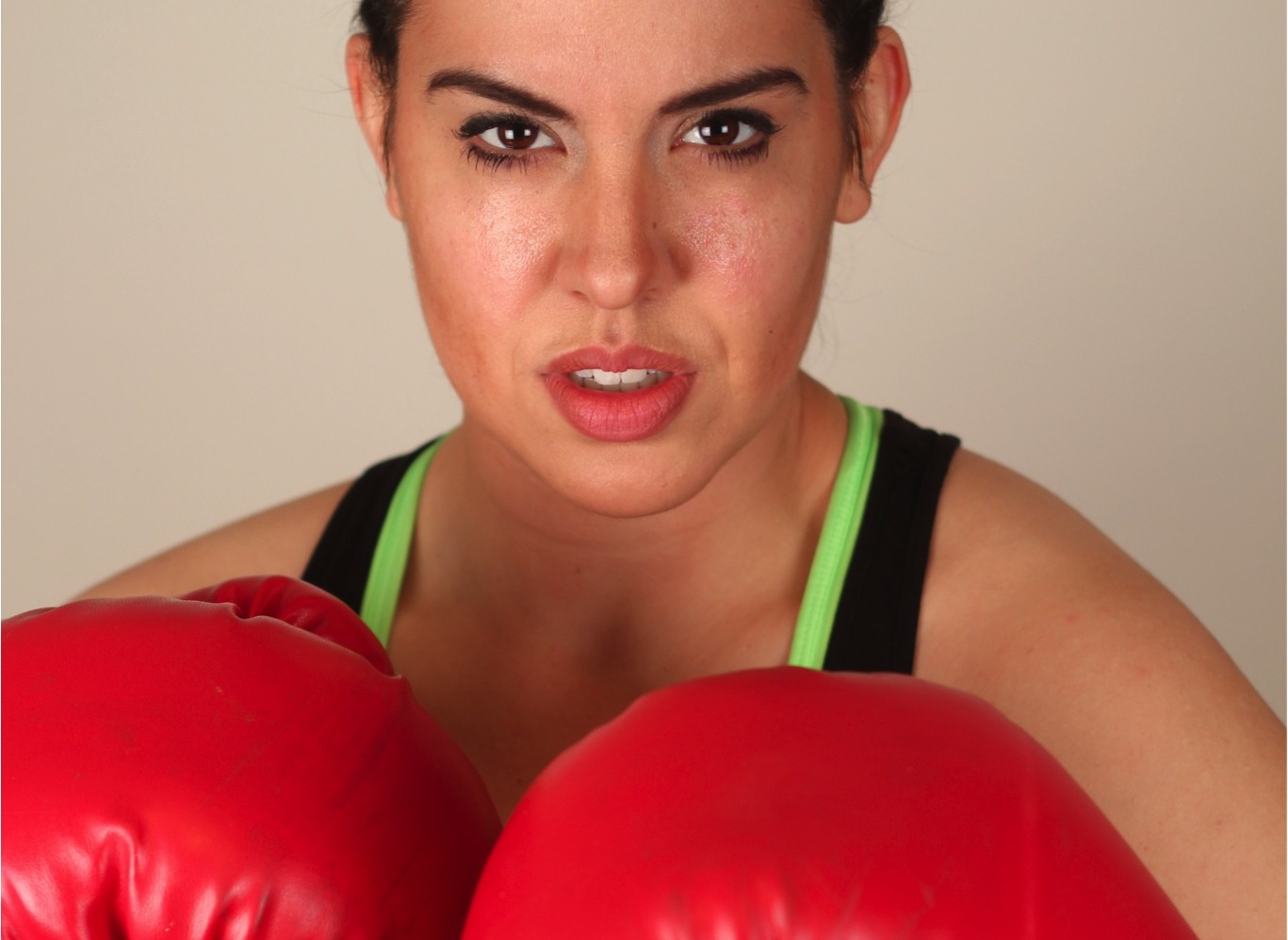 Bout (B+)
Sully’s Gym at Dupont and Dufferin serves as the setting for this two-hander about a coach and his determined boxing apprentice, written and directed by lead Stephanie Carpanini, in collaboration with her co-star Matthew Gouveia. Jackie (Carpanini) is a struggling actor who has taken up boxing to strengthen her body and her resolve, with the help of affectionate but straight-talking Manny (Gouveia), who puts her through the emotional and physical ringer while, naturally, contending with demons of his own. I’m about as likely to be seen in a boxing gym as Sylvester Stallone is to be seen at Fly on a Friday night during Pride Week, but that’s what makes the experience of watching Bout’s more physical sequences such a viscerally engaging one. Carpanini and Gouveia’s training sequences drop us into the routine of their characters’ sessions together, and are rigorously played out around the entire space of the gym, meaning that no matter where you happen to be seated (the fairly limited seating covers three sides of the ring), you are guaranteed to witness one of the many high-energy aspects of Jackie’s workout regime up close. The combined determination and exhaustion of both Carpanini and Gouveia- which are part and parcel of transforming into a stronger boxer (and artist and friend and person and so on, as the play makes clear)- radiate out onto the audience, with both actors (along with Chelsea Ferrando in an introductory fight with Carpanini) executing Nate Bitton’s strong fight choreography adroitly.

The aspect of the plot dealing with Jackie’s parallel career as a struggling actor sometimes feels a little stitched onto the boxing material, though it allows for a clever shift early on from a vicious match to an awkward audition, with Gouviea switching seamlessly from his gruff, tough-love coach to a polite, disinterested casting agent. The characters also occasionally reenact scenes from famous boxing movies, and while it is fun to see Carpanini and Gouveia reenact Clint Eastwood and Hilary Swank’s introduction scene from Million Dollar Baby, these interludes feel more like attempts to better tie in the acting aspect of the plot, rather than an organic inclusion. The middle patch of the play also gets a tad repetitive as the push-pull between Jackie’s insecurity and Matty’s world-weary pragmatism is emphasized again and again with little sense of development. But neither of these qualms take much away from what is a galvanizing and heartening Fringe entry. Worth climbing the two flights of stairs.

The Real Housewives of Murder (B+)
The Bravo-inspired ladies of Vancouver may have failed to hold Canada’s attention, but there’s still hope for our nation’s wealthiest cocktail-throwers in the form of TwoSon’s Devon Henderson and Jacqueline Twomey’s Harper and Rina in this funny and brash (though slightly out-dated) spoof of the Real Housewives reality phenomenon. Harper and Rina are two stars of a Canadian version of the series (city unspecified, though probably Toronto) who, in the minutes leading up to a giddily anticipated tiki gala, inadvertently deliver a mortal wound upon Juan Carlos, one of the party’s hired servers. Just which of the two is actually responsible for the crime is “very unclear”, as they both reassure themselves repeatedly (the incident occurs during an introductory blackout), but the prospect of such a scandal destroying their reputations and ending their series sends both women into a tizzy of flurried introspection as they deconstruct their roles as “real housewives”. The resulting interplay has the two ping-ponging madly between questioning how they present themselves on the series, and playing up the very personas they’ve been trained to emphasize for the camera, which mostly involves hurling accusations, catch-phrases and, yes, cocktails at one another.“Toronto WASP” is a particular niche that the TV show has not to my knowledge exploited, but that seems to be what Second City grads Henderson and Twomey are playing here, and it’s a kind of pseudo-aristocratic energy that lends itself well to their hilariously anguished line-readings. “So the woman who tried to break up Ryan Gosling and Rachel McAdams suddenly has principles,” or “She catfishes widows just so she can feel alive!” or “I’m living in the now, while maintaining presence in the here,” (there are a lot of good lines) are all delivered with a kind of manic hauteur, and while it doesn’t really capture the exact energy of the series, it successfully spoofs the ridiculousness and vanity of the whole enterprise. At a relatively brief three-quarters of an hour, The Real Housewives of Murder is still probably five or ten minutes too long, with the apparent murder being forgotten about for a good portion of the running time, before everything deteriorates into an anti-climactic, vodka-soaked brawl. For the first thirty minutes however it is quick-footed and fun, and nicely spotlights Henderson and Twomey sharp comic presence, as well as their strong onstage chemistry.

You Are Not Alone (B)
Sexual self-discovery within a cloistered school setting is a noble dramatic tradition, and Kenneth Collins’ play is a decidedly light-hearted entry into the genre. It tells the story of four Catholic school students (three friends and one frenemy), all on the cusp of adulthood, accepting one another for who they are (the play basically ends with a group hug) while contending with the institutional prejudice of the Catholic school system and the authority figures to which it is connected. At St. Eustace Catholic School, Tom (Collins) is nervously trying to come to terms with his homosexuality, finding himself accidentally outed by his two closest friends, roommate Virgil (Jack Nerona) and Virgil’s girlfriend April (Madison Phyper) when Tom is caught in the midst of watching gay porn during the brief two-minute window that Virgil is supposed to be out of the room. April and Virgil are both immediately supportive, and indeed You Are Not Alone matches its title’s open-hearted earnestness with a fleet script and minimally designed production that is more concerned with exploring and ultimately affirming the supportive relationships portrayed by its quartet of young actors than going down the route of didactic tragedy, as is often common with this type of story.

This does mean that after the initial revelation of Tom’s homosexuality, the play wanders around a little, touching on potential teen pregnancy and some sweetly sad renditions of “Falling in Love With You”, and making a gobsmacking reference to tamagotchis in a story set in the twenty-first century. The closest thing to an onstage antagonist is Val (Haley Paitz, giving the biggest but most precisely pitched performance), whose actions as a result of being broken up with by Virgil and excluded from the group shift the story further towards issues of discrimination and faith-based shaming, ending the story in a place of uncertainty but with assurances of support and friendship maintained by the characters. Collins compensates for the occasional aimlessness by emphasizing the endearing interplay between the schoolmates, and by maintaining a quasi-fantastical tone throughout, inserting eccentric running gags (like a Siri who offers dry, detailed responses to personal questions) and directing the players (along with co-director Noah Melrose) to maintain a pantomime-like level of energy for most of the running time. This can be fun and endearing, or slightly grating, depending on your mileage, but the cast is charming throughout, and keeps the energy-level high.

there / GONE (B)
Another site specific show featuring a small and committed cast, there / GONE uses the cramped, vibrant Flashback Vintage store on Kensington Avenue to stage a strange and eerie story of familial loss and cross-continental self-discovery. The audience is lead around the shop as a man played by the quietly electric Michael Reinhart, perched atop a stepladder, recounts a Spalding Grey-esque story about a trip to Southeast Asia made by him in order to better understand his father and his father’s time fighting in Ho Chi Minh city (then Saigon) during the Vietnam war. This monologue is intercut with more explicitly theatrical moments featuring Reinhart along with an ethereal Thomas McKechnie as a mysterious figure in drag and cheery, group-managing Jenna Harris, the most memorable of which is the silent recreation of a relationship’s entire history, from first meeting to brutal end (Harris must be applauded for handing the couple key props from their life together with mesmerizing endurance and increasing speed). The connections between these characters becomes clearer as we reach the end, though the emphasis seems to be less on how the story ties together than in witnessing moments of communion and isolation shared between the cast of three and the audience, who is always only a few feet away from the players. Developed by the cast and crew as apart of the [elephants] collective, the work’s focus is on how material objects, including the slightly cheap or used knick knacks (mostly clothing and jewelry) that populate Flashback, mark the place of a loved one who is in some way absent, or unknowable. Without giving too much away about how the hour unfolds, it is safe to say that the audience is given a few chances to interact with some of these objects, as well as the cast, though never in a truly barrier-breaking or particularly intense way (depending on your attitude towards impromptu wedding congas). Still, the intimacy of the play mostly works, inspiring a calm but communal energy that keeps attention engaged even as the heat in the shop becomes noticeable or legs begin to cramp. You’ll leave the shop with a few questions and at least one new use for saran wrap.