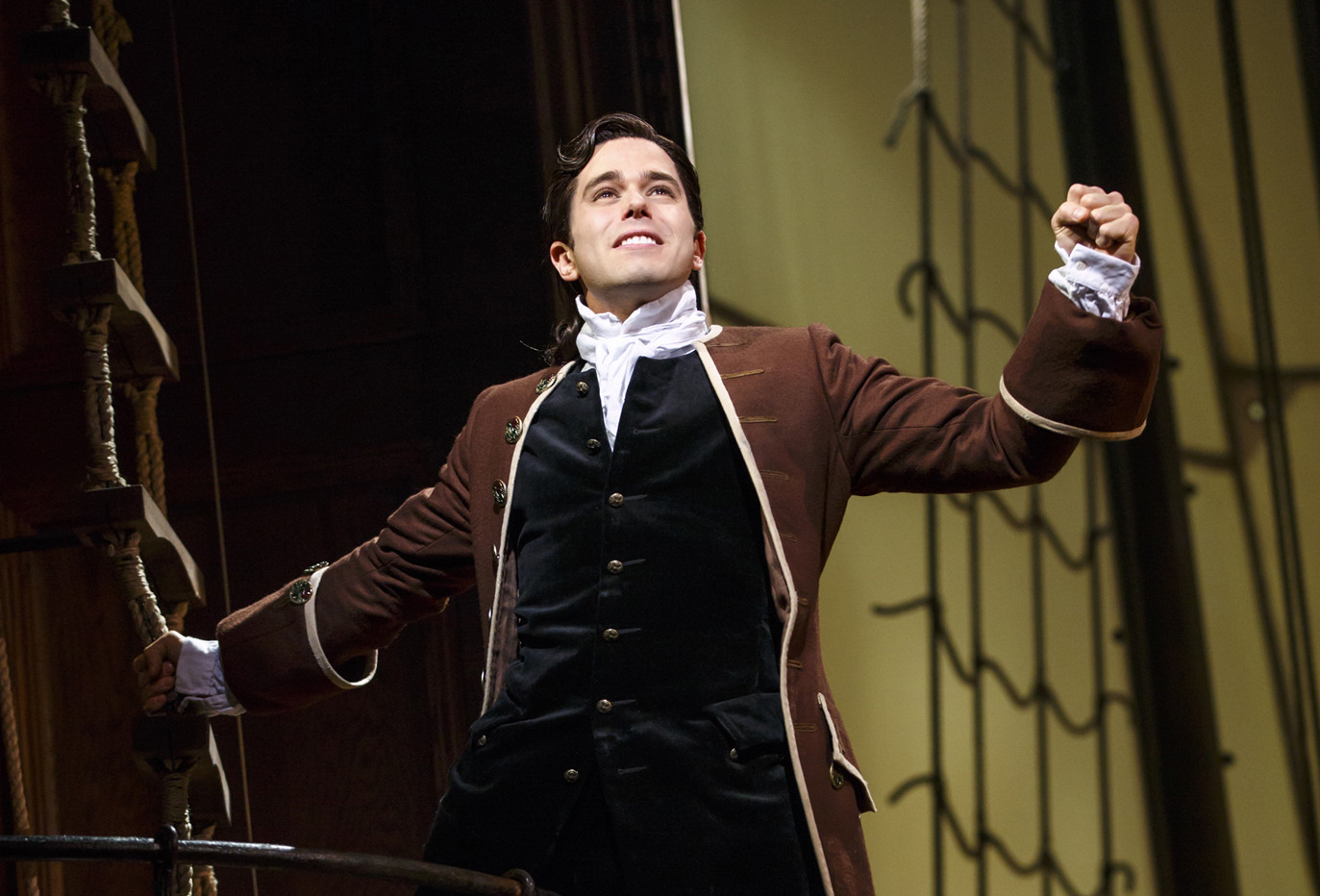 Christian or not, religious or not, chances are that you have probably heard the hymn Amazing Grace. A song of redemption, of rediscovery, of renewal, Amazing Grace is a poignant and powerful anthem, yet very few people know anything about the man who penned the hymn, John Newton, nor how he came to write such a song. Unfortunately, if you are looking for biographical accuracy, do not expect to find it in the new musical Amazing Grace, which purports to be based upon the “awe-inspiring true story behind the world’s most beloved song.” A musical with moving moments highlighting sobering and harsh truths about the slave trade, Amazing Grace hits a few gut-wrenching and beautiful high notes; however, its greatest failure lies in the book and score which too frequently reduce an otherwise intricate and worthwhile story into a glib caricature of a redemption tale.

Taking considerable liberties with Newton’s backstory,* Amazing Grace tells the story of one young man’s journey from vile slave trader to religious musician. Set in 1744, the show introduces John Newton (portrayed by Josh Young) as a belligerent young man and slave trader in England. While leading a slave auction, he and the strong-willed woman that he loves, Mary Catlett (portrayed by Erin Mackey), are confronted by a burgeoning abolitionist movement. While Mary is inspired to join the abolitionists after discovering the horrific truth behind the slave trade, Newton continues to drift through life picking fights with those around him and turning his back on God and his musical talents, both things that he shunned after his mother’s death. His boyish arrogance meets its match when he is forced into the British Navy and subsequently becomes enslaved by an African princess in Sierra Leone. After his father mounts a daring rescue, Newton finds himself once again confronted by hardship on the high seas – this time threatened by a powerful storm – but his boat miraculously avoids peril, and he is inspired to give up the slave trade and pursue his renewed faith in God.

Newton’s involvement in the British slave trade, including his role in William Wilberforce’s political campaign to abolish the trade,** is certainly a story worthy of a stage production, but the book by Christopher Smith and Arthur Giron is too cursory in its exploration of Newton’s life and takes too much license with historical fact, resulting in a trite tale. John Newton is a strikingly smug and generally detestable man who engages in numerous irreprehensible activities as a young adult, including deporting his long time slave and confidant, Thomas, to Barbados. As Newton admits in song, “there [is] nothing there to love.” Then it storms and KAPOW! – Newton sees the error of his ways, frees all of his slaves, sails to Barbados to find and free Thomas, and goes home to get married and take up the abolitionist cause.

And all it took was a severe thunderstorm warning.

If the plot sounds too far-fetched to be a true story that is because it is remarkably far from the truth. John Newton did experience a religious conversion; however, he continued to captain a slave ship for years after that conversion and only stopped for medical reasons. It was not until the end of his life that he began to regret his time in the slave trade – a part of his life that is not depicted in the musical. And, what of the play’s namesake song? Amazing Grace was written in 1772 – 28 years after the play is meant to take place. The musical heavily implies that Newton’s religious epiphany and change of heart with respect to the slave trade occurred simultaneously and somehow motivated the creation of Amazing Grace – that is false.

It takes a miracle to buy the redemption story in Amazing Grace, but it is a narrative that packs an emotional (if somewhat heavy-handed) punch and one that is like to appeal to religious audiences. Moreover, there are some compelling, if brief, scenes scattered throughout the highly idealized and synthetic-feeling plot. For example, in a rare moment of authenticity, Thomas openly refuses to forgive Newton’s numerous and indefensible transgressions, including stripping Thomas of his identity as a fellow man. Additionally, there are many depictions of the brutality of slavery, which, while difficult to watch, are important reminders of not only a bleak period in our history but also of the social and political work that must still be done to address racial divides.

In addition to penning the book, Christopher Smith also wrote the music and lyrics for Amazing Grace. Simple and formulaic, Smith’s forgettable score fails to stir much emotion, and many of the numbers sound remarkably similar. Although hardly unique, the transformation song “Testimony” and the love ballad “Nothing There to Love” are enjoyable.

Despite the mediocre material, the creative team for Amazing Grace has designed a visually striking show. As lighting designers, Ken Billington and Paul Miller showcase their dazzling technical skill, giving life to everything from fight sequences and storms, to silhouetted dances and monologues. Adding to the strong production value are Jon Westin’s sharp sound design, Eugene Lee and Edward Pierce’s swashbuckling set, and Toni-Leslie James’ lush period costume design. Interestingly, this is the first musical that I have seen without an intermission musical number. Rather, Act I concludes with Thomas rescuing Newton from drowning. Unfortunately, what starts out as a visually striking sequence directed by Gabriel Barre lasts too long and veers dangerously close to “cheesy” territory as a visual effect.

Cast highlights include Erin Mackey as the operatic Mary, who is as feisty and fierce as anyone on stage but also a believable upper class and intelligent woman of the time. Laiona Michelle’s performance as Nanna is gritty, powerful, and moving, and both she and Chuck Cooper are anchors of the production. In fact, Cooper brings such grounded humanity and soul to his performance that it is difficult to look away when he is on stage. The same cannot be said for Josh Young’s performance as John Newton. Despite portraying both Che in Evita and Judas in Jesus Christ Superstar, Young remains a rather weak leading man. His vocals are generally solid but his performance is restrained and his emotions often appear artificial.

Although the premise is promising, Amazing Grace falls short as a musical both in narrative and in melody. Themes of redemption, forgiveness, depravity, and inhumanity converge as audiences are force-fed emotions to be felt and thoughts to be had. While there may be an audience that will enjoy both the story and the spectacle that Amazing Grace has to offer, the same profound themes have been better explored in countless other theatrical works in a far more thought-provoking way.

*Unfortunately for the creative team behind Amazing Grace, I became somewhat knowledgeable on this topic after spending considerable time researching the William Wilberforce Trafficking Victims Protection Reauthorization Act of 2008, which is named after noted British abolitionist William Wilberforce (a religious politician who, as it so happens, found a mentor in John Newton). Several biographies about both Wilberforce and Newton sit upon my bookshelf.

**The slave trade was not abolished until 1807.