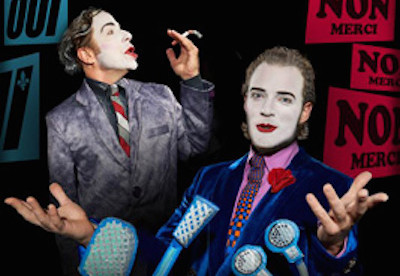 On Stage in TO: White Makeup

The use of white makeup as a base for exaggerated features has become a fairly standard practice in productions with a sense of heightened reality. This month in Toronto there are three shows all making use of the convention, albeit in wildly different ways.

Trudeau & Levesque
Their distinctive makeup is arguably the most defining element of the strong Video Cabaret brand. With their colouring standardized and facial features strategically obscured or exaggerated, the 7-person ensemble becomes a set of mostly uniform canvases onto which distinguishing costumes and wigs are draped to denote character changes, to the point where a VideoCab actor is remarkably hard to recognize off stage. Save leading man Mac Fyfe, who remains his iconically smarmy Pierre Trudeau throughout, each of the performers takes on multiple roles, changing up accents and mannerisms with remarkable ease to paint a picture of a given time in Canadian history. Characters in the current show playing in association with Soulpepper at the Young Centre include René Lévesque (a spot-on Richard Alan Campbell) and the hilariously doubled Maggie Trudeau (a shameless hippie) and Jean Chrétien (a hopeless hanger-on) played by standout Aurora Browne. As usual with the Trudeau plays, the show is stolen by Fyfe, or rather not stolen because it always belonged to him. Beyond the larger-than-life VideoCab schtick (a thrill the first time you see it, a mild interest from there on out) Fyfe’s Trudeau over the course of multiple runs of multiple plays has become a nuanced commentary that melds impersonation with carefully deployed glimpses of true humanity, an insightful portrait with blackened eyebrows and bright red lips.

Morro & Jasp: 9 to 5
One of the fun things about a new show from beloved clown duo of Heather Marie Annis’ innocently reckless Morro and Amy Lee’s hapless control freak Jasp is the way they incorporate their signature clown looks into their chosen setting (light white makeup and round blobs of bright blush included). For their foray into the workplace, Jasp has adorably added a little blue tie to her usual dress as she embarks on her new role as President & CEO of JMI Industries (“Jasp & Morro Industries Industries, where the future is tomorrow”). Morro’s red coveralls, meanwhile, become a symbol of her low status as a worker bee in Jasp’s not-so-well-oiled empire. A few bawdy jokes feel out of place and at times the impressive tech starts to distract from the sincerity and connection at the centre of what Morro and Jasp are all about (and I didn’t love the really high audience participation level or the gross-out gags, though that’s a matter of taste) but the trademark physical humour, clever character-based storytelling and gigantic heart are all fully in tact in the clown sisters’ latest adventure.

Half a League
Rarely Pure Theatre’s latest production is (I’m pretty sure) their first that doesn’t feature one of the three core company members- Monique Renaud, Christina Bryson and Spencer Robson. The program includes a note from Artistic Director Robson talking about the value of auditions and bringing in new talent because it was through auditions that they cast Scott Garland in their fantastic As You Like It last winter and thus were introduced to his work as a playwright, which they’ve now chosen to mount in the form of the absurdist high-stakes children’s game Half a League. The drawback of committing to new talent is that it’s unproven and, when you’re lucky enough to have excellent performers as the key players in your company, it seems a shame not to use them. In the case of Half a League, this is particularly glaring as none of the four speaking cast members are really up to the challenge of carrying Garland’s strange text and unexplained mythology (there’s a lot of false kid bravado and awkward line readings). The one performer who does more than muddle through the words is Victor Pokinko who stands largely removed from the action on stage right, in disheveled swanky dress and smeared with the eerie metaphor of dehumanizing white makeup. He plays the guitar (Pokinko composed original music for the play) and sings into a mic only to have his voice distorted into a strange punk rock monsterous growl. He tells us “I am Sir Rupert” but he has more symbolism than identity, symbolism that, it turns out, doesn’t even really belong to him. At one point Sir Rupert begins to interfere with the main story of children playing war but, being mostly silent, he thinks he needs to gesture to draw our attention away from whatever’s happening downstage. He needn’t bother; there isn’t a single moment of Half a League when I was tempted to put my attention on anyone but him.