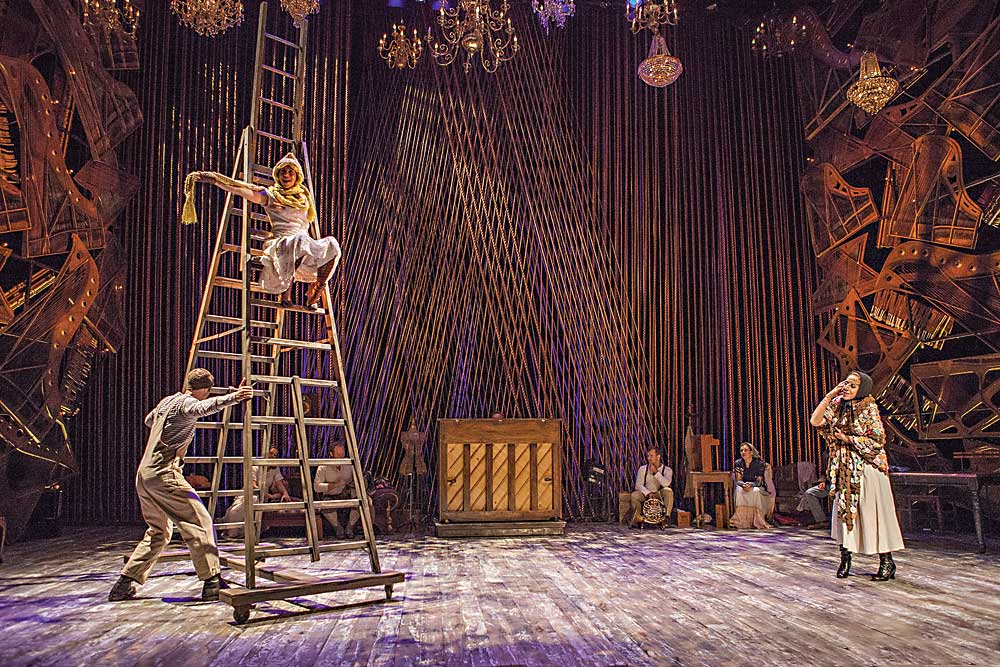 Into the Woods Off-Broadway: After “Ever After”

“Into the woods you go again, you have every now and then.” If you have never been Into the Woods, now is the time. Between Hollywood’s adaptation of this beloved musical, the availability of the original Broadway cast production on Netflix, and stage productions of Stephen Sondheim’s best work popping up across the country, there are numerous ways to experience Into the Woods. Roundabout Theatre Company has welcomed a re-imagined version of Into The Woods to the Laura Pels Theatre off-Broadway, which is distinct from other currently available Woods productions. After taking in a late night showing of Disney’s movie version of Into the Woods (and spending substantial time dissecting and lamenting the final product), I headed back Into the Woods at the Laura Pels theatre the next day. Seeing the movie and stage production back to back was ideal – it clarified for me my unease with the movie, which failed to adequately convey both the whimsy and the turmoil of the show.

For those who are unfamiliar with this Stephen Sondheim classic, Into the Woods is the collision of several fairy tales in the “woods,” which is a dangerous and uncomfortable space that one must traverse to make dreams come true – dreams that often have unintended consequences. Cinderella goes into the woods to find her prince, the Baker and his wife go into the woods to reverse the witch’s curse and have a child, Jack goes into the woods to sell his cow and to support his starving family, and Little Red Riding Hood skips into the woods to visit granny. They all meet their goals; attain their dreams; live happily ever after! The end. Or, rather, intermission. As we all know, life does not cease when goals are reached, every action has consequences, and new goals must be set. Act II joins these fractured fairy-tale characters as they once again travel into the woods – this time, they may not all make it out.

Sondheim’s music is much celebrated in musical theatre circles. He writes music that performers want to sing, but, with his challenging and grandiose melodies, he is also, admittedly, something of an acquired taste. Sondheim finds ways to beautifully integrate song and story, which is rare in musicals today that rely on loud, full-chorus numbers with intricate dance routines to keep the audience entertained (while, at the same time, halting the forward progress of the story).

Of course, Sondheim’s form of story-telling relies on the listener taking in the whole narrative as written – when his songs are removed or edited, as they were in the movie, the tale becomes less coherent and the story changes in both tone and focus. For example, the 11th hour duet between father and son, “No More,” is my favorite song from the musical. With its introspective narrative and humble, almost subdued melody, “No More” beautifully captures the desire for normality and stability in a dangerous, ever-changing and ever-challenging world – a longing to return to a simpler time. It is an identifiable theme and one that the Baker grapples with throughout Into the Woods; yet, the song was cut from the movie (although the melody still plays in the background). Thankfully, Roundabout’s production includes “No More” and the entire score of Into the Woods – unabridged and unadulterated.

That said, while the movie version of Into the Woods banishes substantive songs in favor of a Disney-fied script, Roundabout’s production leaves Sondheim’s artful piece intact and manages to distinguish itself visually at the same time. Shunning traditional staging, the actors perform on a relatively bare stage with a piano and a limited collection of props and small set pieces that serve multiple purposes throughout the show. This creative decision is actually rather brilliant because Into the Woods is, at its heart, a fairy tale, and this staging is reminiscent of traditional story telling. The actors could very easily be staging story time in a family living room or entertaining kids at a library. Rather than undertaking elaborate costume and make-up changes, the actors in Roundabout’s production may change from one character to another by donning some curtains to use as a dress and adopting a higher pitch voice – techniques that any person who has read a story to a young child is familiar with. The staging pays homage to the roots of Into the Woods in a way that the movie neglects entirely, and the result is fabulous. Set Designer Derek McLane and Costume Designer Whitney Locher have constructed the building blocks for a fantastical make-believe world.

The Woods ensemble has great energy on stage and they appear to have fun bringing multiple characters to life with limited means. Of particular note are Ben Steinfeld, who aptly portrays the unassuming and sympathetic Baker and has a wonderful voice, Jennifer Mudge as the questionably evil (but certainly vain) Witch, and Emily Young who is the first actress portraying Little Red Ridinghood that did not make me despise the character – her portrayal is less one of a spoiled brat and more one of a growing, tenacious young woman. Andy Grotelueschen also deserves accolades for his varying portrayals of minor characters like Rapunzel’s Prince, evil stepsister Florinda, and the hilarious “cow” Milky White. These are roles that are easily overlooked, but Grotelueschen’s comedic timing is so spot-on that he frequently stole the spotlight. The greatest downfall of the ensemble is the inconsistency in vocalists. Sondheim’s music is difficult, but it does not necessarily require a perfect vocalist to sing it – his music is about character. However, Noah Brody, who portrayed multiple roles including Cinderella’s Prince, and Emily Young both were noticeably pitchy at times, which is not a problem often seen in NYC theatre.

Bottom line – if you are looking for a nontraditional theatre experience that is perfect for the entire family, Into the Woods at Roundabout is worth a night out. This production will remind theatregoers why there is so much love for Sondheim and his classic altered fairy tale, but the refreshing, re-imagined staging differentiates this production from so many others and, for those who are only familiar with the movie, this production is the perfect introduction to a Sondheim classic.