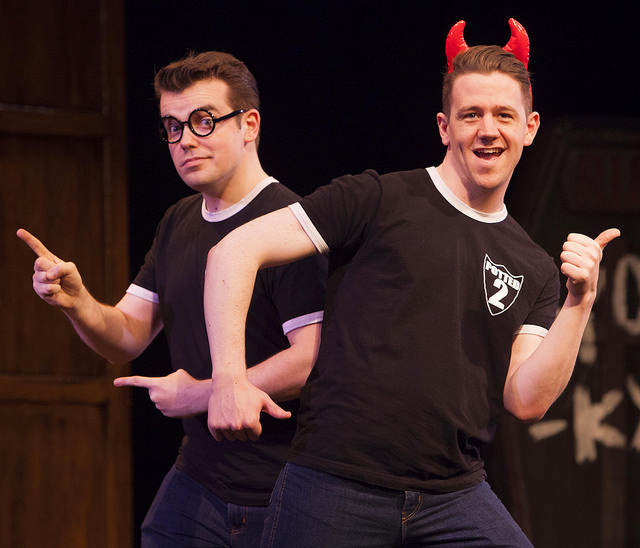 On Stage in TO: Childish Fun

Potted Potter (Starvox Entertainment/Potted Productions)
In the second international tour of this two-man 70-minute reverential romp, creator/performers Dan & Jeff (Clarkson & Turner) are replaced by Ben & James (Stratton & Percy), who are essentially playing Dan & Jeff but are wisely called Ben & James. The new guys are plenty loveable and plenty enthusiastic but some of the, ahem, magic is gone in the absence of the creators and the “this is just a little fringe show, a labour of love” vibe they brought with them. In fact, much of Potted Potter‘s giddy gleam is diminished by a second viewing with new jokes written in to be more timely and location-specific (a Rob Ford joke? Really?). Most disappointing is the revelation of the secret scripted-ness of many of the play’s charming “unscripted” moments (though whatever spontaneous fun is derived from the audience-participation Quidditch match is obviously, at least, genuine). Potted Potter really doesn’t stand up to a second go-around but, if you’ve never seen it before, by all means READ THIS then go because it’s all sorts of heart-warming, Potter-loving, simple, spirited fun.

The Dog & The Angel (Theatre Columbus)
Evergreen Brick Works is a visually entrancing space, like walking into another world and another era and another state of mind all at once. It’s dark and cool and calm, big and full and empty and stark and colourful and all sorts of wonderful things worth wandering through. It’s somewhat disappointing, then, to see it play home to a theatre piece less inspiring than the space itself. Theatre Columbus’ site-specific winter show is conceptually intriguing, reframing a summer tradition in a winter context, sending the audience on a literal journey with the characters, serenaded by adorably enthusiastic local choirs along the way. The trouble is, simply, Martha Ross’ play The Dog & The Angel, the piece at the heart of this year’s Brick Works winter adventure. The broad simplicity and heavy-handed moral of the story seem to suggest that the play is intended for a young audience, but it meanders too much to reliably hold the attention of kids, especially when the space offers so many fun (but also potentially dangerous?) distractions. It’s hard to invest in the neurotic Rozel and her quest to retrieve a broken angel ornament her restless husband Barker threw out. Her parents are sweet in their devotion to each other but they serve almost no story purpose while Rozel and Barker’s daughter theoretically carries the emotional throughline by trying to save their dying dog (which mostly consists of crying and hoping he’s not dead yet). The ending is sweet but, really, The Dog & The Angel is best appreciated as a neat tour of the Evergreen Brick Works.