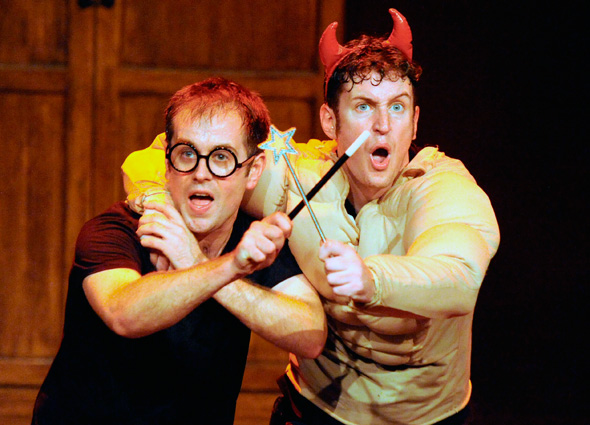 I had the best Valentine’s Day ever! Because I got to spend it with Dan & Jeff* and Harry Potter. What started as an Edinburgh Fringe show has brought the utterly hilarious duo of Daniel Clarkson and Jefferson Turner to Toronto as the two parts of the most smile-inducing production I’ve seen in years. I’m not usually one for broad, Monty Python-esque absurdity but even my grumpy, sarcastic ways were brought easily down by Potted Potter.

It’s housed by Mirvish at the Panasonic Theatre, so the tickets cost a pretty penny, and the show clocks in at only about 70 minutes, but the way my cheek muscles hurt from grinning too much, I’d say it’s worth it. You walk into the theatre and are greeted by ushers in Hogwarts robes distributing keepsake Potter glasses and scrolls that serve as programs. If the awesomeness of this greeting is lost on you, you are the wrong demographic for this show and should turn around now- do not progress past the lobby. This is a Potter-lovers only affair; those mule-headed folk who still think the global phenomenon is “silly”, “a waste of time” or *gasp* “just for kids” don’t deserve seats at the popular show (where one ticket is always left available, in case JK Rowling decides to come by). Though  the premise is basically to recap all 7 books in 70 minutes, they do a just-bad-enough job to confuse anyone who doesn’t know the plots already and a just-good-enough job to spoil them for any of the skeptics who might eventually have caved and read the books- so, no Potter newbies or Potter-phobics, just the other 90% of the population is allowed.

What I mean by “just-bad-enough” is that Dan (the goofy, outgoing, fun one who spends the pre-show wandering the audience and introducing himself) spends the whole show screwing up the plans Jeff (the awkward, scrawny, intellectual one who spends the pre-show reading the Deathly Hallows) has to present the stories in a comprehensible manner with the budget distributed evenly across many spectacles. As Jeff sweetly and nerdily bumbles through his storytelling in the role of the boy wizard, Dan has great fun playing everyone else (including a super-cockney Ron, Voldemort with bright red devil horns and Hagrid with a Scottish accent he “picked up from watching Shrek”) and acting out key scenes using cheap puppets as major creatures (because he supposedly blew the whole budget on the dragon from book 4- which also turns out to be a puppet).

The highlights of the show include an audio-visual presentation on the all-too-essential plot of book 3 and a raucous audience-included game of quidditch Jeff begrudgingly agrees to after Dan nags him for half the show. Basically, they split the orchestra level in two (you want to sit in the orchestra level, the balcony just gets to be the “cheering section”), Slytherin and Gryffindor (I won’t tell you which is which, you’ll have to take your chances), and reveal two rings on either side of the theatre- one in each of the team colours; you are now a chaser. Dan (who is the referee because Jeff insisted on getting “the important job”, without realizing what that would be) then throws a beach ball into the audience and you’re left to bat it back and forth until someone scores- which no one will. So, as usual, the game of quidditch comes down to the seekers- two kids chosen from the audience to chase Jeff around the stage until he’s caught (the “important job” he volunteered for turns out to be dressing up in a giant golden snitch costume and “flying” around the stage only to be tackled by children). On Valentine’s Day (at the 9pm performance, so this is at least a little understandable), Dan had a small moment of panic because there weren’t many kids, so he picked one kid and a young woman in high heels who looked like she would probably let the kid win- until she took a dive right at Jeff, bringing him crashing to the floor before the kid could even move. This brought about peels of laughter from both the performers, the unexpected being one of the most fun aspects of the show.

It’s the unscripted mistakes and moments of random inspiration that keep the show brimming with fun, instead of practiced comic gestures- the temperature in the theatre messed up a cake gag and Dan ended up with chocolate smeared all over his face, a flat joke was saved by a deadpan “okay, so that one doesn’t translate in Canada, good to know” and some untested stage business from Dan prompted a hilariously surprised “you’ve never done that before!” from Jeff as he tried not to break down in laughter. Their ability to roll with the punches is what makes Dan and Jeff amazing performers in such a silly show. They’re having so much fun, it’s impossible not to get swept into their charming enthusiasm. You’ll leave loving them, loving the show, and most likely loving Potter even more than you already did.

*Dear silly girls- “Dan & Jeff” translates to cute and talented boys with pretty accents who are really into Harry Potter, just so you know.