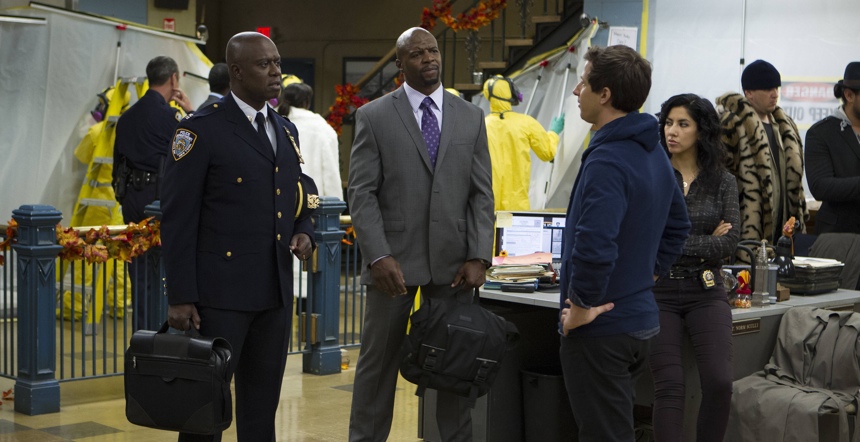 Brooklyn Nine Nine (FOX)
After binge-watching this comedy series over the summer, I eagerly awaited the second season. It did not disappoint. The characters are zany without being obnoxious. The strong ensemble cast was only enhanced by some brilliant guest stars (including Kyra Sedgwick, perfectly cast as Captain Holt’s nemesis). There wasn’t an episode so far this season that didn’t have at least one laugh-out loud moment.

The Flash (The CW)
This was the strongest live-action superhero TV show in a good long while. Barry Allen (Grant Gustin), the very definition of adorkable is a delightful lead. And The Flash is refreshingly light-hearted, especially when compared other offerings of the superhero genre of late. (Which don’t get me wrong, I also love. But it’s nice to switch up the pace once in a while). Of course there’s some angst, and some general shadiness going on (looking at you, Dr. Wells). But for the most part, The Flash is good old-fashioned fun, balancing the heavier moments with a lot of humor, banter. And yeah. Classic superhero fight scenes.

Game of Thrones (HBO)
Traditionally in Game of Thrones, episode 9 is the part in the season where something that changes the game occurs: Ned Stark’s execution, the Battle of the Blackwater, the Red Wedding. The other episodes didn’t always have consistent pacing – sometimes they dragged on a little. In the latest Game of Thrones season, each episode had an ‘episode 9’ momentum. There were some eyebrow raising changes from source material, but for the most part, season 4 was solidly entertaining.

Hannibal (NBC)
Bryan Fuller’s twisted drama is the most visually innovative and stunning show on TV. Every episode is like watching a macabre nightmare realized. It’s beautiful, it’s horrifying, and it’s unlike anything else on TV. The poetic dialogue and the gorgeous visuals are a stark contrast to the brutality, violence, and dark characters. The cast is amazing and makes you invested in characters even when they’re being morally reprehensible. The second season was full of twists and turns, and I’m still not sure exactly what happened in the finale, but I can’t wait to find out what happens in Season 3.

In the Flesh (BBC3)
I was a little late to the game with this dreary zombie drama, having only heard of it after it aired its second season earlier this year. (Note: although only season 2 aired this year, I watched both seasons in one day. As such, this is a reflection of season 1 and 2). The zombie genre has enjoyed a revival of late, but rather than focusing on guts and gore (though there is a bit of that) In the Flesh offers quiet insight into how society would react if there was suddenly a cure for zombies. The show follows rehabilitated Kieran Walker (played by the excellent Luke Newberry) as he tries to reintegrate himself with his family and community. The Walker family’s drama is enough to fuel an entire show. Kieran’s return is made more uncomfortable by the fact that he originally died by committing suicide. His sister’s stint as a zombie hunter doesn’t help matters. Outside the familial drama, the overwhelming narrow-mindedness and hostility of the small town towards the Partially Deceased Syndrome sufferers can easily be a metaphor for many social issues facing stigmatized minorities today. The complex beliefs developed by pro and anti zombie sides make the show’s mythology rich, and the layered relationships between the complicated characters makes In the Flesh well worth a watch.

The Mindy Project (FOX)
Sometimes when a will they/won’t they couple gets together, it can throw off the entire dynamic of a show. In The Mindy Project’s case, Mindy and Danny getting together only made it more fun.

Outlander (Starz)
Beautiful, dramatic, romantic. Starz’s time-travelling new series features one of the more unique plots currently on air. Outlander is a historical adventure with a complicated love triangle and intriguing characters. The gorgeous cinematography will make you want to pack your bags and go on a holiday to Scotland right away. Though preferably not to the 1700s. Life in Scotland was not the greatest then, although it makes for excellent television.

Parks and Recreation (NBC)
I don’t know if objectively this show was one of the best of the year, because I’m too biased. Parks and Rec is one of the rare comedies on TV today that shows good things happening to good people, and it makes it easy to get really invested in its characters. The show made some big changes this past season, and they worked. As the show gets ready for its final season, it’s hard not to look at everything Parks and Rec related with nostalgia and overwhelming fondness for the inhabitants of Pawnee.

Selfie (ABC)
I had no intention of watching Selfie. I found its commercials condescending towards the millennial generation and was sure the show would have a ‘kids these days are ruining everything with technology’ message. Then Rachael’s reviews made me curious enough to watch the pilot. It took the second episode to convince me to keep watching, but once I did, Selfie became a weekly TV highlight.  Karen Gillan and John Cho have fantastic comedic timing, and together they had amazing chemistry. And the more we saw of their office life (especially Saperstein and Charmonique), the better. Alas, poor marketing and a regrettable title name may have doomed Selfie. All the good word of mouth it generated wasn’t enough to save it from cancellation.

Vikings (History)
Building on a strong first year, Vikings’ sophomore season showed it wasn’t a one-hit wonder. The attention to detail and grandeur in the costumes, sets, and scenery make this a feast for the eyes. And while based in history and historical legends, the characters feel very real. Humanizing a group of people of brutal people living in an even more brutal world is no easy task, but Vikings  more than manages.