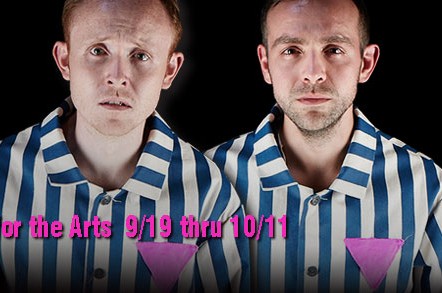 We’re back in full swing in Boston with many of the most popular theatre companies in town presenting their first production of the 2014-2015 Season.  Here at My Theatre (Boston), we’re excited for the prospect of new, innovative, and challenging works after a lazy summer of summer stock favorites. We have new and classic musicals, challenging plays and familiar favorites.

This month’s Must See list lacks any noticeable trends; Sweeney Todd is about as different as you get from Guess Who’s Coming to Dinner.  However, all of the works tend to take a more serious bent, even the musicals. The overarching theme seems to be the return of the high-quality actors.  From familiar Boston favorites like Kerry Dowling, Will McGarrahan, and Aimee Doherty in SpeakEasy Stage Company’s Far From Heaven; to rising talent like Victor Shopov and Brooks Reeves in Zeitgeist Stage Company’s Bent; to the return of Amelia Broome and Christopher Chew as the deadly pair in The Lyric Stage Company of Boston’s Sweeney Todd; to consistently excellent community theatre actors in ACME Theatre’s God of Carnage; and finally to the TV and film stars Malcolm-Jamal Warner and Julia Duffy in Guess Who’s Coming to Dinner.

More than ever, this Must See showcases the many meaty roles available for actors in the Boston theatre scene.  Local companies have assembled dynamite casts to tell dark and tragic stories; their actors’ talents showcase the humanity underlying these stories.  Whether seeking revenge, finding love in the most unlikely of circumstances, or debating race and class with new friends and old family members, these stories inspire conversation and discussion.  Without the talented casts, these plays and musicals would not have the resonance beyond the page and onto the stage, into our hearts and minds.  So, here’s your job for September: stay at a stage door following one of these performances, and thank any of the talented actors, crew, designers, directors, and theatre staff for their time in orchestrating the live storytelling in one (or more) of these productions.

Let’s try something different.  Vote for your favorite character/actor in this month’s Must See production.  Don’t see your favorite listed?  Comment below with the actor and character’s names, and the theatre company with the name of the production.

SWEENEY TODD: THE DEMON BARBER OF FLEET STREET
Music & Lyrics by Stephen Sondheim
Book by Hugh Wheeler
Directed & Staged by Spiro Veloudos
Music Directed by Jonathan Goldberg
The Lyric Stage Company of Boston
140 Clarendon Street, Boston, MA 02116
About the Production
Buy Tickets
Sept. 5 – Oct. 11, 2014
After seeing last spring’s smash hit Into the Woodsat The Lyric Stage Company of Boston, I longed for another Sondheim treat to satisfy my hunger.  Thankfully, the same company is bringing “The Best Pies in London” to start their 2014-2015 Season.  Sweeney Todd: The Demon Barber of Fleet Street is aptly described as a musical thriller.  While other musicals continue to play with this genre, few others have perfected the thrill of a thirst for revenge and a hunger for satisfaction quite like Sondheim’s Sweeney Todd.  The score is sweeping and haunting, the humor is macabre, and the suspense is chilling and electric.  Returning from his unjust imprisonment, Sweeney Todd vows revenge on those who have done him wrong and, with the help of savvy businesswoman and confidante, Mrs. Lovett, Sweeney attempts to avenge his family and himself against the cast of London’s most morally degenerate.  But will Sweeney become like these vengeful men he seeks to destroy?  The Lyric’s cast is full of surprises; for instance, Christopher Chew is a Boston theatre regular and an accomplished performer, but I’m not sure he has the menace to portray Sweeney Todd, a man driven to desperate extremes for revenge.  Amelia Broome was fantastic in The Lyric’s Rich Girl last season, but will she match the enchantment brought by Dame Angela Lansbury as Mrs. Lovett?  Additional casting includes: Sam Simahk as Anthony Hope (who charmed as Rapunzel’s Prince in The Lyric’s Into the Woods); Phil Tayler as Tobias Ragg (from SpeakEasy’s Carrie); and Lisa Yuen as Beggar Woman (who won our hearts as The Baker’s Wife in The Lyric’s Into the Woods).  Hopefully this cast can bring 2013 My Theatre (Boston) Award NomineeSpiro Veloudos’ usual directorial magic to life in this most thrilling Sondheim treat; it could be deadly.

BENT
Written by Martin Sherman
Directed by David Miller
Zeitgeist Stage Company
Boston Center for the Arts
539 Tremont St., Boston, MA 02116
About the Production
Buy Tickets
Sept. 19 – Oct. 11, 2014
Zeitgeist Stage Company builds off of last year’s monumental success in The Normal Heart by returning to start their season with Bent, written by Martin Sherman.  Bent is an even more complicated and challenging piece, but, given Victor Shopov and Mikey DiLoreto’s returning talents and the additional success of Brooks Reeves, this play is in good hands.  David Miller returns to direct this piece in the Boston Center for the Arts; the intimate staging could be essential for this visceral play.  The play was revolutionary for its time; written in 1979, Bent opened the door to discussion about the Pink Triangles and the Nazi persecution of homosexuals in World War II concentration camps.  Another light-hearted comedy for Zeitgeist, huh?  However, the company’s compassion, keen eye for detail and precision, and excellent script study made The Normal Heart come alive last fall, including earning a 2013 My Theatre (Boston) Award for Best Actor in a Play for Shopov’s performance and numerous other award nominations.  The ultimate challenge is how to keep the play’s intensity without scaring away a willing audience.  However, I think this is the challenge for which Boston audiences are waiting with baited breath to see; I know I am.

FAR FROM HEAVEN (Boston Premiere)
Book by Richard Greenberg
Music by Scott Frankel
Lyrics by Michael Korie
Based on the Focus Features/Vulcan Productions Motion Picture Written & Directed by Todd Haynes
Directed by Scott Edmiston
SpeakEasy Stage Company
539 Tremont St., Boston, MA 02116
About the Production
Buy Tickets
Sept. 12 – Oct. 11, 2014
Far From Heaven is, at first blush, an odd choice for the SpeakEasy Stage Company; the reputable theatre company has garnered significant success by producing hot new musicals with instant audience appeal (Next to Normal, The Color Purple, and In the Heights come to mind most easily).  This new musical, based on the 2002 Todd Haynes film, opened Off-Broadway in June 2013 with limited success, despite the four-time Tony nominee Kelli Hara and Steven Pasquale displaying their ample talents.  The score by Tony Award-nominated Grey Gardens and (original) Finding Neverland songwriters Scott Frankel (music) and Michael Korie (lyrics) offers an intimate appeal to the musical.  However, I am most excited by the often-conflicted, always-timely Tony Award winning Richard Greenberg’s talent as book writer.  And then I saw the cast list.

SpeakEasy has secured some of the best musical theatre talent in Boston in a single production.  It is astonishing that, with two other musicals in professional Boston productions, SpeakEasy has such a stacked cast for this new musical with limited-appeal.  The musical follows a 1950s Connecticut suburban housewife, Cathy Whitaker, and her strained relationship with her husband Frank. It tackles timely concepts of sexuality, love, race, and class.  The movie featured Julianne Moore as Cathy (who was nominated for an Academy Award and Golden Globe Award for Best Actress in a Leading Role) and Dennis Quaid as Frank.  However, the musical received less-than-favorable reviews while Off-Broadway.  SpeakEasy may have a leg-up on Off-Broadway with the talents of director Scott Edmiston and his perfect storm cast, including Jennifer Ellis (I have yet to see her perform but I heard rave reviews of her Jacque Brel . . . at Gloucester Stage this past summer), Aimee Doherty (The Lyric’s Into the Woods), Kerry A. Dowling (SpeakEasy’s Next to Normal), Will McGarrahan (The Lyric’s Into the Woods), and Maurice Emmanuel Parent (The Lyric’s Into the Woods).  Each of these actors brings exceeding professional talent to the Boston theatre scene, and their performances in Far From Heaven could be divine.

GOD OF CARNAGE
Written by Yasmina Reza
Translated by Christopher Hampton
Directed by Michele Aguilon
ACME Theatre
61 Summer Street, Maynard, MA 01754
About the Production
Buy Tickets
Sept. 12 – Oct. 4, 2014
I don’t know if I’m ready for another God of Carnage.  After reviewing an excellent production a few seasons ago, I was quite content to let the play slip under my radar (and reviewing).  This past spring, Michele Aguilon impressed with her outstanding directorial style and aptitude with Hovey Player’s Rabbit Hole, and she has assembled a top-notch cast of local Boston actors for her newest project.  God of Carnage is a hot show for theatres because of its broad appeal to middle-aged theatre patrons, quirky script, and sexy topics ripe for post-show discussion among friends.  The play was also adapted into a decent 2011 film with Jodie Foster, John C. Reilly, Christoph Waltz, and Kate Winslet playing the two sets of parents.  The play begins as a civilized meeting among these adults to discuss a recent altercation between their sons on the playground, but the conversation quickly escalates to comic proportions.  The beauty of the play, however, is that the plot never drifts to total absurdity; the play is filled with real and loaded topics (including misogyny, racial prejudice, and homophobia) and situations (including a ridiculously entertaining mishap late in the show which I can’t possibly spoil—no cheating!).  While Maynard, Massachusetts may be a long drive for some theatregoers, Aguilon and her cast will likely make this production a much-talked-about treat.

GUESS WHO’S COMING TO DINNER
Written by Todd Kreidler
Based on the screenplay by William Rose
Directed by David Esbjornson
The Huntington Theatre Company
BU Theatre / Avenue of the Arts
264 Huntington Ave., Boston, MA 02115
About the Production
Buy Tickets
Sept. 5 – Oct. 5, 2014
The Huntington Theatre Company opens its 2014-2015 Season with this classic play adapted from the iconic 1967 American film.  The plot centers on the possible interracial marriage between Joanna (originally played by Katherine Houghton), a young upper-middle class woman with liberal parents, and Dr. John Wayde Prentice (played by Sidney Poitier), a successful widowed black physician.  Her politically-liberal parents (played by Katherine Hepburn and Spencer Tracy), along with John’s parents and a Catholic priest, create conflict in a sit-down dinner with the young fiancées.  The discussion about political and social perceptions of race and the true nature of love and commitment provide powerful drama and fuel for discussion.  This play is a spectacular choice, considering Boston’s persistent “race problem.”  The Huntington is wise to provide a timely look back at the 1960s and the anti-miscegenation laws as well as a forward-looking perspective on race, love, and society.  Perhaps they will also have allusions to the current same-sex marriage debates and struggles, while addressing our continued controversies regarding race and the law.

The Huntington’s production features Julia Duffy (Emmy Award-nominated for “Newhart”) as Christina Drayton, Will Lyman (from The Huntington’s All My Sons) as Matt Drayton, Meredith Forlenza as Joanna Drayton, and Malcolm-Jamal Warner (Emmy Award nominated for “The Cosby Show”) as Dr. John Prentice.  This mix of Boston and out-of-town talent should serve up a delicious dinner party for us to enjoy and discuss.  Do you think that for such a topical show that The Huntington should have cast all local actors, or do you appreciate the geographical diversity?  Comment below with your thoughts!