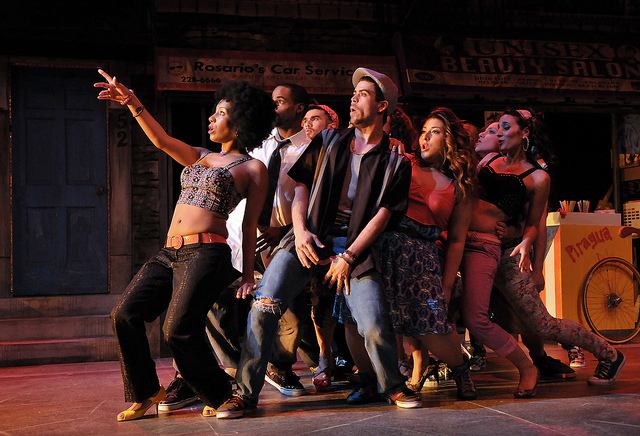 In the Heights Hits High Notes

SpeakEasy Stage Company’s newest production In the Heights dazzles as a proud piece of socioeconomic exploration. The musical took New York City by storm in 2008 as a Tony-winning Best Musical, and SpeakEasy stages its own production with the same passion. While the leads lack some of the star quality necessary to sell their stories, the ensemble’s heart beats on for the lost culture and part of the city.

At the center of this musical is Usnavi, a young owner of a small bodega in Washington Heights, played with some aplomb by Diego Klock-Perez. Klock-Perez is tasked with the heavy role of leading the story from one scene to the next, which becomes leading the plot from one exciting rap to the next, but Klock-Perez didn’t awe me until late in Act II when his sensitivity and commitment to the small community life started to finally shine through. Perhaps Klock-Perez made the choice to appear detached from the community where he was raised, but this choice created a disconnect among him, the rest of the ensemble, and, ultimately, the audience. Luckily, he had support from Santina Umbach as Nina Rosario, a young girl who once dreamed of leaving her small community but now realizes the challenges of making it elsewhere without the support of the (extended) family that she has always known. Umbach is outstanding, from her opening moments of indecision and confusion to her exploration in her relationship with Benny, an African American outsider played by Jared Dixon. Umbach is dynamic in her relationships with each and every member of the community, encapsulating Nina’s warmth and general vivaciousness, winning her friends in her community and within the audience. Her “Breathe” is stunning and her “Sunrise” is beautiful.

Unfortunately, Dixon is not as consistent in his performance. While he has many good moments, he also falls flat in many parts, never quite stretching himself to meet the angst necessary for the role. His voice is also easily overpowered by Umbach’s skillful and effortless performance. In general, the women overpowered the men across the production. Alessandra Valea impresses again, returning from her powerful role in Bloody, Bloody Andrew Jackson, as Vanessa, the beautiful ingénue who every man in the small Washington Heights would like to woo. Valea establishes herself early in the production as more than simply a pretty face with an amazing body, flexing her acting muscles to show the depth of Vanessa’s insecurity and yearning for a life beyond the small Dominician American community. Unfortunately, I never felt like I got to experience the depth of Valea’s vocal talent with a few brief exceptions in “It Won’t Be Long Now.” Even Camila, Nina’s no-nonsense mother- played with surprising energy by Nicole Paloma Sarro- outshines her husband Kevin Rosario (Tony Castellanos). While Castellanos carries some scenes on his abrupt responses, he fails to develop his character to the same level as his wife, and he creates a huge missing link within the Rosario family dynamic.

The shining star, however, surprisingly, is Sonny, Usnavi’s sassy young cousin, played with impressive charm by Jorge Barranco. Barranco carries every scene with the perfect balance of punk and sidekick. Barranco is always sensitive to his role, both within the community and the musical. He supports his fellow castmates, re-energizes scenes, and commits to every moment during the two-plus-hour show. This actor is one star to watch for future productions. The rest of the ensemble is a mix of talented dancers and character actors. While some are charming in their featured roles, their strength comes from their collective efforts.

Director Paul Daigneault creates a believable and empathetic community within the musical. More time could have been spent with some of the characters to develop their arcs more fully, suggesting to me that the production schedule might have been a bit rushed. The cast hit their stride late in Act I, despite some major technical problems that afternoon. The music direction by Nicholas James Connell was superb and seemed to draw out the vocal talents from each and every cast member. While some of the orchestration overpowered the singers early in the performance, these issues were mostly resolved by the end of Act I. One of my biggest concerns with the production team, however, was Larry Sousa’s choreography. Sousa is an incredibly talented choreographer, awing me in Bye, Bye Birdie and Bloody, Bloody Andrew Jackson. Yet, he misses the mark somehow in this production; I never felt like any of the dancing in this production had the spontaneity of a truly ethnic community. Only late in Act I, in the club, did any of the dancing truly move or surprise me. I wanted to see more passion and inspiration from within the community as displayed in their movements and dancing. Sousa’s choreography felt like, simply that, choreography.

Despite any limitations within this production, In the Heights sparkles as an honest and committed depiction of life within this Washington Heights community. SpeakEasy recovers from some of their problems in Bloody, Bloody Andrew Jackson to create a more inspired, heartfelt, and purposeful production. I would not attend this production again expecting star quality (some females excepted), but I would expect the same heart and passion in each cast member’s performance. When you’re in the heights, you truly feel like family.