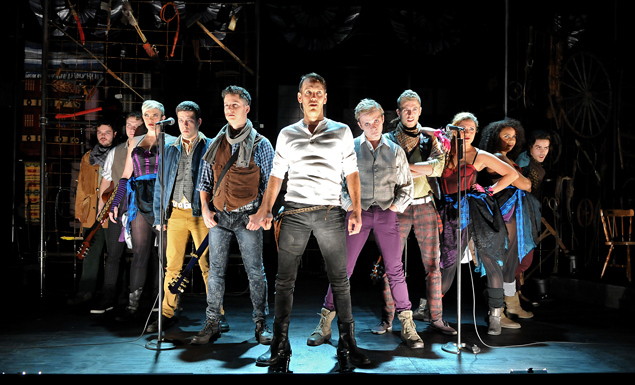 Bloody Bloody Andrew Who? Or He’s So Not That Guy

SpeakEasy, you never disappoint. After a short hiatus from reviewing their shows, I’m back and more impressed than ever. While the production has some minor issues (I call them minor because they were vastly overwhelmed by the good), the production rocks. Yes, we’ve hit the era of rock musicals, which take a seemingly mundane topic and turn the topic into the course of an epic journey for the audience. Bloody Bloody Andrew Jackson is self-aware, smart, and engaging in its hour-and-a-half performance. SpeakEasy brings this farcical show to its stage during a particularly poignant time in our nation’s history, resonating with this reviewer. Kudos to SpeakEasy and Paul Daigneault, for their continued excellence in selecting the perfect shows to complement their season.

First, I should express my concerns. Gus Curry, the Andrew Jackson and star vehicle for this romp through history, is not a leading man. At least not in this role. His first forty-five minutes onstage are, honestly, forgettable. The rest of the wonderful ensemble absorbs him and seems to give him the necessary energy to propel him through the motions. Frequently, he got lost in the shuffle of characters and actors. The dynamic cast partly caused this issue for Curry; they may be far too talented for mere ensemble roles as cursory characters and background singers. I still doubt Curry’s ability to command a stage and my attention for longer than a short scene.

This hesitation aside, the production was truly stunning. With a rocking opening number, “Populism, Yea, Yea!”, the stage is electric with energy. I have to acknowledge the incredible leadership and command by the Bandleader, played by Nicholas James Connell, who also not-so-coincidentally doubles as the Musical Director. While I didn’t quite care for Connell’s voice and fit for the role as Bandleader, the company of musicians are stunning and keep the music driving forward throughout the show. He is incredibly talented as a musician and music director, and I can’t wait to hear more of his work in the future (did I mention he also serves as pianist and conductor? What doesn’t this guy do?). Their simple, yet efficient team of musicians adapt to the wide range of musical styles with ease.

Director Paul Melone works with some fine skill in assembling this musical, from the visually interesting and decorate set by the consistently strong scenic designer Eric Levenson to the melding of fashions and styles by costume designer Elisabetta Polito. One of my favorite parts was the lighting design by Jeff Adelberg, who took each scene and moment and made it sparkle and shine. The choreography was crisply staged by Larry Sousa, and Angie Jepson’s fight choreography perfectly encapsulated the over-the-top mayhem in each scene. Everything was particularly well-rehearsed, well-research, and well done.

But none of it would matter without the incredibly talented supporting ensemble and characters in this company. I am always stunned by the amount of talent in Boston; and I think some of the best tread the Speakeasy stages. From the captivatingly confident Brandon Barbosa as young Lyncoya to the charming and grandiose Mary Callanan as the Storyteller to my personal favorite, the quirky and whiny Tom Hamlett (the character, not him) as John Quincy Adams (“My father was President, so I should get to be too.”). Yes, I felt almost bored because I tried too hard to focus on Curry, and then I realized that the magic exists in the supporting cast. Even his chemistry seems lackluster with his beloved Rachel, played with some gusto by Alessandra Vaganek.  I can’t tell if her performance fell flat because of Curry, or if the role was simply flat with too much exposition. With a bold exception from Amy Jo Jackson, a fierce and fiery Female Soloist who needs a leading role like this book needs a rewrite, the men vastly outshone the women. And rightfully so. The book does a clever job of creating some of our lesser-known historical forefathers. I may have particularly enjoyed these characters more than other audience members because I had a wonderful Advanced Placement U.S. History teacher in high school, but I digress. My point is that even fine young men create dynamic, interesting and compelling characters from research, creativity, and charm. If you didn’t know who John Calhoun or Henry Clay were before this show, you will definitely have a strong impression of who they were and what part they played after seeing Ryan Halsaver and Diego Klock-Perez, respectively. Yes, easily the best number in the show is “The Corrupt Bargain” for the chance to see the ridiculous scheming by these historical politicians. This cast strikes a delicate and artful balance between satire and truth. I will admit that Curry and Vaganek moved me to tears at one point. Curry saves himself with the energy of his supporting cast in a few key numbers in the middle of the show.

Overall, the show is highly enjoyable, entertaining, witty, and thoughtful. As usual, the production team is skillfully assembled and extraordinarily talented, the cast is one of the strongest ensembles I’ve seen yet this season, and the story is smartly told under Melone’s wonderful direction and his cast’s nuanced performances. Don’t miss the final weekend of performances, running until November 17. Speakeasy has crafted another remarkably strong season, featuring Other Desert Cities in January and February, Pulitzer Prize winner Clybourne Park in March, and Tony winner In the Heights in May and June. These productions promise to be Boston award-winners!