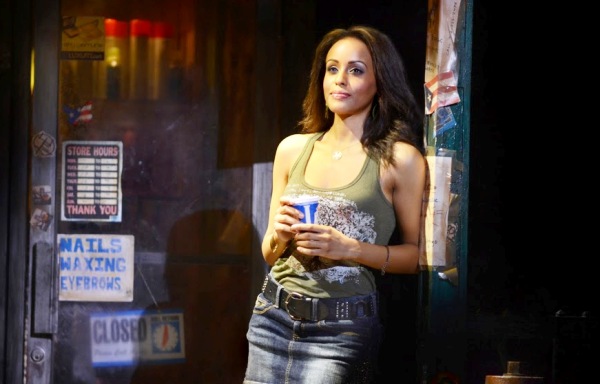 Our favourite production that the sadly departed Dancap Productions ever brought to town was In the Heights. Its standout performer was Presilah Nunez who brought her powerhouse voice and endless empathy to the role of Vanessa.

One of our Best Supporting Actress in a Musical nominees in this year’s My Theatre Awards race, Presilah took the time to answer some questions about the tour that brought her to town and to our attention.

Can you remember your first experience with musical theatre?
Yup, I sure do. I was nine and it was a summer musical theatre camp back home (Massachusetts). We wrote our own show and then presented it to our parents at the end of the two weeks.

What are some of your favourite musicals?
It’s funny because I have a list of favorite musicals that I would love to be in and another list of favorites that I know I probably will never be cast in, but I love them anyway. The first list includes: The Last Five Years, Aida, Rent, Les Mis and Chicago. The second list includes Sweeney Todd, Jekyll and Hyde, Ragtime and so many more that I’m sure I’m not thinking of right now.

Do you have any dream roles you’d love to play?
My top dream role used to be Vanessa, go figure! Now I would have to say Mother in Ragtime– totally not going to happen, but you did say “dream role”.

Where did you develop your triple threat skills?
Aw, you’re sweet, thanks.  Funny enough, I don’t consider myself much of a triple threat. I’m a “fancer”-a fake dancer. I can totally fake choreography and perform it well enough for the untrained eye, but any trained dancer would totally notice my lack of technique. Luckily, for Heights, I grew up dancing to Latin music since I was little (my family is Dominican and Puerto Rican), so the Latin rhythms and dance styles were already in me. Don’t get me wrong, I can totally break it down if I’m at a party or nightclub, but I will definitely not be cast in A Chorus Line in this lifetime and dance calls scare the living crap out of me. I didn’t go to college, or university at all. I started working right after high school, but I have taken singing lessons for over 10 years. And I try to enroll in a few acting classes a year, so I’m always still training.

Describe the audition and rehearsal process for In the Heights.
The audition process for Heights was extremely tedious and lengthy. I think I had about 4 or 5 callbacks in total. I was living in Boston at the time, and I had those 4 callbacks on a weekly basis, so my audition in total took about a month. One callback was a dance call back and the others were music one-on-ones with none other than THE Alex Lacamoire. Terrifying. He was extremely nice and easy-going though and he made me feel super comfortable. I mean, As comfortable as you could be singing his music back to him. There’s no fooling the man who wrote the music. The original creatives were completely involved with every aspect of our production and were so specific as to what they were looking for. So much so, that after holding auditions in NYC, they went to LA to hold more auditions, which is where they found a third of our cast.

Ironically, the rehearsal process was short and quick. I think we had the show up and did our first run (in front of Lin-Manuel [Miranda, the writer and star of the original production]) in like 10 days. We had three studios going at once–one was          scene work and blocking, another was learning music with Lac and the largest was all of the ensemble dancing and large group numbers, which if you’ve seen the show, you’ll know is basically the entire show. The dancers are ALWAYS on stage. They really are the unsung heroes in this show. I would sneak into this studio just to watch them. I was so amazed as to how quickly they would learn the large dance numbers- average of one a day. Imagine learning “96,000” in ONE day?!

Were you familiar with the original production when you took the role of Vanessa?
I was to a point. I had never seen it on Broadway. But I had seen my fair share of Karen Olivo Youtube videos.

What were some of the biggest challenges of the show itself and doing such a big tour?
I would say one of the challenges of doing this show and in specific, touring it the second year, was our schedule. We would often have a week of one-nighters, where we would get into a city a few hours before the show. We’d then have about an hour or two to check into our hotel rooms and get ready to head over to the theatre for company meeting and sound check. Then we’d MAYBE have some time to grab some dinner, or get it delivered to the theatre and before you knew it, it was half-hour. Do the show. Get back on the bus after the show and head to the hotel. Up at 7am the next morning to start the trek to another city      (and sometimes another city in another state) and then start the process all over again.

What were the best and worst places the tour stopped? Did audience reactions vary by geography?
I honestly can’t say that we stopped at any bad places. The show is so well-liked all over that even in the smallest cities in the US, we had amazingly interactive and responsive audiences.

Vanessa’s tough as nails but you made her endlessly relatable. How did you approach making that happen?
I tried to fill in some of the blanks on her life that weren’t necessarily provided in the script. For example, we know based on Daniela making reference to her mom’s drinking, that Vanessa came from a rough and probably not very stable home, but nothing else is said about her home life so I kind of created my own storyline  so that I could make her real and dynamic to me and in turn the audience would see her as that real person too. To me she’s a real person. I myself have some Vanessa in me, and I think every girl does. We’re masters of that famous quote about putting up walls so that we can see if people care enough to take them down.

What did you bring to the role that was all your own?
There have been so many talented Vanessa’s before me and I was just building on top of the amazing work that they each had done. So the groundwork was definitely laid out, although at the same time that also meant that I had a lot to measure up to. But in terms of what was my own-I didn’t go into it thinking that I needed to reinvent the wheel to make it my own. And as actors, we each have our own life experiences that we bring to the character that makes it our own anyway and we just have to trust in that. So in addition to my fill-in-the-blank storyline that I told you about, having been raised in the Latin culture-the language, the music, the mannerisms, all of those I brought with me from back home.

Do you have a favourite moment in the production?
The Finale. Hands down. Oh, and actually, in this specific production, the Graffiti Pete and I had toured together in the past. Actually, he was on my first tour in China that I booked out of high school, and he showed me the “touring” ropes. So during “96,000” when Vanessa crosses from down stage left to center stage (“I’ll be downtowowowon” [Laughs]) with Graffiti Pete leading the way before her doing all of his tricks-that was a favorite moment for us because these were our dream roles years ago, and then there we were doing them, together.

What are you doing now/ what’s your next project?
I just moved out to LA in January to one day get on the big screen (my dream) and pilot season is just about taking off out here, so auditioning.

Do you have anything you’d like to add?
Nope. I’m Latina, I’ve probably spoken too much already [Laughs].