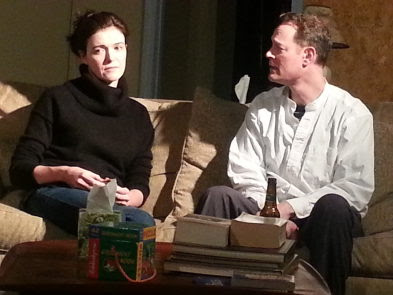 Another Trip Down the Rabbit Hole

Wait, another Rabbit Hole in the Greater Boston area? Yes, another. Community theatre companies have a fascination with the piece for its perceived simplicity and emotional range. Hovey Players in Waltham is one of Greater Boston’s stronger community theatres, boasting a rich history since 1936. Their Rabbit Hole proves that they have the tenacity and talent to tackle this demanding play with almost an effortless grace. In short, it was one of the best productions of the recently over-produced play, and it should have run for more audiences to see how the play should be performed.

Rabbit Hole follows a young married couple, Becca (Katie Gluck) and Howie (Alex Thayer), who must face the unimaginable: losing a child far too young and far too unexpectedly. Picking up their story six months after a tragic accident involving a teenage driver, Becca and Howie grieve in their own, but separate ways. The beauty of the piece is writer David Lindsay-Abaire’s ability to mix the grieving process with daily and ordinary life’s continued motion and movements. Laundry is done, meals are made, desserts are eaten. But within each of these moments, the memory of more than one lost love lingers in the air. This is not a play about tears or about mourning, it’s a play about grieving, and how each person grieves and finds comfort in his or her own way. The brilliance of Hovey’s production is, in part, how each actor finds his or her character’s journey within the piece and makes it special and meaningful. While the play can be clearly seen as Becca’s story, as the young mother who is in almost every scene and who has the most obvious revelation towards the end of the play, these actors were smart enough to make the play about each of their stories, as they negotiate, collide with, and help each other’s journeys.

The set is nothing remarkable, but in its seeming simplicity, we find the greatest comfort and joy. Here, the crowded playing space of the small Hovey stage could cause serious traffic problems for the four family members, but these actors, along with intelligent and resourceful Scenic Designer Tom Powers, make the space seem natural and alive. The walls seem pressed together on the tight living quarters, the ceiling hung low. Yet, the family goes on living, transitioning from kitchen to dining room to living room with ease. It’s this comfort with the playing space that reinforces the family’s tight relationships, becoming an unseen and influential character which ties the family together while seeming to keep them apart. Equally efficient and effective was the sound design by J. Mark Baumhardt which had the beautiful and haunting non-lyrical melodies to transition from one scene to another, almost as if in a trancelike dream. The lighting design by James Lavenburg did not have the same effect. Bright colors illuminated outside the house, often causing wide splashes of otherwise unnatural shades of red and yellow. Sometimes, these lighting designs created a beautiful setting sun, like in the final scene, but, other times, they created harsh reminders of a limited community theatre production.

Director Michelle Aguillon does a marvelous job of leading her actors through this tough and nuanced play. Aguillon and her actors create the necessary relationships which make Becca and her sister Izzy feel like family, but they also know how to create layers to this complex and real people by introducing subtle gestures, knowing glances, and connected responses, especially during the small ensemble scenes. It’s difficult to highlight one good scene or moment, but Izzy’s birthday party is immediately a stand-out for me. Maureen Adduci’s Nat provides the delicate balance of a matriarch who has seen too much heartache in her life, but who yearns to keep her family intact; her wine guzzling is as effective as her comforting words. Her scene with Gluck’s Becca while resiliently cleaning Becca’s former son’s room is heartbreaking, but, more importantly, Adduci and Gluck make the moments more about their journey in the present than about reminiscing about the past. Thayer is easily one of the best Howie’s that I’ve seen, capturing his struggle as a father who is not able or willing to let go, of his former son or of his love for his wife. His skill as an actor shines when his Howie struggles to connect with Becca; his talents are best shone in Howie’s resiliency and nuance. For the first time, I wasn’t sure about his sincerity in the beginning of Act II when Brooke Casanova’s Izzy confronts him about another woman. Their interplay and relationship is sharp and dynamic, pushing against each other. Casanova is a delight to watch onstage, taking each moment and breathing her character’s story through Izzy’s desire to prove herself but being caught in Becca’s shadow. Casanova has plenty of humor, but she is graceful by never landing too hard on a joke or pushing the reactions beyond the natural.

And tying the production together is Gluck’s Becca. I have seen many actresses attempt Becca, some old, some young. Few have felt as right as Gluck’s tormented but tenacious Becca. Beneath the tough exterior, Gluck provides glimpses of a wife, sister, daughter, and former mother who feels lost down a rabbit hole without her son’s warm embrace. Gluck shows her internal struggle for comfort and understanding through her constrained emotions and moments of softness and weakness. My favorite moments come when Gluck pulls back after her Becca loses her control over her emotions, and Gluck pulls back a layer of Becca’s emotional complexity to reveal her wounded self, before covering it again and marching back into battle. Love is a battlefield, and Gluck’s Becca tries desperately not to be a casualty again. The moments of weakness, when she reaches out to her family, especially with Adduci’s Nat and Thayer’s Howie in their respective scenes are heartbreakingly good.

I struggled with Jordan DiGloria’s Jason. Jason is the teenager who drove the car which hit and killed Becca and Howie’s son, Danny. While that might sound like a spoiler, Lindsay-Abaire is careful to make the real story about so much more than an accident. DiGloria’s Jason never finds the emotional nuances that his castmates explore in this production. His monologue, a letter written to Becca and Howie, reads as stale, monotone, and bored. Unlike the other characters, his Jason never feels like he’s searching or pursuing anything. With stagnant character development, DiGloria plays his scenes as if he’s going from one line to the next with no deeper goal or journey. Fortunately, this choice (or lack thereof) doesn’t slow Gluck in her evolving journey to find comfort and connections.

With so many outstanding performances, Hovey’s Rabbit Hole played with effortless sincerity and heartfelt grace. The production carefully negotiates Linday-Abaire’s script for each moment of truthful connections. These connections allow the production to breathe life into the characters, their relationships, and their struggles, creating a rich world that you want to hold tight for fear of losing each of the characters. I will hold tight the memories of each of these talented actors’ excellent performances, and look forward to Hovey bringing similar outstanding work in their next productions.