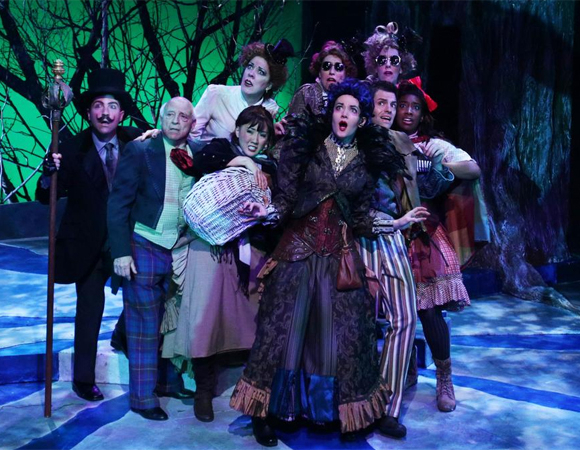 Magical Moments in the Woods

Into the Woods may be one of my favorite Sondheim musicals, if not one of my favorite musicals. I have seen and participated in countless productions of this show, so I come to The Lyric’s production with a wealth of knowledge and experience. For any other production, this burden would be insurmountable; I would be unable to clear my preconceived notions of whether Milky White should be played by a versatile and physical actor or a suitcase, whether the Witch should be remorseful or vengeful in her rendition of Last Midnight, or whether the pace of Ever After was brisk enough for the Act I finale. Luckily, I brought my mother for a fond Mother’s Day treat. As a newcomer to the show (though with my endless chatter about the musical for almost twenty years), she brought a fresh perspective to seeing the musical. Even more so, however, The Lyric Stage Company of Boston brought its own fresh and invigorating perspective to the musical with its creative casting, artful storytelling, and powerful performances. This production is (in almost every way) worthy of the Must See praise for which I offered it.

Composer and lyricist Stephen Sondheim and book writer James Lapine weave our classic and fond fairy tales of Cinderella, Jack the Giant Killer, Little Red Riding Hood and her Wolf, Rapunzel, and more, with their own original fairy tale of the childless Baker and his Wife. The Baker (played with the ready charm and ample leading man charisma by John Ambrosino) learns that his house and family were cursed by not-nice-but-always-right Witch next door (played with comedic and beautiful undertones by Aimee Doherty), and, together with his Wife (played with surprising resilience and skill by Lisa Yuen), the Baker must find four magic objects to undo the spell: the cow as white as milk, the cape as red as blood, the hair as yellow as corn, and the slipper as pure as gold (the metaphorical symbolism is not lost on this reviewer). To get their wish, the Baker and his Wife journey into the woods, a metaphor for the hard and unknown path of life’s countless wants and wishes, along with a host of fairy tale characters with their own modern-seeming wishes: a Cinderella who wishes for her fairy-tale Prince and to escape the confines of her tortuous home; a Red Riding Hood who wishes to become an independent and knowledgeable young woman; and a Jack who wishes for adventure and excitement, and the gold and wealth that comes with it. By the end of Act I, all of the characters have seemingly achieved their wishes, but at what price?

Starting in Act II, we see Sondheim and Lapine’s imagining of what comes after “Ever After.” For instance, is Cinderella’s Prince sincere, or just really charming? What happens when you find that you’re in the wrong story? And do giants cry when their loved ones fall from the sky? As the stories jumble and mix, and a Giant’s Wife is on the loose, the fairy tale characters must band together to face the biggest threats and fears of their lives, all in the wake of unthinkable tragedies. Such is the light-hearted genius of Stephen Sondheim. With stories and themes meant for young teenagers and older, this modern fairy tale adventure musical is a jewel and prince of a tale for the family to enjoy and adventure together.

When I heard that the intimate Lyric Stage Company of Boston was attempting this colossal musical, I had my reservations. The musical demands some high-tech genius to make the magical storytelling come alive for a live audience. Despite any limitations, they make the musical work its comic and artistic genius with limited and artful technical touches. The storybook reality is sharply told in its brisk opening, as the main stories of the Baker and his Wife, Cinderella, Jack, and Little Red Riding Hood are told through simple setting and highly effective lighting.  The entire production relies on Scott Clyve’s lighting design for its darkening mood and shifts in time and place within the exciting and frightening woods. While functional, the set makes the most of the Lyric’s limited playing space, but hardly achieves the grandiose scale of other Into the Woods productions. Elisabetta Polito’s costuming, however, is worth its weight in gold; with rich color palettes, fine attention to detail (love the hair coloring and wigs), and flattering brilliance, Polito’s costumes are a storytelling genius of their own (with obvious accolades for the Witch’s Act II splendor and Cinderella’s ball gown).

Directed by veteran Producing Artistic Director Spiro Veloudos, Into the Woods flourishes because it breaks from the traditional Broadway-inspired successes and succeeds on its own meritorious storytelling and creative touches. John Ambrosino’s Baker is the stuff of heartbreaking virtuosity; Ambrosino marks his Baker as a leading man with giants of flaws to battle before he can rest. Ambrosino’s willingness to tackle the Baker’s selfishness and stubbornness make him the most relatable hero that I’ve seen in a production of Into the Woods, while also lending his natural charm and leading man vocals to create his own modern-day Prince amidst a “working man, every man” story. Luckily, he has a Baker’s Wife, played with comic and masterful wit by Lisa Yuen, to match him. Yuen made her Baker’s Wife more than simply the Baker’s counterpart but a character with her own journey and woods to travel. More importantly, she brings each song alive with her spunky storytelling and powerful vocals. I always thought that the Baker’s Wife was the underappreciated female masterpiece (often outshone by the Witch and Cinderella), and Yuen proves that the role is memorable and worthy in its own right.

Aimee Doherty impresses in her turn as the iconic Witch. The Witch is a difficult role for any formidable female actress, not simply because it requires outstanding acting and a dynamic vocal range, but because of its predecessors, including (dull but famous) Vanessa Williams and (the always brilliant and iconic Sondheim interpreter) Bernadette Peters. Doherty proves herself as worthy of the task and role because she creates her own interpretation of the Witch without allowing herself to be dwarfed by the competition. Her Witch is a stunning blend of comedy and pathos, a biting commentary with soft maternal touches. Doherty uses her youth and beauty to craft her own fairy tale of a woman who exchanges beauty for power, and I was consistently reminded of the sacrifices beneath her tough exterior, a masterful use of an actress’s natural personality to bring life and resonance to a role. Newcomer Maritza Bostic also brings her personality and comedic flair to Little Red Riding Hood, spunkily skipping her way through “I Know Things Now,” and creating a young teenager with awakening sexuality and acknowledgements of the dangers for a young woman in the dark and shifting woods.

Other supporting characters make their mark on this musical. Maureen Keiller’s Cinderella Stepmother is comic genius in her arched eyebrows and raised voice; Sam Simahk makes a powerfully truthful turn with his trained heroic voice to Rapunzel’s Prince; and Will McGarrahan makes a snarky and clever interpretation of the Narrator, though he lacks some of the umph as the Mysterious Man. The ensemble as a whole is a powerful force, a living and breathing community to bring these stories to life, and the whole is more than the sum of their individual parts.

And despite the strong performances from many of these actors, some parts of the show suffer from odd casting and character choices. Gregory Balla is a talented performer, but his Jack struggles because of his age and experience as a person; he brings almost too much awareness and experience to his performance on his face and voice. His voice is trained and beautiful, but offers the wrong coloring for “Giants in the Sky,” displaying his age and experience in his rich bari-tenor voice. While I appreciated an older performer tackling this Jack, I didn’t find it as affective for the character’s journey from innocence to experience. Erica Spyres has a powerful voice and outstanding acting as Cinderella, but her innovative interpretation of the classic heroine as an independent and strong women subverts the character’s journey through the woods; she starts too strong, which leaves her with very little to grow as a character in her journey. Maurice Emmanuel Parent has the opposite problem; his Cinderella’s Prince is a weak testament to the princely throne that he put upon by others in the musical.

There are too many wonderful jewels of performance and artistic decisions within this musical. Veloudos makes the stories skip and frolic around and through each other with continuity and grace. The stories tell themselves with very little affectation or need for flourish; their simplicity in this production is appreciated because there is so much action, so much competing stories told by more than capable storyteller and actors. If I had to pick a show to see in Boston right now, it would be The Lyric’s Into the Woods because of its cohesive ensemble, strong performances, and powerful storytelling. Go to the Woods!