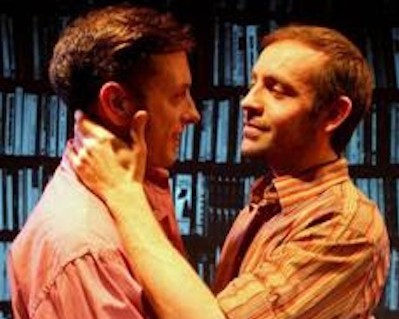 I believe that one point of theatre is to recognize the power of discussion and the poignancy of learning from watching others. Such discourse allows communities to react with knowledge, motivation, and purpose. To that end, Zeitgeist Stage Company performed a smart and heart-wrenching production of Larry Kramer’s The Normal Heart. Helmed by veteran director David Miller, the cast performs the iconic show with such raw emotion, making the show come alive for a new generation of audience members and creating the perfect journey for their characters and the audience.

Larry Kramer wrote The Normal Heart during a tumultuous 1980s, amidst a sea of disappointment, regret, and advocacy. The play stands as a hallmark of American gay theatre, perhaps only surpassed by the iconic (but rarely performed) Boys in the Band. Indeed, The Normal Heart ushered in a new wave of politically-charged gay theatre, leading to such gems as Rent and Angels in America. The Normal Heart, however, embraces its socio-political roots, firmly set in the early 1980s and refusing to be modernized. Yet, Zeitgeist Stage Company manages the impossible: the audience sees Larry Kramer’s New York City with fresh eyes and new heart. I have a few broad critiques of Kramer’s work; the show is politically unapologetic, almost to the point of creating a two-and-a-half hour rant about apathy and “the man;” and the show runs far longer than it should, both because of its sometimes one-note discourse and because of its stifled characters. Miller’s production succeeds is overcoming both flaws with superb results, thanks in large part to its committed and hearty cast.

Miller is a smart director; he knows when to push his cast and pull back the action to let the script and actors do the work. For the most part, his production is without gimmicks. It’s simply a beautiful journey for the actors and audience. While the play would be nothing without its message, along with its reminders about the many lost good men and women, Miller shows restraint for the most part. This directorial restraint allows his actors to shine and flex their emotional hearts. At the lead is the incomparable Victor Shopov as Ned Weeks.

As one fellow audience member reminded me during the intermission, Ned Weeks is an unsympathetic drivel of a man without much heart or soul of which to speak; in fact, some people argue that Weeks serves as a mouthpiece (and replica) of Kramer himself. Despite these critiques and limitations, Shopov infuses the role with such breathtaking rawness and vulnerability. From the beginning moments, Shopov creates a character with enough flaws to evoke pity and enough unwavering confidence to demand our respect. The result is a showcase of artistic masterpiece. Shopov creates the perfect dynamic as Ned, the self-imposed leader of a grab-bag assortment of men in 1980s New York City. It’s Shopov’s ability to connect with the material and his fellow castmates that allow the audience to empathize and cherish Shopov’s Ned Weeks, despite the character’s obvious flaws. He gives the kind of performance that stays with you, beyond the lines, beyond the message, as an impression of the journey of a man to find the heart and soul that he lacks and the beauty of such journey in an age where men fail to connect on such an emotional level. Shopov presents some of his best work, particularly aware of his emotional resonance and his connection with the character and audience. Such work allows The Normal Heart to become the inspiring and demanding work that transcends Kramer’s script’s limitations, and grow to something more worthy of our respect in the twenty-first century.

While Shopov is the stand-out performer in the cast, other actors shine brightly in some of their best work. Joey Pelletier finds a soft realism in his Felix Turner which impressed this reviewer. Shopov and Pelletier find a rhythm to their scenes which is both electric  and genuine, allowing their scenes to run the gamut of heartfelt emotions, from interest to respect to love to disappointment to despair. Few things were as beautiful as their understated and simple love for each other, evident in their looks and touch. Mikey DiLoreto also finds success in his Mickey Marcus, one of his stronger works to date. While DiLoreto falls into some of his familiar and comfortable acting patterns, he also manages to embody the Mickey’s struggles, culminating in an awe-inspiring rant of frustration; DiLoreto finds the inner rage within himself and his character, producing the perfect storm of emotions.

Maureen Adduci as the fierce Dr. Emma Brookner also deserves accolades for her performance. Adduci, confined to a wheelchair in the role, produces such tremors in her vivacious performance that you can’t help wondering what she could do with increased mobility and physicality. Each movement, every syllable receives that much more emphasis and importance for Adduci’s Dr. Brookner. While I recognize the inspiring performance she gave, nevertheless, I felt some hesitation in applauding her. Perhaps I disliked the character? Perhaps I wanted something softer in parts? Indeed, one of the hardest dilemmas faced in The Normal Heart is the rage-fueled dialogue and interactions, which can suck even the best actor into its vacuum. It takes a strong actor to overcome Kramer’s limitations as a playwright and Adduci almost manages such a feat.

One of the more superb moments (and that’s truly saying something) within the show is the relationship and scenes between Shopov and Peter Brown as Weeks’ brother, Ben. Riddled with back-story and issues, Shopov and Brown’s characters lash out at each other with confusion, insecurity, and love. The scenes between these brothers are some of the play’s strongest because the actors willingly put their hearts on the table for each other, never backing down from each others’ choices, never conceding, always moving towards something. It’s always inspiring to see two such acting giants tackle material and emotions with such courage and skill. There’s no coaching that kind of dynamic; it’s the kind of vulnerability for which The Normal Heart was made.

I need to emphasize the charm in some of the other supporting characters. Working with far less material Mike Meadors’ Tommy is a delight to watch onstage. Though he tended to fade into the scenery during some ensemble scenes, Meadors’ commitment is apparent and he delivers some strong choices. Moreover, he has a dynamic persona which allows him to share the stage with some Boston theatrical giants, such as Shopov and Pelletier, with a kind of quiet comfort. I look forward to Meadors next work, especially in a more leading role. Also, underused but always appreciated, was Kyle Cherry, an emerging fringe talent. While Cherry has some exciting moments, he delivers the best he can with limited material with which to work.

This production of The Normal Heart closed far too quickly on a stage in the Boston Center of the Arts which added intimacy but detracted in its limitations. For instance, from the back row of the tiny black box, I missed many of the scenes with any blocking on the floor or couch. Given my joy for the actors’ voices and commitment to their dialogue, I overlooked such flaw for the most part, but I am sure other audience members found such Directing 101 issue to be unforgiveable. I can’t fault Miller and his cast for working with what they were given, but I wish someone would fund Zeitgeist Stage Company for more elaborate productions. Here is a company which makes an understated splash on the Boston fringe scene which never truly gets the recognition it deserves from its rarely-performed, and outstandingly executed, productions. While The Normal Heart is long-since closed, its memory is not forgotten as a testament to fine acting, compelling scene-work, and heartfelt moments. I hope such memories will stay with readers, audience members, and reviewers for future awards and accolades for this small company.