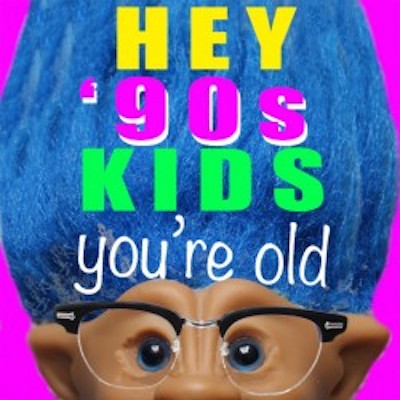 Hey ‘90s Kids, You’re Old (B+)
Hey ‘90s Kids, You’re Old, is really everything you want out of a fringe sketch comedy show: good laughs, clever premise, and pop culture references. That said, it is very possible my great enjoyment of this show lies more in the nostalgia factor, and less in the skill of the performers. Hey ‘90s Kids, is a compilation of skits that reimagine different ‘90s characters in contemporary settings. The target audience is probably all us ‘90s kids out there, unwilling to let go of the of the TV shows, songs, and toys of our youth. This is brilliantly explored in the opening silent skit, which finds all 6 actors on the subway, plugged in to their iphone/adroid/mp3 players, white ear buds standing out against their black attire like those ‘old’ ipod commercials. One character (Alexander Steele Zonjic) bustles in, jostling people with his big bag, finds his place, and pulls out a CD stereo. He plugs in his headphones, and mouths along to Seal’s Kiss From a Rose. The cd skips, and he opens up the CD player, blows on the CD, and returns it to the stereo. Thus are we introduced to the temporal tension in each skit of the show—we are simultaneously reminded of those good, old days, while enjoying the incredibly creative concept of ‘90s nostalgia in our now, very different, lives. The premise of the different sketches were simply brilliant: S-Club 7 meets Fight Club; Tamagotchi movie trailer (Raising Tom-agotchi); Carmen SanDiego and Where’s Waldo in an online chat room; and Magic School Bus Meets Breaking Bad, meets Law & Order, with a dash of CSI Miami (“Take chances, make mistakes, and cook Methamphetamine”). And the transition music alone had people grinning ear to ear (Strange Disease, Millennium, to name only a few). The writing, structure and presentation of the show was clean, engaging, and well done. That said, some actors were only okay, making some sketches fall flat. The only exception to this was Alan Bee, who brought energy and presence to every sketch he was in. Definitely one to check out, though not necessarily for the performance quality, but the nostalgia factor.

Time Stands Still (A)
Time Stands Still is a fascinating and complex script, offering the audience lots to think about long after the show is over. Despite the at time tendency for overly dramatic acting, Time Stands Still was a beautiful story about journalism ethics, post traumatic stress, and love trying to survive in the middle of it all. Sarah is a war photojournalist, coming home after a roadside bomb almost killed her. This adrenaline junkie is your typical rough-around-the-edges journalist, now needing to navigate the comfortable life. Her boyfriend, James, is a endearing and caring boyfriend, and a struggling (though talented) journalist. Their friend and editor Richard and his new girlfriend (/midlife crisis?) Mandy, show up every now and again to offer both Sarah and James, opportunity for character development and personal reveals. At first, after seeing so many sketch comedy and solo shows, my experience of Time Stands Still was: “Oh Right! Realism! Narrative! Characters development! Metaphoric and layered interactions with the seemingly mundane! Theatre! I had almost forgotten!”  Facetiousness aside, while nothing in Time Stands Still is on the cutting or marginal edge of a theatrical experience, this is certainly a strong show. Characters consider the morality of escapism and catharsis (meta!), along with the question of responsibility in journalistic representation. It certainly left us a lot to think about. There were a few drawbacks. Kirstin Hinton, playing Sarah, while certainly a talented performer, gave an inconsistent performance. By the end, she had certainly hit her stride, though I would argue her performance at times, felt a little too performed (Oh right! Acting!). Carleigh Beverly, playing the unintellectual, at times air-headed Mandy, was a joy from moment one. Her timing, energy, and subtle performance was a joy to watch unfold. And as a pair, Hinton and Jason Jazrawy (as James) had wonderful stage chemistry. The final moments of the show (don’t worry, no spoilers), were the most wonderful, with the audience giving a collective, knowing sigh, as the two shared a long hug. They were intimate, they were honest, and it was beautiful. I would definitely check out Time Stands Still—especially if you’re tired of all these young ‘uns trying to rattle the theatrical cage, and just need some reliable realism. It hits all of the theatrical marks, and will leave you thinking about the world we live in, and all of its complex personal and political stories.