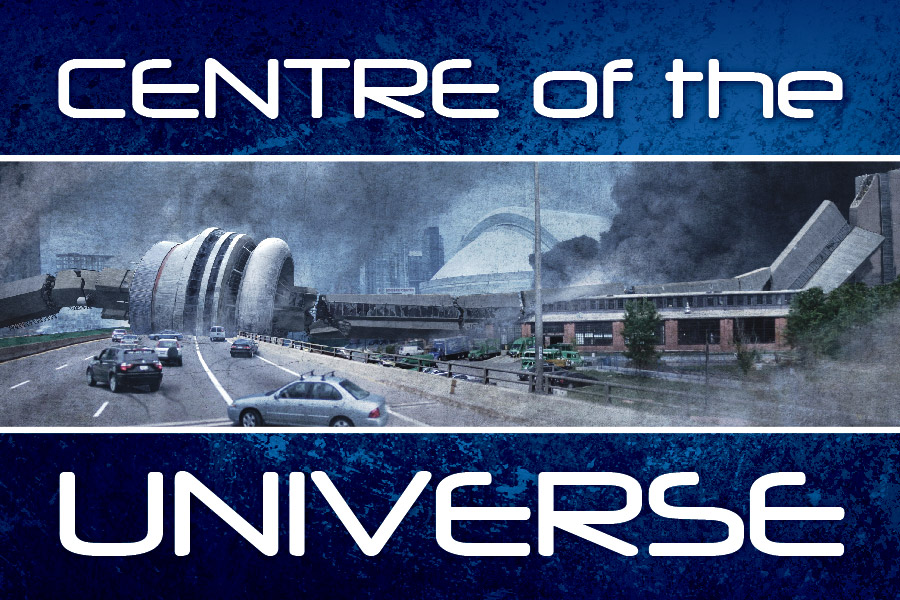 The Centre of the Universe (B)
The Centre of The Universe, staged between the taps and front windows of everybody’s favourite dive bar, “The Lab” is a gripping telling of the post-internet apocalypse. It builds steadily to its genuinely frightening and shocking climax on the shoulders of a couple of strong performances. Lea Russel and Michael Orlando move the show forward, taking care of their significant stage presences and showcasing their anxiety without getting circus-like or ridiculous. Because “The Lab” is so small, the actor-to-audience transfer of emotion is 1:1. It really feels like you’re sitting in the play! Russel and Orlando play opposite Mark Paci and Amy Marie Wallace who, boogie-trapped by a heavy-handed script – are reduced to caricatures whose choices blend to the background. The show is hampered by long periods of inner monologue, made audible by a crackly, too-quiet PA. The cast, though, bears the clumsy script with grace and makes the most of their opportunities to react to each other. Alexis Hancey’s frenetic entrance into the world of the play forces each character to examine the ways in which they have changed since the end of the world. Her catalytic presence forces the rusty derailer that moderates the gears of the show to finally budge. It becomes quite exciting to watch her irrational tours of force disturb the other characters on stage, who shake some of the sediment from their blocking and make some great decisions. Truly, director Omar Hady and his talented cast are able to elevate the middling script so that sitting in the lab, shoulder-to-should, cramped, craving motion, did really feel as tense as the end of the world.

Slut (F)
Slut, written, and performed by Erin Thompson and Robert Steven Wilkinson, staged at The Annex Theatre, is a bizarre musical caught between being a sob story, and a plea for a partner  told by an exhibitionist with some kind of god complex. The show is a collection of songs and monologues about Thompson’s love-life. The implicit premise of the show is that we, the audience, take exception to the fact that she’s promiscuous and happy. Unfortunately, if you don’t take exception to that fact – like much of the audience last night – the show never really answers the question that theatre faces so bluntly: why should I care? Also, strangely, she doesn’t even seem that promiscuous, characterized with prudish choreography and a teenaged excitement about saying the word “penis.” With an audibly buzzing sound system, poor singing and dithering dancing, Slut was hard to sit through. Even the costuming was a little painful. With many an ill-fitting wig slapped over her own braided hair, Thompson shimmies in and out of several outfits, on stage. She’s wearing, as a base layer, though, a kind of smock that is designed – maybe – to look like a toga. I never really connected the dots as to what the classical connection was and the creases it created in her top layers were quite distracting. And perhaps the weirdest moment of all, as if we weren’t expecting it from the beginning, as Slut ends, Thompson hurriedly gets naked on stage. Then she just stands there, drinking a beer with Wilkinson. In my limited view, Thompson has really missed the mark on the use of nudity to emphasize a point or embody a theme – though several older gentleman sitting nearby seemed not to mind. Thompson seems to just want everybody to see her naked. That’s fine; it’s just not interesting theatre.

Flip the Table (A)
Flip the Table is an installation art piece in the Fringe Tent by Honest Ed’s. For a price, you can smash a table, carefully set by several talented Theatre Technicians running the booth. The more you spend, the more glassware there is on the table. Not much of an actor, myself, a companion and I set about improvising a horrible date that ended with a lot of glass on the deck. We didn’t improvise for too long before I’d flipped a stemmed glass off the table, to the back wall of the booth and my “date” had smashed her plate to smithereens. Excited, I lost the thread of the scene and just yelled “table.” Over it went, with great satisfaction and energy. Particularly engaging, Flip the Table lives up to its name and is a boat-load of fun. It’s exciting to have technicians represented in such a concrete way at the festival…and to smash all that Ikea Glassware you’ve been hoping to smash for so long!