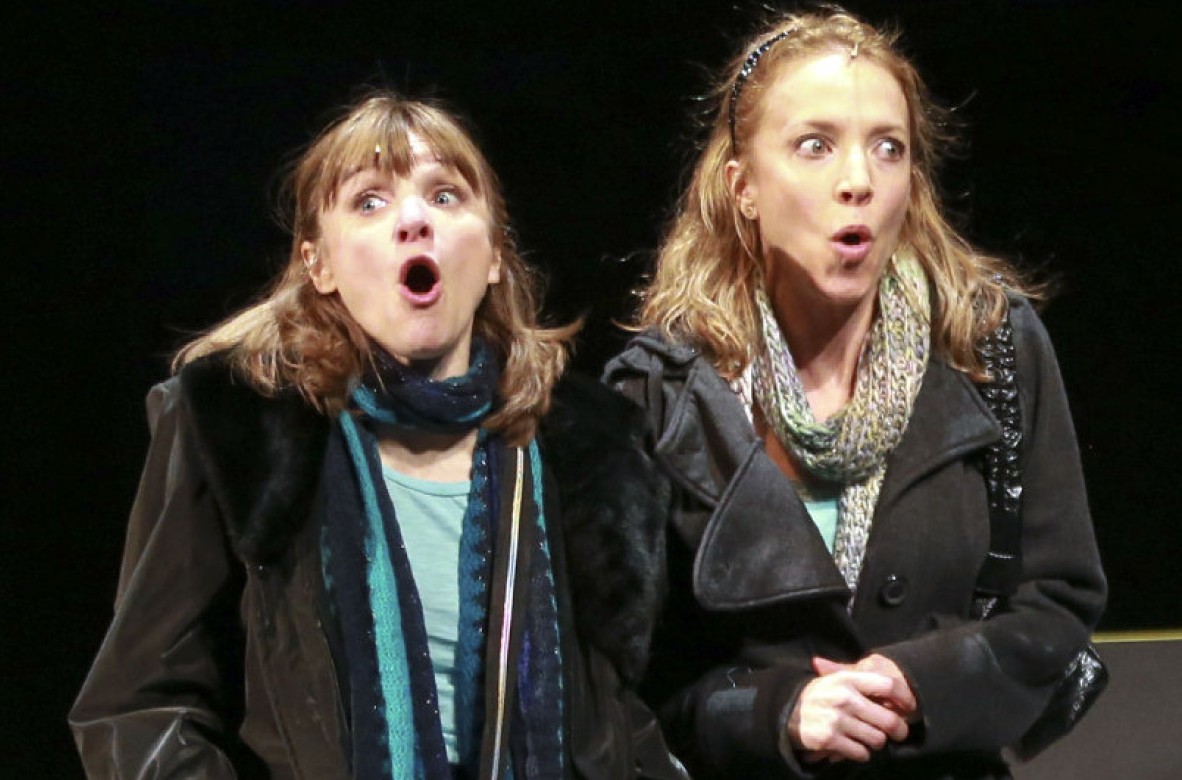 On Stage in TO: Musicals Everywhere (Part II)

London Road (Canadian Stage)
Alecky Blythe and Adam Cork’s verbatim musical is a strange beast. It tells a very docutheatre story in a very docutheatre way (which you know I’m not that into) but then incorporates another theatrical medium that stands generally on the complete opposite end of the spectrum from docutheatre- the musical. The act of shaping words into a song requires a certain authorly manipulation that seems to go completely against the whole pretentious point of verbatim. Songs give a piece shape, repeating and emphasizing what’s important and underscoring it all with a piece of music that further telegraphs the meaning and emotions in the carefully selected words. The result of said strange marriage is actually a wildly compelling piece of theatre. The musical style forces writer Blythe to get her hands a little dirtier, moving around verbatim words far less tentatively than she likely otherwise would. As someone who needs my artists to really create in order to get my attention, I found that I liked a docutheatre piece for the first time (it doesn’t hurt that the story of a community recovering from a host of local murders is a compelling one with plenty of characters worth listening to). Cork’s music is very non-melodic and contemporary.

Working, obviously, without a rhyme scheme, he develops a few catchier tunes (“begonias, and, petunias, and, um, impatiens and things” is a particularly lovely and character reflective ostinato) but, for the most part, assembles notes less for traditional musical values and more to reflect the natural intonations of the speakers. That’s an intellectually thrilling idea that, incorporated in small doses, could really revolutionize musical theatre character-based composition. Though I must admit that I missed the ways great musicals use music to evoke emotion and the demands of the vocals to reflect state of mind. London Road is really more of an intellectual exercise than an emotional one, but the sheer inventiveness of it is wonderful. It also sports a strong ensemble of really big names in Canadian theatre- Damien Atkins, Sean Arbuckle, Ben Carlson, Deborah Hay, Fiona Reid, Shawn Wright, the list goes on. They’re all wonderful and have done a remarkable job mastering what must be one of the most difficult-to-learn scores ever written. If I were to pick an MVP it would be in the unlikely form of Deborah Hay whose haunting turn as a frightened young woman (who sings the stirring “It Could be Him”) only slightly edges out her moments as a downtrodden prostitute and a scared housewife. The whole piece is a remarkable achievement, if not the most entertaining of ones.

Once on this Island (Acting Up Stage/Obsidian Theatre)
Every year I gear up for Acting Up Stage’s big shiny musical with the highest of hopes. They attract seriously good talent, they’re committed to under-produced but highly regarded texts, and they’re excellently funded. But every year I find myself just a little bit underwhelmed (the exception being 2011’s Parade, which was pretty darn great). And I do mean a little bit. I don’t want you to think that I think they’re not a good company. Au contraire, my disappointment mostly comes out of the incredibly high standard to which I hold Acting Up Stage, because I know they’re good. But their shows fail to excite me. Once On This Island, for instance, features multiple of my favourite performers, delivering far from their best work. Daren A Herbert– always a delight on stage- doesn’t have nearly enough to do as Papa Ge and Jewelle Blackman (a nominee in our first ever My Theatre Awards) is miscast in a role both too young and too high for her. Arlene Duncan, though, is perfectly placed and that little girl (Kaya Joubert Johnson) is magical. I suppose- Blackman’s slightly wavery vocals aside- the production is technically all well executed. Nigel Shawn Williams makes the smart directorial decision to make the gods members of the storytelling public with just headpieces to distinguish their otherworldly roles, and choreographer Marc Kimmelman’s work is appropriately intoxicating. But nothing about Ti Moune’s story grabbed me. I’m really not a Once On This Island fan to begin with (musically it has little of that Ahrens & Flaherty magic and story-wise it feels out of date and alienating) so, apart from the opportunity to pair up again with Obsidian (a fantastic company in their own right), I don’t know why Acting Up Stage would waste their energy on it. I liked the way the company handled the narration, but they failed to tell me why their story was worth listening to.