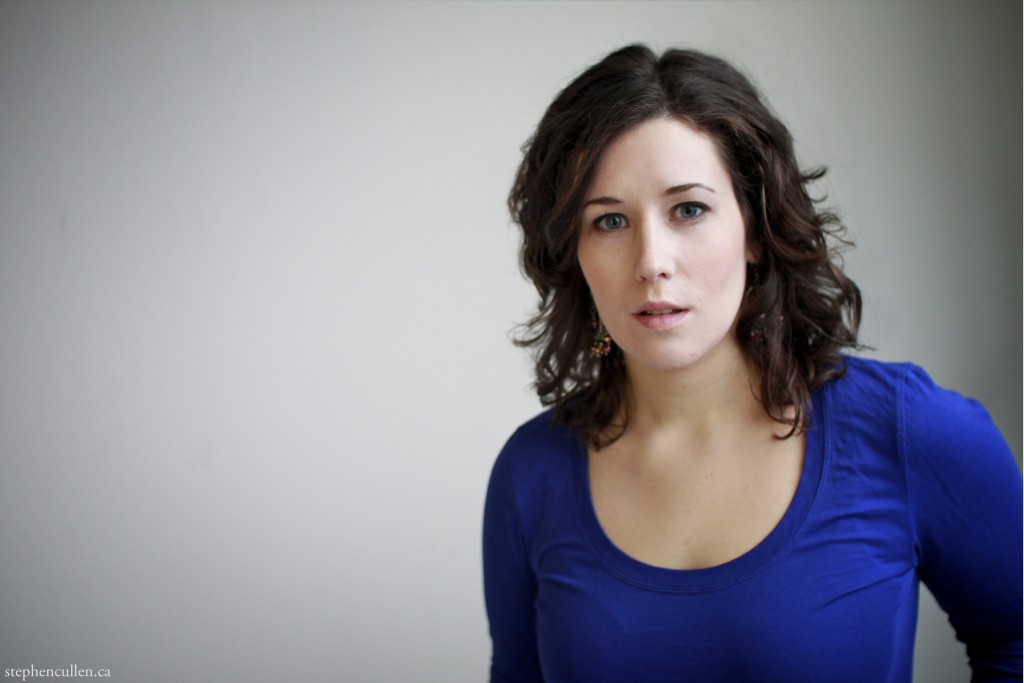 The charming Best Supporting Actress in a Regional Production nominee looked back with us at some of her best performances in recent years.

Can you remember the first theatre production you ever saw?
I have very vague memories of this, but my grandmother told me a few years ago that she took me to see a high school production of Macbeth when I was 5. Clichéd as it is, she told me I leaned over and whispered that I was going to be an actress. I’ve always felt this deep connection to Macbeth and had never known where it had come from.

How did you first get involved with Single Thread?
Alex Dault (the writer of The Campbell House Story) and I went to theatre school together and really got along and so I auditioned for Single Thread’s production of Much Ado About Nothing. I really love site-specific theatre, and have a background and interest in history, and so Single Thread’s mandate is right up my alley.

Let’s go back a bit- can you tell me about making Margaret a standout character in Much Ado at Spadina House?
I have always believed in the saying ‘there are no small parts, only small actors’. I saw this show once where the most compelling, interesting, and hilarious person on stage had no lines at all. And that has really stuck with me. There’s so much life to be found in all of Shakespeare’s ‘smaller’ roles—and the challenge is to find it between the lines in a way. Also, I’ve always loved the character of Margaret and so it was such a joy to play her—she’s saucy, a little dangerous, a little bit of a troublemaker, maybe makes some wrong choices, but in her moments she has these really witty and intelligent repartees. Supporting characters are always interesting—and sometimes you feel less pressure than big parts and so you can find more freedom to play.

You played the only fully-fictional character in The Campbell House Story. Did you work with playwright Alex Dault on creating the character?
In a way every time you work on a new script the actor is helping the playwright create it. But he didn’t write it with me in mind or anything. But I think there were places where Alex expanded the character based on what he saw me do in rehearsal, or based on my skills. So the character kind of `filled out` as we went along. I immediately identified with her—I felt like I knew this woman, and knew I could be her.

As the character responsible for leading the audience through the site-specific piece, your role required a lot of improv. Is that something you have some experience with?
All acting is improv in a way—and I did study some improv in school. But I think it`s more about using your acting skills of ‘being present’, really responding and listening to what the audience is doing or saying. I found that I could read the audience. You could tell when they were restless and needed direction or instruction, and you could tell when they were on the ride. And in some cases, my improv and my pre-show little banter would fall completely flat and be totally uninteresting… and then you just carry on. But most of the time I felt like I knew my character so well, and she was a lot like me, that the improve came easy.

Your Irish accent was superb. How did you develop it?
I trained in speech and dialects in school with one of the best teachers in the country. I’m also fortunate to have a good ear for that kind of thing and a pretty nerdy interest in dialects and use of the English language in general. Also I’m from the East Coast, and my family’s heritage is Irish, so I think that lilt in buried deep in my subconscious somewhere. Also during last winter, I happened to be working in an office with a lovely Irish lady at the time who had to talk on the phone a lot—and so I listened and took notes on her sounds while I was working. So there were several things working in my favour. However, also last winter, I was watching Game of Thrones while running this show and my accent started to develop a slight northern twinge.

What are some of the challenges of site-specific theatre? Were there many amusing mishaps?
With site-specific theatre, the general public and audience members seem to appear everywhere—we had a couple walk into the house in the middle of the show, audience members get lost, or off the track somehow, maybe some people see you running through the back of the house trying to catch you next cue—but you just remain in your character and deal with them.

Sometimes the show was oversold, so we had too many people to cram into these small spaces. But I loved it. I love acting right beside an audience member—it feels like we’re letting them in on a secret, or that they are part of the story and our world we’re creating. In this kind of theatre, there is very little physical separation between audience and actor. And that is an experience specific to theatre.

Do you have a favourite moment in that production?
There was a sequence of scenes which resulted in the kind of climax for my character. I had a kind of love scene in the hallway, then led the audience upstairs into the dance, and then danced into an interrupted kiss, and then ran away in shame. I enjoyed watching the audience walk up the stairs on their own, not knowing what they were heading into next at all. And I loved getting the audience to dance a bit!

After Campbell House I next saw you in Soup Can’s Antigone. What was that experience like?
We had a very different rehearsal period, very different kind of script and a very different venue to play in. The most remarkable difference for me were the house sizes. I went from doing a year of small, site-specific shows with a max capacity of like 40, to almost 200 people for every show in the Bathurst Street Theatre. With a bigger house, you have to be more aware of blocking, turning out, projection, and in a way really ‘presenting’ this play. With a production like The Campbell House Story, you really feel like you’re just living as this character and there happens to be 35 strangers watching you do it.

Do you have any favourite people to work with?
Definitely all the Single Thread people. My friends from theatre school. My roommate.

What’s your favourite role you’ve ever played?
Harriet Healy is definitely right up there. Celia in As You Like It.  Bev in Chapel Arm, by Step Taylor—I dream about having another go at it. Mrs. Gibbs in Our Town (I hope to play her again when I’m the right age). Shanarr in Cock-A-Doodle-Dandy—because I got to wear a fat suit while spouting ridiculous Latin phrase in an Irish accent.

Do you have a dream part you’d like to play one day?
Several—Elizabeth Proctor in The Crucible, Olivia in Twelfth Night, Lady M, Stella in Streetcar Named Desire, Ann Elliot in Persuasion (a Jane Austen novel, and really I’d settle for being any Jane Austen heroine), Margaret in Henry VI, Beatrice in Much Ado About Nothing—to name a few… I could go on for days.

Which directors and actors have had a major influence on you throughout your career?
I had the chance to work with Gina Wilkinson in theatre school the year before she passed away—I learned an incredible amount from her in such a short time, that will stick with me forever. My university drama director Ilkay Silk. Meryl Streep—her character work and specificity is glorious. She works so hard. And again, I could go on forever…

What are you doing now/ what’s your next project?
[I did] a new play called Turtleneck, at Hub14 in February, [then] maybe a Summerworks thing (fingers crossed), and hopefully a collective creation with Theatre By the Bay in Barrie.