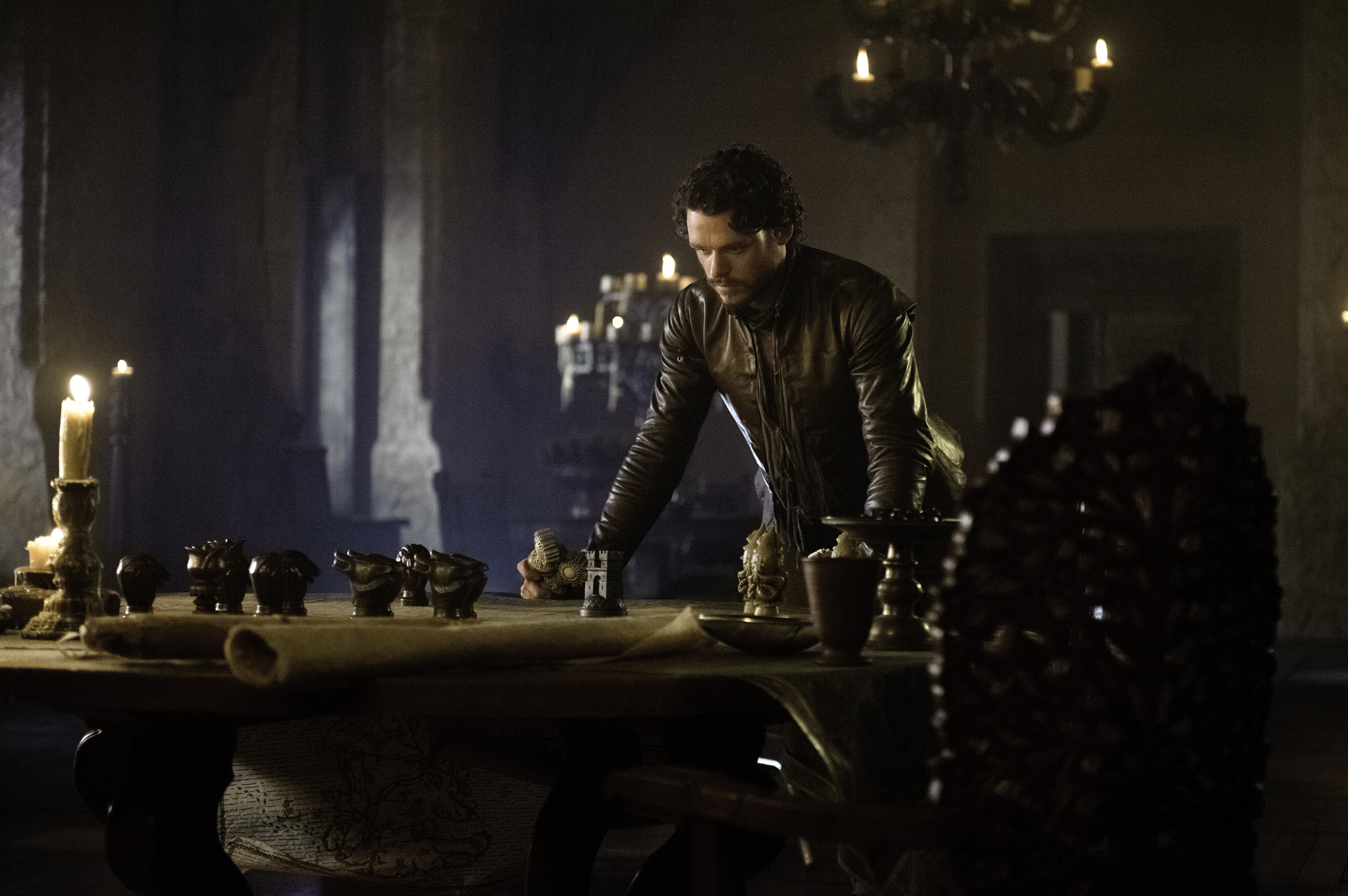 Over the past few seasons, it’s clear that sex is equivalent if not more powerful than money in Westeros. In the latest episode, we’re reminded that sex, love, and marriage are also weapons for securing lands and destroying potential enemies. Like plucking the first weed in a garden, offering a son or daughter up for marriage can halter armies from being formed and no one knows this better than the great and powerful, Tywin Lannister.

The first, and seemingly most genuine, act of lovemaking on the show happens between lifelong virgin Jon Snow and the forever-teasing red-head, Ygritte. Snow is helping the invaders plan an attack on one of three locations where the Night’s Watch protect the wall. Speaking with the two warriors, Snow quickly finds out that the duo wants to believe him, but will also slit his throat if he isn’t accurate in his word. Ygritte pulls Snow from the growing aggression by playfully stealing his sword. In a cat and mouse chase, he follows her into a cave that replicates a hot spring sauna. Stripping down in front of him for the first time, Snow remains awkward in any sexual advance but eventually gives in to the temptress. She admits that she would rather live in the cave with Snow than continue fighting for the others. The growing tension between the two is finally put at ease.

Landscapes away in another cave, the Brotherhood Without Banners are preparing for their “trial by combat” as Baric Dondarrion prepares to battle The Hound. Baric slices open his hand, pours blood on his sword, and then lights the sword on fire in some sort of ritual to the Lord of Light, showing his deep connection to another world of spirituality that watches over him. In a long and drawn-out battle, The Hound is backed into a corner but fights his way out and eventually swings with such a mighty force that he slices Baric’s sword in half and vertically separates his torso from his collar bone to his rib cage. Young Arya Stark is outraged by the events but the Brotherhood calms her down as they resurrect Baric and reveal that mortal wounds cannot stop them.

Stannis Baratheon visits his wife, where he seems to have locked her up some time ago. The captive, Selyse Florent obediently speaks with her husband and doesn’t really even seem to care when he admits having an affair in hopes of having a son. She already knew about his wandering urge since Melisandre already informed her. Despite his wife’s acceptance, guilt still seems to wash over Stannis and he continues to verbally abuse his wife for not giving him a son. Moments later, we find out that he isn’t childless and that he has a daughter locked up in a nearby room. Shireen, his daughter, seems thrilled to see her father as she asks about his adventures on the battlefield. When she learns that her friend Davos Seaworth has betrayed her father, she is only concerned with his whereabouts and plans to visit him soon.

Jaime Lannister makes it to Harrenhal, where he has been turned over by the Brave Companions to House Bolton. Much more compassionate than his travelers, his new keepers patch up his limb and offer him modern commodities like bath and bed. In a somewhat awkward scene where he baths in a large tub with Brienne, trying to hold his nub above the smoking water, he admits that his Kingslayer reputation is more fiction than fact. It turns out that he only killed Aerys Targaryen because the Mad King ordered him to kill his own father and then burn King’s Landing. Brienne questions this statement, feeling that this truth would have changed his fate. Jaime admits that in war, even the honorable Ned Stark is capable of passing pour judgment. Losing consciousness, he asks her to stop calling him Kingslayer as he falls into her arms.

In Riverrun, Lord Rickard Karstark seeks revenge and openly murders two Lannister boys. Furious, Robb Stark, ally and leader of the area, sentences the men to death. Rickard runs his mouth to Robb until it finally costs him his head. This leads to disruption within the ranks and House Karstark abandons Robb Stark. Amidst the chaos, Robb begins to search for connections between old allies instead of forcing the Lannisters to begin battle in their own backyard.

In a charming scene, Tyrion Lannister speaks with Olenna Tyrell about the approaching wedding that will unite the two families. Diving in with the high costs of the wedding, the Master of Coin is silenced when Lady Olenna replies, “What good is the word extravagant if it can’t be used to describe a royal wedding?” Moments later, and continuing to be wise beyond her years, she continues, “The people are hungry for more than just food. They crave distractions and if we don’t provide them, they’ll create their own. And their distractions are likely to end with us being torn to pieces.” Before a quick insult at Tyrion’s expense, she agrees to pay for half of the wedding to help out the Lannisters with royal costs.

Relieved at saving his family a small fortune, Tyrion meets with his father Tywin and his sister, Cersei. His family stops his celebration for bankrolling the event and asks him if he is aware that Sansa Stark plans to join the House of Tyrell. Knowing that Robb Stark’s forces are growing weaker, Tywin knows that Sansa Stark will soon be the heir to the northern portion of the Seven Kingdoms. Understanding all aspects of the game, Tywin’s next play is perhaps his most subtle to outside forces. Hoping to keep the Starks in play, he orders Tyrion to wed young Sansa Stark and have a child with her to unite the families. Outraged, Tyrion feels this is unfair to himself and to the young girl. Smiling, a frown soon crosses Cersei’s face when she too is ordered to marry Loras Tyrell to make sure that the Lannisters have bets on each table.