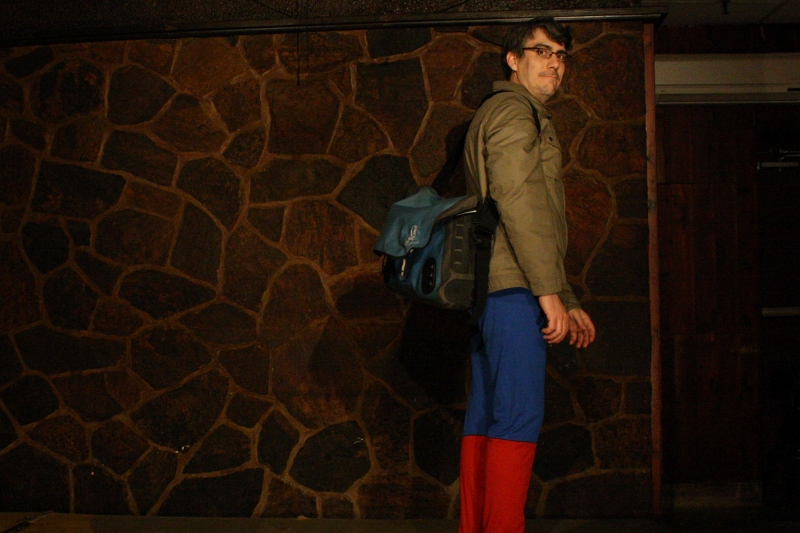 This year, Monkeyman Productions’ annual 4-play showcase of new, geek-oriented works takes a darker tenor than years past. The shift doesn’t feel like a deliberate one so much as a coincidence of tone amongst the best of this year’s script submissions but it has two pronounced effects. The first is the sad elimination of geek-music duo Debs & Errol (their lighthearted interludes just wouldn’t have fit in with the selected plays), the second is an overall rise in dramatic consequence. All four of 2013’s chosen plays have sky-high emotional stakes and, while that doesn’t leave as much room for amusing reference-heavy banter, it does exemplify how geek theatre doesn’t have to compromise depth for genre.

I don’t mean to say that this year’s showcase isn’t funny. In fact, my two favourite pieces in the mix could be called comedies, or at least dark comedies. The first is Adam Esquenazi Douglas’ Game Over: a Suicide Note, a one-man show that can only really be described as Existential Mario. Douglas mines the absurdity of the improbably varied Mario universe and finds poignancy in the video game hero’s endless, autonomy-less existence (and, most touchingly, in the profession of plumbing as a calling). Despite looking less like the iconic Mario than I do, Mitchell Court is splendid in the role, balancing the comfortingly familiar catchphrases with heartbreaking hopelessness and just a touch of the mania of a man who’s spent his life collecting coins and dodging shells.

The showcase’s middle two pieces are less memorable though still fairly strong. For In Black and White, Artistic Director Martin Chodorek (the evening’s charmingly informal host) cast 2011 My Theatre Award nominee Martha Girvin and our very own Leeman Kessler in a dance of ambiguous nature, at least in the beginning. As playwright Michael Trottier’s darkly sad premise unveils itself, Girvin and Kessler work pieces of honesty into their carefully crafted plays on film noir archetypes. It’s a study in precision that works splendidly at moments and gets a little lost in others (though I will say that the whole affair would have been greatly helped along by a little sexier costuming; poor Girvin is working doubletime to overcome her surprisingly dowdy getup).

Chloe Whitehorn’s Wasting Time comes next after intermission (I said this last year but why are we doing intermission for an hour show?) and, though startling in its intensity, it was the only one of the four plays that left me wanting more from both a storytelling and character development standpoint. I suppose some sort of rumination on parallel timelines is to be expected in a geek-focused showcase, especially one that’s darker in tone, but I didn’t get much intellectual conclusion from Whitehorn’s text. Victoria Urquhart’s direction is strong (the fight choreo is excellent, though the scene transitions are too slow) and the actors (Adam Cresswell and Jeffrey Henderson) deliver the terror, defiance, conflict and intimidation that the audience needs from them. But what it all leads to I’m still not too sure.

The performance’s final piece- Super by Monkeyman’s Resident Playwright DJ Sylvis- was by far my favourite. In fact, it was one of my favourite things I’ve seen in quite some time. Cameron Johnston is funny, fragile, and intensely likable as a man whose acting aspirations have panned out only as far as donning a Superman suit to take photos with tourists for tips. Sylvis’ script is clever and fun but also packed with genuine sadness and longing. His only character is a man who is at once the audience’s easy object of pity and one of the more inspiring characters I’ve seen. The optimism and faith he musters, the utter dedication, the kindness in the face of being ignored and taken advantage of and looking like a fool. My favourite moment in the play is when he explains why he asks for tips in his own voice instead of in character: “I don’t want them to think less of Superman” he says. That just about broke my heart. Here’s a guy as down on his luck as he’s likely to get and he’s worried about preserving the reputation of a fictional character so that he can live in peoples’ minds as a beacon of hope instead of a guy who needs money for rent. Sylvis and Johnston nearly had me in tears as the character (did he have a name? I hope not, because the metaphor of my already having forgotten it is just too much to handle) wondered at not the unattainable perfection of Superman but how even Clark Kent seemed to have the whole world conquered. Then, putting on his jacket over his costume, he tells us that “I used to have a place to change, but then they started locking the men’s room”. Super is a painfully relatable, sad but hopeful examination of a good guy’s small life as a “superhero” and is the crowning achievement of Monkeyman’s truly excellent 2013 showcase.