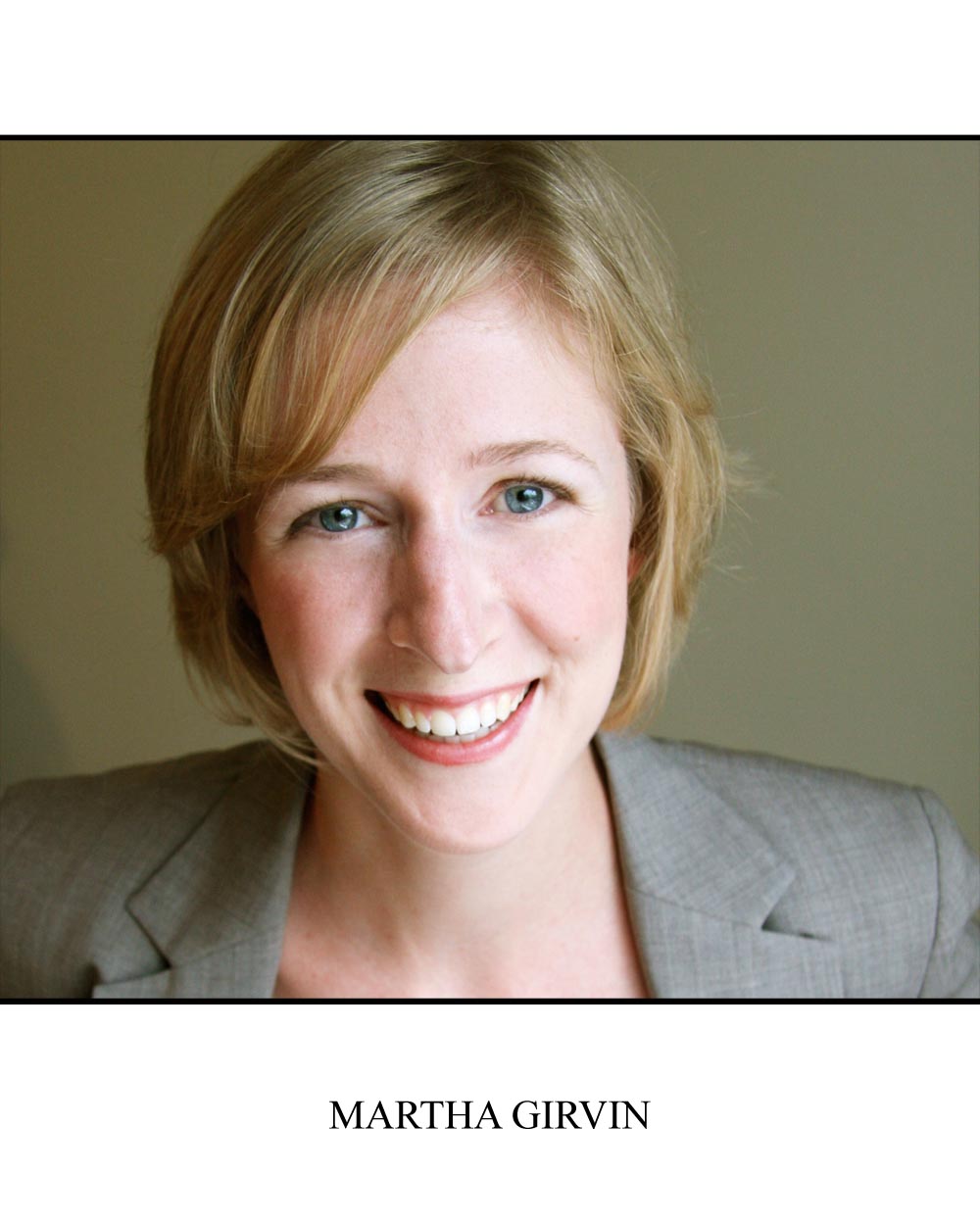 Our heroic web designer Linn Oyen Farley introduced me to Monkeyman Productions. Self-described as “Toronto’s Geekiest Theatre Company”, Monkeyman’s mandate is about creating theatre that’s as dedicated to Geek Culture (of the Star Wars-referencing variety) as an episode of Chuck. The result is a truly unique theatrical experience since theatre seems to be the last frontier that still belongs to nerds who spout iambic pentameter more than ponder the time-space continuum. Monkeyman’s fall production, Uncharted Zones, was a series of 4 vignettes- the best of which were “Chance” and “Last Train”, both starring Martha Girvin– a Best Actress nominee in the 2011 My Theatre Awards.

Can you remember your first experience with theatre?
It’s a bit of a hazy memory, but I do remember seeing a production of 42nd Street when I was about 6 or 7 years old. I don’t remember any details from the show, but apparently I became obsessed and listened to the Broadway soundtrack over and over again. I only know this because one of my childhood friends recently mentioned how annoying this was for her. I’ve never done musical theatre outside of school, but it’s definitely the first type of theatre I fell in love with. I think that’s pretty normal for kids – it’s such an appealing genre.

What actors and actresses have always inspired you?
There are so many whom I admire, but growing up I loved Fiona Reid and Martha Henry. I remember in particular seeing Reid in The Seagull and Hay Fever. She’s always so funny and vulnerable and immensely watchable, even when she’s playing some pretty awful characters. Also, Emma Thompson is a long-time favourite – she can do no wrong in my eyes.

Where did you study/develop as an actress?
I’ve had quite a circuitous path to becoming an actress. I took biochemistry at university and then never pursued a post-secondary acting program. Instead I took courses at various studios around the city, while answering casting calls for theatre and short films, and built my skill set that way.

Do you have any dream roles you think are perfectly suited to you or something completely against type you’d love to try as a big challenge one day?
I’d love to play the villain. This might just be a natural reaction to regularly auditioning for soccer mom roles in commercials, but I would love to go to the dark side a bit more often. I also realized playing Blanche [in “Last Train”] that I’m rarely called upon to employ my sexuality in roles and I would like to embrace that challenge. I think I’ve basically described a terrible B-movie Bond-style villainess. Utterly ridiculous and no one should have to watch me do that. Although, it would certainly be against type! As for a dream role, and this is obviously the complete antithesis of everything I’ve just said, I would love to play Beatrice in Much Ado About Nothing. She’s hilarious and a bit of a mess, but also fiercely intelligent and incredibly loyal.

Which directors and actors have had a major influence on you throughout your career?
There hasn’t been one specific person who has had an overarching influence on my career, though certain moments and experiences with people do stand out. A few years ago, I participated in a directing workshop with bcurrent theatre. They were looking for actors to work with members of their ensemble who wanted to direct. I was fortunate to work with Tanya Pillay, who was very supportive and got me to take risks and try whatever crazy ideas struck me at the time, which I might never have felt comfortable exploring in a higher stakes environment. I’d never gotten so much out of the rehearsal process before – it was a really freeing experience. Obviously when you trust the people you work with, the work is automatically going to be that much better. That’s why it was such a pleasure to work with Marty [Chodorek, the director] on Uncharted Zones and such a perfect way to transition back into theatre. He gave me a lot of freedom to flail about during rehearsals, as did Amanda [Ives] and Jennifer [Kenneally] who were lovely scene partners and incredibly indulgent.

What’s your favourite role you’ve ever played or production you’ve ever been in?
Well, I don’t know if I could pinpoint my favourite, but I’d love to go back and try a few of my university theatre roles once they are more age appropriate, like Marlene in Top Girls and Halie in Buried Child. I loved those parts, but obviously would be able to bring so much more to them now. To play Halie, I’d probably need to wait a few more years though!

How did you get involved with Monkeyman Productions? Was Uncharted Zones your first show with them?
Uncharted Zones was my first production with Monkeyman. I knew Marty from a Staged and Confused production we had both acted in years ago and he contacted me out of the blue to see if I’d like to read for these roles. I hadn’t been on stage for quite awhile and had been thinking about getting back into theatre, so his call couldn’t have been better timed. Then once I found out I’d have the chance to play an astronaut and a burlesque dancer in the same production, I was sold.

Monkeyman has a very specific geek-centric mandate, do you share the company’s central nerdiness?
Not at all! I felt like I spent most of the early workshopping process just looking up [playwright] D.J. Sylvis’ geek references on the internet. I really didn’t have much knowledge (and still don’t) of Star Trek or Dr. Who or any of the central Monkeyman cultural touchstones. But, what I did really relate to was the way pop culture permeates our lives. With one friend of mine, I know that right now I could call her and we could easily fill an hour talking about Parks and Recreation and the BBC Sherlock. But, even with my friends who aren’t tv/movie junkies, pop culture references crop up in many of our conversations. And often they aren’t even current – I mean, we’re still quoting Clueless on a fairly regular basis. I realize we should probably see something more contemporary, but the point is that this is how so many of us talk and relate to each other and it’s interesting to see it reflected more realistically in theatre.

Describe the rehearsal process for the show.
Because we were workshopping the plays and then rehearsing the final scripts for performance, the rehearsal process was quite drawn out. In the past, I used to find a leisurely rate of rehearsing frustrating because I didn’t know quite what to do with the time in between rehearsals, and always wanted to just get on with it. But, I actually really love it now. You get the chance to stew on things and it gives you that much more time for exploration.

How did you approach playing 2 very different roles?
Initially, I tried not to think of them as being two separate roles in the same play and focused on each role as if it was in its own production. Marty was great about not pushing too hard to differentiate the roles early in rehearsal, so it definitely took the pressure off and let them develop a bit more organically.  Both characters are enthusiastic, aggressive talkers, so I found the different power dynamics in their relationships the most helpful in distinguishing between them. It certainly helped that I had the most time between my roles in the actual production, so I could make the most physical changes, and that the character’s professions could not have been more different. I really enjoyed playing both of them, but now I’m waiting for D.J. to write his burlesque-dancing astronaut play. I’m not sure if that’s going to happen.

Do you have a favourite moment in the production?
Ver and Julam discussing Ver’s hamster as they hurtle toward death in “Chance” was a highlight. We all try to joke ourselves out of fear and it’s a lovely touch from D.J. Also, I loved the moment in “Last Train” when Alicia gets Blanche to admit that she understands that desire to quit. Amanda always broke my heart a little bit there.

What were some of the biggest challenges working on this production?
Time constraints in the space were definitely a big challenge, which is pretty common to all independent theatre. And because we’d mainly had separate rehearsals for each short play, it was definitely a challenge to understand the production as a whole in the short time we had in the space. More specifically with my part in the production, I found it quite tricky when playing Blanche to walk the line between her hard-earned confidence in her own choices and her desperate need for Alicia to stay. It can be difficult to retain any power when you’re the one who never stops talking. It always felt like a bit of a balancing act.

If you could pick one definitive moment in your career up to this point, what would it be?
I don’t think I can pick one defining moment. My career has never been a straight line and feels more like this accumulation of strange and wonderful little experiences. I suppose in terms of thinking of acting as a career, a defining moment would be when I was first paid to act. I can’t remember what the project was (I think it might have been an industrial training video for veterinarians – I’m serious), but it doesn’t really matter. It might sound mercenary, and certainly not all that artistic, but the idea that somebody had chosen to pay me to act was incredibly important.

Do you have anything you’d like to add?
Thanks so much for including me in this and for supporting independent theatre in Toronto!