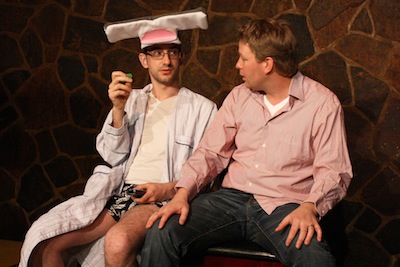 The annual short play festival at The Imperial Pub, put on by “Toronto’s Geekiest Theatre Company” is an adorable event. The tiny back room that houses a makeshift theatre has terrible acoustics and lots of pub noise leaking through the curtain that separates it from the main bar section. The lighting grid is sparse, the playing area small. But those conditions really work for the informality of Monkeyman’s evening (as do the food and drink you’re allowed to bring in with you, since you’re in a pub, not a theatre). If this were fancypants theatre I would have been annoyed whenever the actors failed to drown out the pub noise, or when transitions took entirely too long. But with a crowd of mostly friends and the jovial banter of artistic director Martin Chodorek to fill the gaps in action, The Simian Showcase turns out to be an enjoyably laid-back way to fill an hour and a half in Downtown Toronto.

The  evening (or afternoon, should you choose to attend the April 15th matinee) consists of 4 short plays of varying quality, separated by an unnecessary intermission and two very welcome short sets by geeky-fantastic musical duo Debs and Errol. Their songs are simply composed but lots of fun, their banter is superb and their references so niche that almost every single one of them went over my head (which, for a band with a hardcore geek mandate, is how it should be). A great “emo girl” song wherein Debs scolds Errol for not watching Battlestar Galactica is particularly fun, and I’m sure I would have really enjoyed the Star Wars odes had I known what they were about (I finally caught on to the fact that they were Star Wars at all when the name “R2” finally came up: I Know That One!). Anyway, if you’re an actual geek (and not just, like, a Shakespeare geek) you’ll like them even more than I did, so go see The Simian Showcase for them, if for nothing else. Oh, and check out their web comic at http://debsanderrol.com/, cause they’re just that quirky.

The actual theatre part of the theatre showcase is less consistently awesome than the quarrelling friends and their geek songs, but when it’s good it’s really good. The best of the four short plays is Shark Week, the story of two friends whose Shark Week tradition is coming to an end. The whip-smart script by Matthew Ivan Bennett is by far the deepest of the four (and the funniest), dissecting the dissolution of a friendship and the (sometimes juvenile) ties that bind old friends together. Michael Atlin is particularly great as the Shark Week enthusiastic who is being abandoned by his friend whose grownup life and marriage no longer have room for their silly former rituals. Apparently the actors in Shark Week switch roles performance to performance, but I would shoot for the casting I saw, if you can at all help it when buying your ticket to the showcase.

The weakest of the four plays is actually the very first one (don’t be discouraged, stick it out). Nick Philpott’s Gunpowder Arizona is just nerdy silliness more than anything else. It’s about two roommates collaborating on a new comic character, derivative as their ideas may be. While Philpott’s script isn’t as strong as some of the others, it’s the acting and directing in Gunpowder Arizona that really holds it back. What the other actors and directors in the showcase have figured out is that geeky verbosity only really works at high speeds and with great energy. Shark Week, in particular, nails the enthused smart person rhythms of nerd-speak. The reasons the geeks inherit the earth is that they’re smarter than everyone else. If they’re not- if they’re slow talkers whose best ideas are Indiana Jones ripoffs- then the fun of geekdom goes away. And since the play’s not about the melancholy plight of the un-fun geek, they really really should be quicker, at the very least.

Captain Incredible versus The Girlfriend, like Shark Week, has more going on under its nerd-content costume. It’s a simple relationship story about Captain Incredible (or, Joe) confessing his real identity to his girlfriend. She already knows but wishes he’d kept the secret so that it didn’t change their relationship. The script, by Sarah Bowden, smartly considers the practicalities of secrecy and heroism in a funny, somewhat subversive way. It’s also one of the best acted pieces in the showcase with charismatic turns from Adam Cresswell and Melanie Hrymak.

The final play is Two of Everything by D.J. Sylvis, which is the passably good but mostly unmemorable one of the lot. It’s a slightly forced story about two cos-playing con-goers and their battle (with metaphorical value!) over whether to buy another action figure or Blu-Ray souvenir. Of the 4 outlandish plots, Two of Everything‘s is the only one that doesn’t feel particularly honest and is therefore somewhat forgettable.

There are ups and downs in Monkeyman’s 2012 Simian Showcase but it’s most definitely an enjoyable evening where the highs easily outweigh the lows.