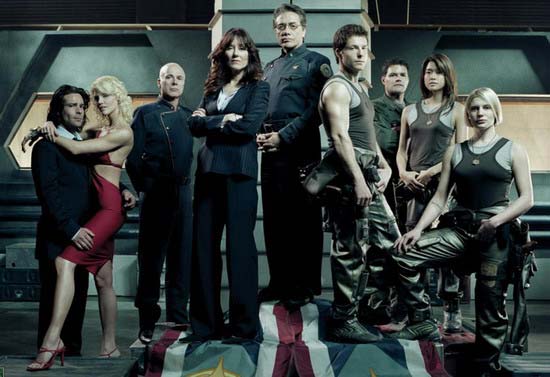 All of This Has Happened Before…

So it’s finally over. The semi-epic ride that was Battlestar Galactica‘s 4 seasons is done; no more big cylon reveals, no more coming back from the dead, no more hallucinogens/angels, and especially no more gratuitous naked shots of Jaime Baumber. It’s a sad state of affairs.

So how’d it go out? Well, I’m of two minds about this. I like to call them Optimist Rachael and Critical Rachael. (spoilers, obviously, ahead)

CRITICAL RACHAEL:
The thing is, it was kind of stupid. They find a new planet (which they, in uber-cop-out mode rename Earth) which has the unlikely beginnings of a new mankind on it (which they write away as a miracle) and decide to stay there. Oh but wait. Even worse. They think, you know what sucks? Technology. Technology sucks. Especially medicines. So they decide to stay there and go full native. Also, apparently they decide that “going native” requires Adama to abandon Lee to go hang out alone with Roslin’s grave. Starbuck, a character they spent episode upon episode building into a complex fascinating woman, disappears into the wind. We’re left to believe Baltar’s semi-crazy explanation that she’s an angel. They basically undo all the cool psychologically fracked up awesomeness in favor of some cover-all religiosity. In fact, a lot of this episode can be seen as bad writing being covered up with religious angles (and angels). What’s with all the coincidences? Oh it’s God. Why is Starbuck back? God wanted her to be. Why did Caprica Six, Roslin, and Athena share visions of the Opera House? I’m still not sure why that was helpful to the Big Man’s plan, especially since while it was all going down it either distracted our main characters or they did what they would have anyway, but either way, it’s thanks to God. The religion stuff would work better if I was certain the writers were in control of it, but too often it comes across as a weak crutch. In a lot of ways, this episode embodied the reasons why BSG would have been better served if Ron Moore had an endgame in mind when he first thought about rehatching Battlestar Galactica as a strange, complex, allegorical world.

OPTIMIST RACHAEL:
But the thing is, you’ve got to be amazed by a finale that cares so deeply about it’s characters, that despite the whizzes, booms, and explosions of its first hour, it devotes the majority of its finale to these characters. Not to new revelations, or new developments. It just gives us them, and provides the audience with a final goodbye to the characters they’ve fallen in love with. And with the (very important) exception of Starbuck’s, these goodbyes feel real and moving. Watching Adama lovingly talk to Roslin’s grave is a huge testament to what they’ve built together on the show. Sure, Baltar has done countless awful, selfish things, but it still feels so… fulfilling to see him and Caprica head off into the sunset. And Athena and Helo, despite Athena’s protests last week that everything “is not going to be okay, Karl,” wander off through the technology-less Eden with baby girl/cylon Hera in tow, who as we find out in a pretty cool flash forward 150,000 years, is the mitochondrial Eve for human civilization.

CRITICAL RACHAEL:
Which is all well and good, except that it didn’t make for particularly exciting television. The flashbacks started in last week’s episode didn’t prove anymore revelatory than they seemed (Lee was fighting that bird, and drunk, because him and Kara smooched while his bro was passed out on the couch. Lee and Kara are skanks, not exactly a big reveal). And the happy, science fictiony endings were completely out of touch with a show that was as grounded in realism as it was in mythology. The battle was cool and all, but ultimately it kind of invalidated the evil of Cavil and co. to have Cavil simply blow his own brains out and to have the whole Cylon/human peace thing by foiled by the fact that Tori killed Callie so many episodes ago. Maybe if this capriciousness of fate felt planned I wouldn’t be quite so annoyed by the deus ex machina of it all, but it didn’t. It felt like a strange plot twist that we weren’t meant to see coming, but that seemed oppressively obvious when I looked at the time and saw that we still had over an hour left in the show. On top of that, why was Hera SO important if all the cylons (the good ones, anyway) and the humans were just going to go to earth, presumably intermate (I’d say Six and Baltar are bound for a few offspring, and Helo and Athena are probably up for it, not to mention the thousands of others out there) and on top of that sleep with the natives, eventually spawning mankind? I get the poetic justice of having all of humanity as we know it be part cylon (half cylon, in fact, if Hera really is our mitochondrial eve, although I’m not sure what that would entail, and seems kind of confusing if you think about it for too long), but it made the journey to getting us there seem less significant.

OPTIMIST RACHAEL:
It’s kind of like the show made the same huge switch on us as Head Six (angel Six?) made on Head Baltar (Angel Baltar?). At the very end of the episode, Head Six drylynotes the similarities between modern Earth society and Kobol, Caprica, the first Earth, etc., “All this has happened before. The question, then, is will it happen again?” Head Six decides she doesn’t think so, and Head Baltar is surprised by her optimism. I was likewise surprised by the unrelenting optimism at the end of a show that was less about happy, shiny, space-age ideals than it was about the crushing nature of reality and often self-defeating nature of humanity. We can see this as a defeat of the very realistic principles that drew us to BSGin the first place. But you’ll notice I put this under Optimist Rachael, because I like to think of it more as Ron Moore’s unrelenting belief in a light at the end of the tunnel. He spent a whole series showing us how dark the human psyche can be, literally dragging us through mud and blood, but the ending was nothing sort of redeeming.

I’ll let Optimist Rachael get in the last word, because I truly loved being a part of this series, and I think that this is a finale that may grow in my esteem once the pressures of hype and revelation are off it. Until next time, so say we all.