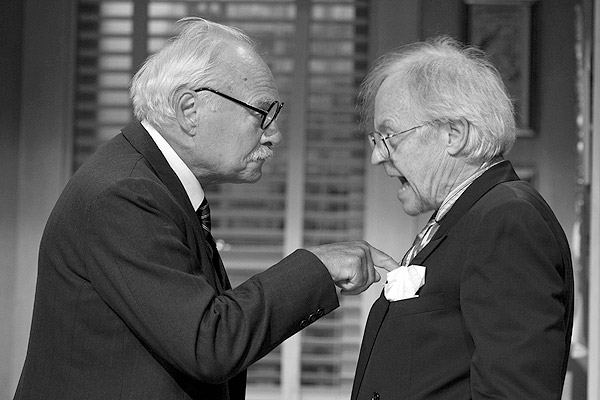 It drags in a middle but The Sunshine Boys is the best comedy Soulpepper’s done since they last did Neil Simon (in last season’s The Odd Couple). Simon is hilarious, with a wonderfully human touch of sadness, and the seasoned, naturalistic Soulpepper company fits perfectly with his style. Ted Dykstra smartly doesn’t add too much to Simon’s smart, under-produced script and the comic heft of his well-assembled cast. He hands Eric Peterson the reigns and 2+ hours later the audience emerges from The Michael Young Theatre with that odd combination of tears from both heartfelt laughter and nagging sadness.

I’ve seen Eric Peterson before. I’ve even see Eric Peterson be very good before. But I’ve never seen Eric Peterson this great before. Willie Clark is the key role in The Sunshine Boys and by far Simon’s best written in his story of a retired vaudeville duo’s bitter reunion, and Peterson gives it everything he has with the guts and energy of a man 40 years his junior. As the pitifully stubborn shut-in, Peterson is at once adorably funny, frustratingly tough and depressingly bitter. The slow unravelling of his and Al Lewis’s complicated past reveals Willie’s accusatory sense of betrayal and the honest-to-god affection he had for his former partner (the extent of the bitterness could only be possible if the affection was great). Kenneth Welsh is less special but still pretty funny in the smaller role of Al- the other half of “Lewis and Clark”, The Sunshine Boys. Welsh’s Al doesn’t have the layers of Peterson’s Willie and thus gets a little swallowed by his stage partner. He does, however, look like a sort of Monopoly Man- Col. Sanders hybrid, which is fairly amusing.

As for the rest of the cast, the great Oliver Dennis has a part so little you’d think they could have found someone to do it who wasn’t OLIVER DENNIS. It’s a testament to the team dynamic at Soulpepper that one of their most lauded leading men would take a bit part but it also made me wish he had more to do since he’s inarguably entertaining and might have lifted the slow middle to higher heights. Quancetia Hamilton is funny if predictable in her Soulpepper debut. I’d never seen her before but what I mean by predictable is that she’s every discontented but sassy, overeating nurse ever- which is not to take away from her comic timing. The only other important character (it’s really a 3 man show with a couple bit parts) is Ben, Willie’s well-meaning nephew/agent, played with great exasperated sincerity by Jordan Pettle. Between this and Speed-the-Plow, Soulpepper’s summer season has me wondering where the heck Jordan Pettle has been all my life! He’s great in a quick-talking, understatedly interesting kind of way and each character is differentiated without being obviously hugely different (he’s playing an NYC agent and an LA producer in rep but Ben’s family-man qualities come out over Charlie’s ambitious loyalty). I could watch Pettle all day (which goes a long way towards helping in this production’s slower bits, ie: whenever Peterson isn’t commanding the stage).

The Sunshine Boys is a lovely piece of theatre. Led by Eric Peterson’s standout performance, it’s got as much heart as it does laughs (meaning many).